Klapp ( Clapp) Family who emigrate as Protestants from the Palatine (Pfalz) area of Germany and who laned 27 September 1727 in Philadelphia, Pennsylvania 14 family members were on the James Goodwill, with David Crockett as ship's Master which sailed out of Rotterdam

There were two main groups of Clapp immigrants to America, the English Clapps of New England, and the German Clapps mentioned here, and they have no relationship to each other.

John Ludwig Clapp and his brother, George Valentine Clapp, sailed from Rotterdam on the ship James Goodwill in the year 1727 and landed in Philadelphia, Pennsylvania, September 27, 1727. George signed the passenger list as "Jorg Klap" and John's name appears as "Ludowick Clap" or "Ludowigh Clap".[1] Neither is shown with any family, but, a Joseph Clap is shown on the same ship with a family of 14. George and John settled initially in Pennsylvania before moving to North Carolina. George's son John Phillip Clapp was born in Oley, Berks county, Pennsylvania.

Click HERE for information on the Palatinate region of Germany.

William A. Brobst wrote the following about Palatinate emigration:

"The religious Thirty Years War, with its bloodshed, murder, robbery, and pillage, raged on from 1619 to 1648, and was disastrous to the Palatinate. Although the war "ended" in 1648, the repressive effects lasted for a century.... By the time the early 1700s had come along, the Palatine Germans had had enough of poverty, sickness, starvation, freezing, and being caught in the middle between the warring French and German troops. The Palatines had enough. They looked westward. They packed up, floated down the Rhine to Rotterdam, and headed for America."[2]

To find out more about German immigration to America, click HERE.

"The Germans, who settled east of the Scotch-Irish [in Guilford county], had come from the Palatine, driven by the scourge of war from what was once their happy home. Up the Rhine from Cologne the Thirty Years' War had left terrible devastation. Thousands of these people came to America upon William Penn's invitation."[4]

It is an historic fact that many families from what is now present-day Germany immigrated to the British colonies in the early eighteenth century; their Protestant faith was almost as important as their nationality. The British government looked favorably on the prospect of immigration from other countries in Northern Europe as long as they were of the Protestant and not Catholic faith. An exception would have to be Maryland, which was colonized by many British Catholics. William Penn was receptive to allowing Germans to settle in Pennsylvania. [5]

The Palatine German immigrant families that moved to North Carolina were an insular, cautious group, that married only within their German family communities, and avoided politics, in the early years. In view of what these people had endured in the seventeenth and eighteenth centuries, it is no wonder they had this cautious approach in their new land. In contrast, the Quakers and Presbyterians of Guilford county were active in politics.

The Clapp family was instrumental in the establishment of the Brick Church. Here are pictures of the restored Brick Church and its interior, and also HERE with some of the remaining gravestones.

Welker has this to say about the Clapp church:

"The immigrants to this region, now making parts of Alamance, Guilford and Randolph Counties, came in wagons by the emigrant route of those days from Philadelphia, through Pennsylvania, Maryland, and Virginia, bringing their household furniture and farming tools – accompanied by young men coming to seek their fortunes in this new country. These came mostly from the counties of Berks, Lancaster, and Schuylkill and a few from Maryland from 1745 to 1760 perhaps. This was then Orange and Rowan, and these German settlements were made on the waters of the Haw River and its tributaries, Alamance, Reedy Fork, Beaver Creek, Stinking Quarter, Sandy Creek, etc. These were the Albrights, Clapps, Fauts, Holts, Sharps (Scherbs), Laws, Graves (Greff), Summers, Cobbs (Kaubs), Cobles, Swings {Schwenks), Cortners (Gaertners), Ingolds, Browers, Keims, Staleys, Mays, Alnicks (Emigs), Smiths, Stacks, Neases, Ingles, Leinbergers, Straders, Wyricks, Anthonys, Schaeffers (Shepherds), Weitzells, Trollingers, Longs, Weys, Shaffners, Fogelmans, Sthars, Brauns, Reitzells, with others.

"Their first place of worship was in a log cabin near where Laws Church now stands, on the old road from Hillsborough to Salisbury, now in southwest corner of Guilford County. It was a Union Reformed and Lutheran Church. This union was brought to an end by the divergent sentiments growing out of the sentiments and feelings that culminated in the Regulation movement and the rebellion of the Colonies. Rev. Samuel Suther, who had recently come from the County of Mecklenburg, an advanced patriot, was the Reformed pastor, and under his inspired guidance the Albrights, Goertners, Clapps, Fausts, Scheaffers, Ingolds, Schwencks and Leinbergers, who were of the Reformed stock, at once moved to a school house near where the Brick Church now stands, and there, undisturbed by factional differences, erected an altar where to serve God. Suther was pastor until the close of the war, and was the animating spirit of the community. Soon this small log house gave way to a larger and more comfortable place to worship, whose corner Stones a few years since could still be seen. In these years Clapp and Christian Faust were Elders, and Ingold and Leinberger deacons, and even in these dark years the Church grew and was prosperous. [6]

In 1828, the pulpit service was heard in the English language for the first time. For the welfare of the church this was none too soon. In 1841, Rev. G. William Walker took charge. It is a large congregation, mostly posed of the descendants of those early emigrants from Pennsylvania. In the grave yard hard by the church rest in unmarked graves Tobias Clapp and Peter Goertner, who were in the Regulation battle; and there also sleeps Capt. Wm. Albright, Barney Clapp, and Matthew Schwenck and others, who were soldiers in the War of Revolution, and the passerby who stops to read may find other humble graves of noble men, and that of George Goertner (Cortner), who was the civil leader of the community of Germans.

"The church which the Scherrers (Sherer, Shearer) attended, and which the Goodners must have also, was the Frieden Church, located some two miles north of the present village of Gibsonville, in the eastern part of present Guilford County. It is now a Lutheran Church and has been for many years. but in its early days it was also used by the German Reformed people. This church was organized in 1745. although there were some German settlements in the neighborhood as early as 1740. The early records of the church were lost. In 1771 it was re-organized and a second church building was erected. To this church went Jacob Daniel Scherrer and his family. and Jacob Daniel lies buried in the churchyard. with a marker put on his grave by his grandson, Rev. Simeon Scherer.

"This part of the county is a beautiful rolling countryside. In this area lived the Wyricks (Wiricks). Tickles, Summers. Tades. Smiths. Goodners and others. It is pleasing to think. and logical to suppose. that in this church Conrad Goodner and Elizabeth Scherer met and were married in the year 1782. Here also marriages of the other Goodners may have been consummated. The old log building has long since disappeared. and a new modern church now stands across the road from the churchyard, the whole kept in a very good condition.

"Frieden means peace in German, and in naming their church Frieden Church. or Friedens Church, we have a good idea of what was in the minds of those early Germans. It was sometimes called "Shoemaker's Church", and it received that name by the following incident. A man by the name of Shoemaker was living within a few hundred yards of the church during the American Revolution. He was a Tory. He passed over the battle ground at Guilford Court House just after the battle. when General Greene had fallen back, and finding the British in possession, was going home. As he passed along a wounded soldier asked him for a drink of water but he refused to give it. A squad of soldiers followed him, took him from his house, made him stand on the door step at the north door, and there shot him to death.”

"The earliest settlers around Greensboro. North Carolina, were English and Welsh Quakers, German Calvinists & Lutherans, and Ulster Scot Presbyterians. They were small freeholders. The city of Greensboro occupies part of the original grant of 1749 from John Carteret, Earl of Granville, to the Nottingham Company for settlement of a colony of Ulster Scot Presbyterians on the waters of North Buffalo and Reedy Creek. To the east on Stinking Quarter Creek, a German colony settled at the same time. Guilford County was also known as Unity Parish, and was formed in 1770 but the act did not become effective until April 1st, 1771.[7]

The Battle of Clapp's Mill

Other Links and References

The German and Swiss settlements of Colonial Pennsylvania - Google Books

BRICK CHURCH RECORDS transcribed from the original records by Rev. D. I. Offman

Click on the Changes page for the details of contributions and edits.

Is George Valentine your ancestor? Please don't go away!

ask our community of genealogists a question.
Sponsored Search by Ancestry.com
DNA Connections
It may be possible to confirm family relationships with George Valentine by comparing test results with other carriers of his Y-chromosome or his mother's mitochondrial DNA. However, there are no known yDNA or mtDNA test-takers in his direct paternal or maternal line. It is likely that these autosomal DNA test-takers will share DNA with George Valentine: 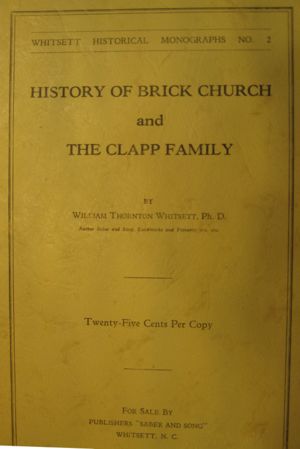 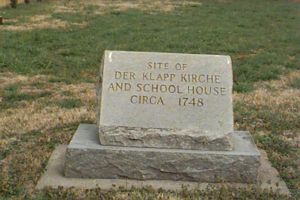 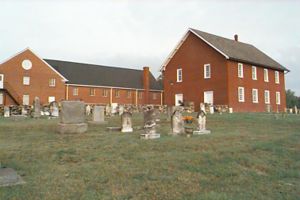 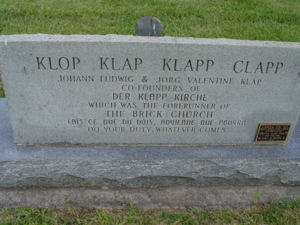 Manuela Thiele
Klapp-52 and Klapp-40 appear to represent the same person because: Potential duplicate
posted May 05, 2020 by Manuela Thiele

Brian Wilson
Clapp-281 and Klapp-40 appear to represent the same person because: Same descriptions, birth, wife. Spelling of Clapp/Klapp is known to vary- see Clapp-281 and headstone etc.
posted May 03, 2019 by Brian Wilson

George Valentine is 17 degrees from Mary McCauley, 24 degrees from B. W. J. Molier and 16 degrees from Henry VIII of England on our single family tree. Login to find your connection.