She first married and raised a family with Jacob Smith until he died in 1794. [2] She remarried, sometime after Jacob's death when she was in her fifties. She became the second wife of Philip Herman Knie/Knee/Kny who was her son-in-law Jacob Rhodes’s uncle. Jacob Rhodes married Catherine Smith. Phillip, born 6 March 1745, was the brother of Jacob Rhodes’s mother.[3]

Philip and Mary Agnes Knee had no children together. Each of them had many children from their first marriages. Philip died in Montgomery County, Ohio 15 Dec 1824.[4] Mary Agnes passed away in 1833. She is buried beside Philip Knee in Ehrstine Cemetery, Trotwood, Randolph Twp., Montgomery Co., OH.

The following children to be researched:

Agnes was the daughter of Johann Henrich Klappert and Anna Elisabeth Behr.[5]

ask our community of genealogists a question.
Sponsored Search by Ancestry.com
DNA Connections
It may be possible to confirm family relationships with Agnes by comparing test results with other carriers of her mitochondrial DNA. However, there are no known mtDNA test-takers in her direct maternal line. It is likely that these autosomal DNA test-takers will share some percentage of DNA with Agnes: 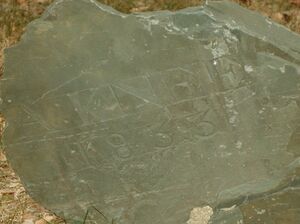 Darlene (Athey) Athey-Hill
No reliable source of which I am aware has her name as"Mary Agnes" or "Mary Agnesa". The sourced book lists her simply as Agnes. Her birth record, if it is the correct Agnes as noted in the Kny book, lists her as Agnesa Klappert, born in Prussia (modern day Germany):

posted on Klappet-1 (merged) Feb 16, 2022 by Darlene (Athey) Athey-Hill
[Living Sipe]
Klappert-13 and Klappet-1 do not represent the same person because: There is no source material for Klappet -1 to confirm they are the same Klappert-13 has been erroneously altered by someone merging who added children of her second husband who were not born to her. She only had children by her first husband J. Smith as I started in my bio and research for her profile. I doubt that Klappet-1 would appreciate the tree being altered this way anymore than I do since that profile does not even mention Philip Knee as a second husband.
posted on Klappet-1 (merged) Feb 08, 2022 by [Living Sipe]
Joel Bridgham
First of all, the absence of a husband does not mean that the profiles are different. It only means the researcher hadn't discovered Klappert-1's other husband. Furthermore, "Knee" is mentioned as an "aka" in the profile's name. You should fix the "extra children" on Klappert-13; just remove them. And it looks like the two Jacob Smiths on Klappert-13 are the same (with different death dates), so merge them. Also Klappet-1 lists John Smith (1782-1860) matches the same John Smith in Klappert-13's Biography. With some fixing up (which you say is needed), these two profiles are for the same person. Finally, there needn't be documentation if the match is obvious. I'm putting this merge in "Unmerged Match" state for more review.
posted on Klappet-1 (merged) Feb 11, 2022 by Joel Bridgham
Joel Bridgham
Klappet-1 and Clapper-58 appear to represent the same person because: I will leave it up to the profile managers to determine the correct spelling of the surname.
posted on Clapper-58 (merged) Dec 02, 2021 by Joel Bridgham
Phyllis (Arnold) Wright
Clapper-506 and Clapper-58 appear to represent the same person because: I had JUST created her profile when I was getting ready to create one for Philip and found he already had one, being the spouse. I plan on putting 1764 as the marriage date because that is what is on famlysearch.org (my main source) but will leave your alone because, well, you're probably closer to being correct and there is no reference for marriage to either Philip or John Smith (her other husband). According to familysearch.org, she had 11 children with John and Philip had 8 children with his first wife, Catherine. Hopefully we can work together and get this all straightened out. Keeping fingers crossed!!!
posted on Clapper-58 (merged) Jun 15, 2021 by Phyllis (Arnold) Wright