Gustav Klimt, who never married and lived with his mother until her death, only three years before his own, was the subject of countless rumours in Vienna at the turn of the century with regard to his affairs with his models and with the upper-class women who commissioned portraits from him. Although photographs of the artist - usually dressed in a painter's smock that resembled a monk's habit - often portray him as severe and distanced, Klimt is said to have fathered fourteen illegitimate children. Another enigma is his lifelong bond with Emilie Flöge. When their correspondence was discovered, decades after his death, it did not actually shed any light on their relationship; instead it seemed to be limited to the communication of routine, trivial information. But it nonetheless was the expression of a decades-long, deep attachment between Emilie Flöge and the painter.

Regardless of how much truth there was to the many rumours, however, there were times when events reached the point where Klimt himself, as he once admitted, was not entirely clear about his relationships. When he fled Venice and returned to Vienna after the altercation over his advances toward Alma Schindler, who later became Alma Mahler-Werfel, he did not forget to immediately telegraph Emilie Flöge to notify her of his arrival. He may have also recalled that two of his models were about to give birth to children he had fathered.

Gustav Klimt (July 14, 1862 – February 6, 1918) was an Austrian symbolist painter and one of the most prominent members of the Vienna Secession movement. Klimt is noted for his paintings, murals, sketches, and other objets d'art. Klimt's primary subject was the female body, and his works are marked by a frank eroticism. In addition to his figurative works, which include allegories and portraits, he painted landscapes. Among the artists of the Vienna Secession, Klimt was the most influenced by Japanese art and its methods.

Early in his artistic career, he was a successful painter of architectural decorations in a conventional manner. As he developed a more personal style, his work was the subject of controversy that culminated when the paintings he completed around 1900 for the ceiling of the Great Hall of the University of Vienna were criticized as pornographic. He subsequently accepted no more public commissions, but achieved a new success with the paintings of his "golden phase", many of which include gold leaf. Klimt's work was an important influence on his younger contemporary Egon Schiele.

Gustav Klimt was born in Baumgarten, near Vienna in Austria-Hungary, the second of seven children—three boys and four girls. His mother, Anna Klimt (née Finster), had an unrealized ambition to be a musical performer. His father, Ernst Klimt the Elder, formerly from Bohemia, was a gold engraver. All three of their sons displayed artistic talent early on. Klimt's younger brothers were Ernst Klimt and Georg Klimt.

Klimt lived in poverty while attending the Vienna School of Arts and Crafts (Kunstgewerbeschule), where he studied architectural painting until 1883.[4] He revered Vienna's foremost history painter of the time, Hans Makart. Klimt readily accepted the principles of a conservative training; his early work may be classified as academic. In 1877 his brother, Ernst, who, like his father, would become an engraver, also enrolled in the school. The two brothers and their friend, Franz Matsch, began working together and by 1880 they had received numerous commissions as a team that they called the "Company of Artists". They also helped their teacher in painting murals in the Kunsthistorisches Museum in Vienna.[4] Klimt began his professional career painting interior murals and ceilings in large public buildings on the Ringstraße, including a successful series of "Allegories and Emblems".

In 1888 Klimt received the Golden Order of Merit from Emperor Franz Josef I of Austria for his contributions to murals painted in the Burgtheater in Vienna. He also became an honorary member of the University of Munich and the University of Vienna. In 1892 Klimt's father and brother Ernst both died, and he had to assume financial responsibility for his father's and brother's families. The tragedies also affected his artistic vision and soon he would move towards a new personal style. Characteristic of his style at the end of the 19th century is the inclusion of Nuda Veritas (naked truth) as a symbolic figure in some of his works, including Ancient Greece and Egypt (1891), Pallas Athene (1898) and Nuda Veritas (1899). Historians believe that Klimt with the nuda veritas denounced both the policy of the Habsburgs and the Austrian society, which ignored all political and social problems of that time. In the early 1890s Klimt met Austrian fashion designer Emilie Louise Flöge (a sibling of his sister-in-law) who was to be his companion until the end of his life. His painting, The Kiss (1907–08), is thought to be an image of them as lovers. He designed many costumes she created and modeled in his works.

During this period Klimt fathered at least fourteen children.

In 1911 his painting Death and Life received first prize in the world exhibitions in Rome. In 1915 Anna, his mother, died. Klimt died three years later in Vienna on February 6, 1918, having suffered a stroke and pneumonia due to the worldwide influenza epidemic of that year. He was buried at the Hietzinger Cemetery in Hietzing, Vienna. Numerous paintings by him were left unfinished.

Klimt's paintings have brought some of the highest prices recorded for individual works of art. In November 2003, Klimt's Landhaus am Attersee sold for $29,128,000, but that sale was soon eclipsed by prices paid for Willem de Kooning's Woman III and later Klimt's own Adele Bloch-Bauer II, the latter of which sold for $150 million in 2016.

In 2006, the 1907 portrait, Adele Bloch-Bauer I, was purchased for the Neue Galerie New York by Ronald Lauder reportedly for US $135 million, surpassing Picasso's 1905 Boy With a Pipe (sold May 5, 2004 for $104 million), as the highest reported price ever paid for a painting up to that point.

On August 7, 2006, Christie's auction house announced it was handling the sale of the remaining four works by Klimt that were recovered by Maria Altmann and her co-heirs after their long legal battle against Austria (see Republic of Austria v. Altmann). Maria Altmann's fight to regain her family's paintings has been the subject of a number of documentary films, including Adele's Wish. Her struggle also became the subject of the dramatic film the Woman in Gold, a movie inspired by Stealing Klimt, the documentary featuring Maria Altmann herself. The portrait of Adele Bloch-Bauer II was sold at auction in November 2006 for $88 million, the third-highest priced piece of art at auction at the time. The Apple Tree I (ca. 1912) sold for $33 million, Birch Forest (1903) sold for $40.3 million, and Houses in Unterach on Lake Atter (1916) sold for $31 million. Collectively, the five restituted paintings netted more than $327 million.[32] The painting Litzlberg am Attersee was auctioned for $40.4 million at Sotheby's in November 2011.

The city of Vienna, Austria had many special exhibitions commemorating the 150th anniversary of Klimt's birth in 2012.

Gustav Klimt - Beech Grove I: According to the writer Frank Whitford: "Klimt of course, is an important artist—he's a very popular artist—but in terms of the history of art, he's a very unimportant artist. Although he sums up so much in his work, about the society in which he found himself—in art historical terms his effect was negligible. So he's an artist really in a cul-de-sac." Klimt's work had a strong influence on the paintings of Egon Schiele, with whom he would collaborate to found the Kunsthalle (Hall of Art) in 1917, to try to keep local artists from going abroad. Artists who reinterpreted Klimt's work include Slovak artist Rudolf Fila.

Cultural influence: Several of Klimt's most famous works from his golden period inspired the title sequence for the animated adaptation of the manga series, Elfen Lied, in which the art is recreated to fit with the series' own characters and is arranged as a montage with the song "Lilium". The opening to the anime Sound of the Sky also is largely inspired by Klimt's works, which was also directed by the same director as Elfen Lied. The design of the land of Centopia on the TV series Mia and Me is inspired by Klimt's works. The art of the video game Transistor also uses patterns and embellishments inspired by Klimt.

Gustav Klimt and his work have been the subjects of many collector coins and medals, such as the 100 Euro Painting Gold Coin, issued on November 5, 2003, by the Austrian Mint. The obverse depicts Klimt in his studio with two unfinished paintings on easels.

In 2012, the Austrian Mint began a five-coin gold series to coincide with the 150th anniversary of Klimt's birth. The first 50 Euro gold coin was issued on January 25, 2012 and featured a portrait of Klimt on the obverse and a portion of his painting of Adele Bloch-Bauer.

Gustav Klimt Foundation: In 2013, the Gustav Klimt Foundation was set up by Ursula Ucicky, widow of Klimt's illegitimate son Gustav Ucicky, with a mission to "preserve and disseminate Gustav Klimt's legacy." The managing director of the Leopold Museum, Peter Weinhäupl, was appointed as Chairman of the foundation. As a reaction, the museum's director Tobias G. Natter resigned in protest, citing Ucicky's past as a Nazi propaganda film-maker.

Ownership battle: National Public Radio reported on January 17, 2006 that "The Austrian National Gallery is being compelled by a national arbitration board to return five paintings by Gustav Klimt to a Los Angeles woman, the heir of a Jewish family that had its art stolen by the Nazis. The paintings are estimated to be worth at least $150 million." This incident was subsequently made into a Hollywood movie, Woman in Gold.

Is Gustav your ancestor? Please don't go away!

ask our community of genealogists a question.
Sponsored Search by Ancestry.com
DNA
No known carriers of Gustav's ancestors' DNA have taken a DNA test.

Images: 6
The Kiss by Gustav Klimt 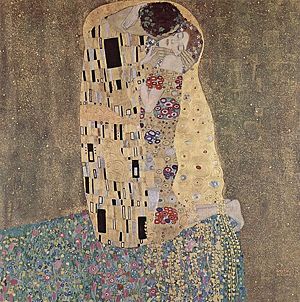 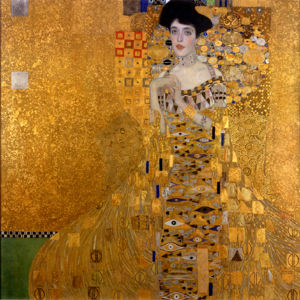 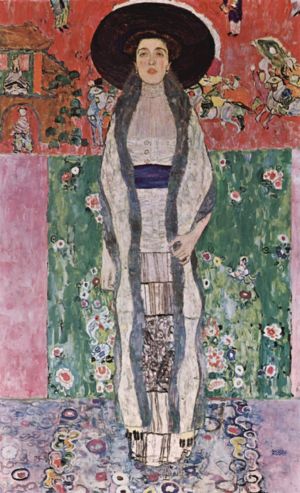 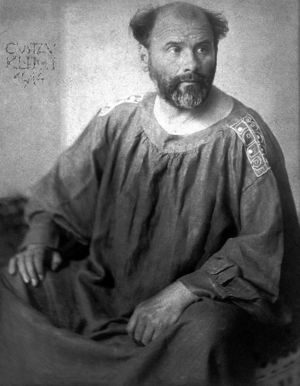 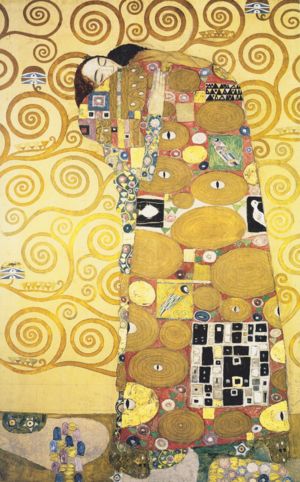