Sir Francis Knollys was born in about 1511, the son of Robert Knollys and Lettice Peniston. [2]

His first position at court was that of gentleman pensioner to Henry VIII, which was a reflection on the king’s favour to his father. In 1538, Henry extended his favour to Francis, securing him in fee, the estate of Rotherfield Greys, near Henley on Thames, Oxfordshire. [2]

On 26 April 1540 he married Catherine Carey, daughter of William Cary and Mary Boleyn. It is believed that the two might have met in November 1539 as both appear in the Letters and Papers of Henry VIII. Francis is recorded as one of the men sent to greet the king’s fourth wife, Anne of Cleves, upon her arrival at Calais and Catherine is named as one of the young women delegated to meet Anne once she arrived at court. [3] [4]

Knollys became a Member of Parliament in 1542. [5]He also embarked on a military career, serving with the King at the siege of Boulogne in 1544. After King Henry's death, he accompanied the Lord Protector, Edward Seymore to Scotland as part of the 'rough wooing' to forcibly arrange the marriage of the young King Edward to the four year old Mary, Queen of Scots. Francis distinguished himself at the Battle of Pinkie Cleugh and was knighted on the battlefield by Seymore. [6][7]

Francis and Catherine's family grew prodigiously during the 1540s and 1550s. Their children, reputedly recorded in a family book by Francis Knolly's own hand, included: [2] [8]

Under King Edward, Francis' career continued to progress. In 1547 he became a JP in Oxfordshire. He also became custodian of Wallingford Castle in 1551. [9]

It is known that while at court, Francis engaged in recreational pursuits suitable for a gentleman of his status. On Christmas Day in December 1539, at Calais: ‘after dinner Sir George Carew and Knollys ran together at the tilt’. In 1543 it is recorded that Francis ‘ran the ring’: a pursuit similar to tilting, but with the aim of getting a spear through a ring suspended above the contestants. [2] In 1552, it was recorded that Francis took part in two tilts, one of which was with his brother Henry.[6] In the same year, Edward VI granted Caversham Park, Oxfordshire to Francis and his heirs.[10]

Francis was committed to the reforming Protestant church and his children were brought up with strict guidance in this form of the faith. His daughters in particular were enjoined to godliness and orderly maintenance! He gained a reputation for serious behaviour both at court and with his own family. [6] This adherence to the Reformed Church was a catalyst for many of the later events of Francis' life and career.

With the death of the young King, powerful factions worked to control the crown of England. Francis did not participate in the coup to place Lady Jane Grey on the throne, even though he was very concerned about Queen Mary's Catholic leanings. The idea of a Catholic England evidently repulsed Francis and so, with his twelve year old son Henry, he departed from Dover in Sep 1553 and made for Geneva. It is believed that they conducted a Protestant mission to meet with John Calvin. Francis and Henry had returned home by the autumn of 1554. [6] On 5 Feb 1555, under the orders of Mary Tudor, the first Protestant burnings took place in England putting Francis and his family in grave danger. In the summer of 1555 Francis once more left England for safety in Europe and by June of 1557 he, his wife Catherine and five of their children were in the German city of Frankfurt. Where the other six children were is not known. [6]

With the accession of Elizabeth Tudor to the throne, the star of Francis Knollys began to rise once more. According to Burke's, Sir Francis was high in favour with Queen Elizabeth I. He was a member of her privy council, vice-chamberlain of the royal household and employed on several important diplomatic missions. In 1568, was sent to Carlisle to take charge of Mary, Queen of Scots, who had just fled from Scotland. Afterwards he was in charge of the queen at Bolton Castle and then at Tutbury Castle. It is reported that he tried to amuse her by teaching her to read and write in English. [2] During his time at Bolton he complained that his income was not sufficient to support his status and his large family, however his request to the Queen for the manor of Ewelme was refused. He wrote to William Cecil stating that he would rather lower his position to meet his income than hope to raise his income to suit his position! [2] Catherine, his beloved wife, died on 15 Jan 1569 at Hampton Court Palace, while Francis was at Bolton guarding the Scottish Queen. [8] She was buried at Westminster Abbey in the following April at Royal expense. [2]

In the 29th year of the queen's reign, he was appointed as one of the judges to decide the fate of Mary Queen of Scotland. [11] It was subsequent to this role that he was appointed treasurer of the royal household, a role he held until his death. On April 23 1593 he was invested as a Knight, Order of the Garter (K.G.). [12] It was reported that her Royal Majesty alone placed the George around his neck and the Garter on his thigh accompanied by "most kind words and tears on all sides." [13]

He died on 19 July 1596 aged 82.[14] His funeral took place in Rotherfield Greys church on 18 Aug 1596. His lavish funeral included 82 poor men (one for each year of his age) numerous servants, stewards and chaplains, as well as important family members. [2] His will was proved on 5 Sep 1596 with his son William Knollys as sole executor. The will mentioned:

His will also made provision for a ring of gold, with a diamond worth £40 to be made and given to Her Majesty the Queen. [2]

His family are all depicted on a monument in the church of Rotherfield Greys, Oxfordshire.

ask our community of genealogists a question.
Sponsored Search by Ancestry.com
DNA Connections
It may be possible to confirm family relationships with Francis by comparing test results with other carriers of his Y-chromosome or his mother's mitochondrial DNA. Y-chromosome DNA test-takers in his direct paternal line on WikiTree: 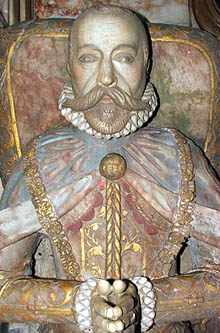 Illumination of Descendants of Hazard Knowles by Michael Steven Ford 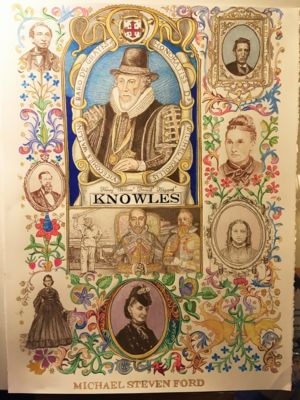 Robin Wood
I will leave the merge to the English Project group
posted Jan 07, 2021 by Robin Wood

John Elkin
Knollys-173 and Knollys-1 appear to represent the same person because: they have the same wife
posted Jan 05, 2021 by John Elkin

Elizabeth (Greet) Viney
I will be working on this profile, integrating the biography and adding inline citations, on behalf of the England Project Managed Profile Team. Please do let me know if you have any reputable sources that I could incorporate. This will be ongoing over the next week or so. Cheers, Elizabeth :-)
posted Feb 19, 2020 by Elizabeth (Greet) Viney

Amelia Utting
Knollys-160 and Knollys-1 appear to represent the same person because: These two profiles are clear duplicates; I have already proposed a merge of their wife Catherine, as she is a definite duplicate, and I am about to propose merges of their daughter Annes as they both were born on the exact same day, same location, with the same husband.
posted Mar 08, 2019 by Amelia Utting

Vic Watt
Knollys-138 and Knollys-1 appear to represent the same person because: Same name, same wife, same death. This is the top of a long line of duplicates.