Anne was the daughter of Sir Francis Knolles/Knollys/Knowles and Katherine Carey. [2]

As a result of her marriage, Anne Knollys was styled as Baroness De la Warr on 30 December 1595.[3]

Images: 1
A painting of Anne West (nee Knollys) by Robert Peak the Elder. 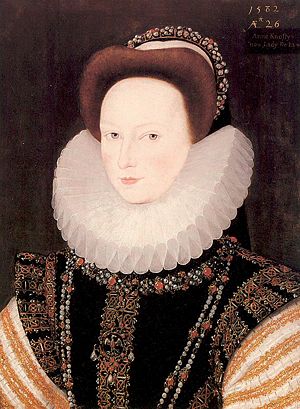 Leave a message for others who see this profile.
There are no comments yet.
Login to post a comment.
Edward Hogan III
My 11th Great-grandmother as well

Is Anne (Knollys) West the new contender to Queen Elizabeth II Windsor on connection counts .... Only time will tell

Amelia Utting
Knollys-159 and Knollys-11 appear to represent the same person because: Clear duplicate. I have already proposed merges of both parents.
posted Mar 08, 2019 by Amelia Utting