According to his father, Thomas was born on the Wednesday before Candlemas Day 1558. [1] He was the seventh, and youngest, of Francis and Catherine's sons.[2]

Sir Thomas Knollys was a commander in the Low Countries under Maurice, Prince of Orange during the Eighty Years' War, and, in 1568, was subsequently appointed as Governor of Ostend. [3] At about the same time as the receipt of his governorship, Thomas was knighted in the Low Countries by Lord Willoughby. [4]

In 1588 he was prominent in his aid to Peregrine Bertie at the seige of Bergen. In about 1589 Thomas married Odelia de Morada, daughter of the Marquis of Bergen,[5] and they had one known daughter, Penelope. [3]

Background information on the portrait of Sir Thomas Knollys

* WikiTree profile Knollys-54 created through the import of Newmans.ged on Nov 14, 2011 by Kathryn Newman. See the Changes page for the details of edits by Kathryn and others.

Images: 1
Portrait of a man, said to be Sir Thomas Knollys 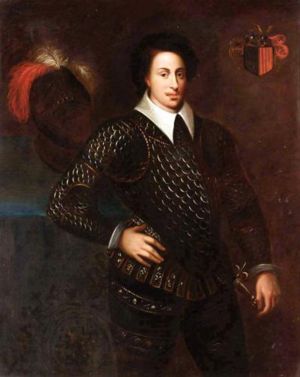