Father of Nicholas Knollys
Died 25 May 1632 at age 87 in London, Middlesex, England

William Knollys, was born on 20 Mar 1545. His birth was recorded by his father Francis as follows: Wyllyam Knollys was borne, anno domini, 1545. ye frydaye before owre Ladye daye in Lentt. [1] Lady Day or the Feast of the Annunciation is celebrated on 25 March. [2] His parents were Sir Francis Knollys, K.G. and Lady Catherine Carey, niece of Anne Boleyn, Queen of Henry VIII.

William's education was begun with Josceline (Julius) Palmer. [3] He then attended Magdalen College, Oxford, Oxfordshire, England. He "was created Master of Arts at Oxford on 27 September 1592."[4] When his father died in July 1596, William was named his main heir and sole executor of the will. [5] [6]

In April 1574, William married Lady Dorothy Bray, the widow of Edmund Brydges, Lord Chandos; a woman twenty years older then himself. Dorothy was the daughter of Edmund Braye, 1st Lord Braye and retained the title of Lady Chandos for the remainder of her life.

Unfortunately for Dorothy, William became infatuated with a girl 31 years his junior, one of the Queen's younger ladies in waiting, Mary Fitton. Although still married to Dorothy, he wrote Mary love letters, hoping to win her; but her interests lay with Wlilliam Herbert, 3rd Earl of Pembroke. Sir William was so obvious about his desire for Mary that ditties were written to lampoon him.

"Party Beard, party beard--the white hind was crossed: Brave Pembroke struck her down and took her from the clown, like a good woodsman."

His nickname of Party Beard, as well as mocking his puritanical attitude to court social occasions, was also given because his beard was three colors; white at the roots, yellow in the middle, and black at the ends.[7][8] [9]

This scenario, and the fact that as Comptroller of the Queen's Household he evidently ruled with some severity; frowning upon sporting events and revels, has led some scholars to believe that William Shakespeare may have partly modelled the character "Malvolio" in Twelfth Night after Sir William. Dorothy died 31 October 1605, at Minty, Gloucestershire, England, and was buried at Rotherfield Greys, Oxfordshire. [6] William and Dorothy had no surviving children; no doubt in part to Dorothy's age.

A few weeks after the death of Dorothy, Sir William married nineteen year old Lady Elizabeth Howard, the daughter of Thomas Howard, Earl of Suffolk and Katharine Knyvett. Sir William was 39 years older then Elizabeth. They had one daughter, born before 1610, who died as an infant. [6] [3]They possibly had another child, who also died as an infant. [6][3] Sir William and Elizabeth were married twenty-one years, and no surviving children were born until Sir William was in his 80s. When he was approved by Parliament in 1628 as Earl of Banbury, he was assumed to be without heirs. Yet, his wife had a son, Edward, on 10 April 1627. Five weeks after the death of Sir William, Elizabeth married Edward Vaux, 4th Lord Vaux, and a son Nicholas was born on 3 January 1630/1.

There was litigation after his death relating to the succession of his honours due to the reputed illegitimacy of his youngest son, the 3rd Earl of Banbury. The Parliament members assumed that a man as old as Sir William couldn't have been the father of Edward and Nicholas. Edward was finally ruled legitimate. In 1661, Nicholas, Earl of Banbury, was ruled a 'legitimate person.' The battle continued over this issue into the 1800s.[6] [10][11]

Sir William Knollys wrote his will on 19 May 1630, it was proved on 2 July 1632. He left Elizabeth, the Countess of Banbury, everything except for a few legacies to servants. He didn't acknowledge any children in his will. Sir William died on 25 May 1632 in the home of Dr Grant on Paternoster Row, London, and was buried at Rotherfield Greys, Oxfordshire. [12][13]

Sir William was treasurer to James I. He was raised to the peerage of Baron Banbury and Viscount Wallingford by James I and then to Earl of Banbury by Charles I. [6]

A birthplace of France was previously listed for Sir William, but no sources have been found to support that. 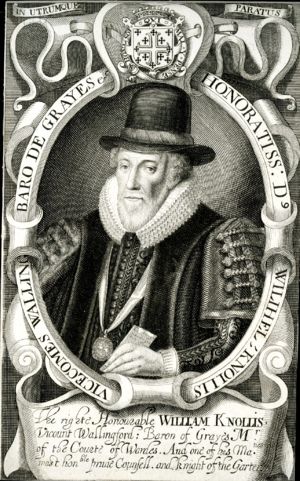 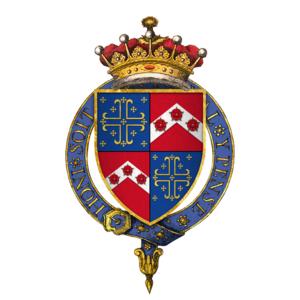 C. Mackinnon
Is there any source that says he was born in France? Surely a matter of interest but no one mentions it.
posted Apr 16, 2018 by C. Mackinnon