George Ernest Kreusler was born at Freeling on 18 April 1866. He was the first born child of William and Christianne Kreusler who ran a wheat buying business at Freeling. George was "taken under the wing" of his paternal grandmother, Jane Kreusler, who had very good connections with business and finance leaders in Adelaide. George attended (and boarded) Whinham College in North Adelaide as well as the School of Mines and Art School. Graduating with excellent results, George was destined for a life in finance and business. He entered the Practice of C Von Bertoch and Co in Adelaide and became a Licenced Land Broker. He also became the Secretary of the A N A, Australian Natives Association which a was very influential Mutual Society. George was an early member of North Adelaide Football Club and became its Secretary. George married Lina Mengersen On 28 January 1901 at St Stephens Lutheran Church in Wakefield St. George and Lina had 2 sons, Leo in 1902 and Oscar in 1905. In 1910, George was made a Partner in the land broking and surveying business, Kreusler and Moore.(see image) George changed his name from Kreusler to Waterford about 1916. It was a time of Anti German sentiment and the name change assured George of increasing security as a leading man in the City. (First mention in NLA Newspapers August 1916) George Waterford died 5 January 1931 and was buried at North Rd Cemetery. MH 2015

ask our community of genealogists a question.
Sponsored Search by Ancestry.com
DNA Connections
It may be possible to confirm family relationships with George by comparing test results with other carriers of his Y-chromosome or his mother's mitochondrial DNA. However, there are no known yDNA or mtDNA test-takers in his direct paternal or maternal line. It is likely that these autosomal DNA test-takers will share DNA with George: 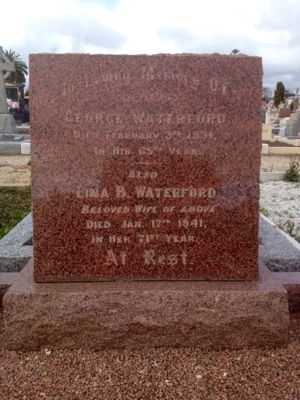 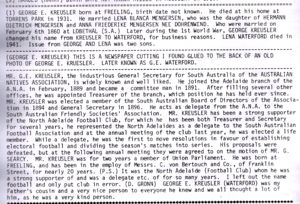