“[Oliver LaMere] had three sons, Moses, Joseph and Frank, and two daughters, Elizabeth and Mary. Elizabeth was the mother of Angel Decora. Frank Lamere went to Nebraska with the tribe. He had five sons, Oliver, Joseph, Charles, John and Peter.” (Jipson, 256-257)

"John Lamere was a member of the Third Division of the American Expeditionary Forces in the late war [WW I]. He took part in all the battles and was discharged with honorable mention." (Jipson, 257)

Military records show that John (Service Number: 550399), the son of Frank Lamere of Winnebago, Nebraska, and his unit, Company H 38th Infantry, 3rd Inf. Div., departed Hoboken, New Jersey for France on 29 Mar 1918 on the ship Mount Vernon. While in France, he saw considerable action, and was promoted to Corporal. He was involved in the following campaigns (Find a Grave):

His Death Certificate shows his exact dates of birth and death. It says that he died at St. Joseph Hospital in Sioux City, Iowa of a fracture of the front of the skull. It does not say whether this was as a result of assault or an accident. At the time he was a laborer living on the reservation in Winnebago, Nebraska.

He was buried at the Catholic Cemetary in Winnebago, Nebraska on 16 May 1923. 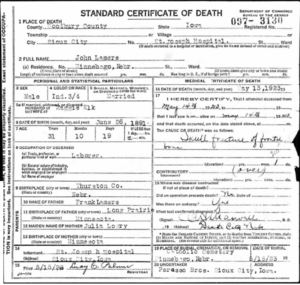