At the time of the following event there was in Blanco County, Texas a small (now ghost) town with a post office, named Sandy. Today, though no evidence of a town remains, it is located at the intersections of Ranch Roads, routes 1323/1320 west of US-281, a few miles north and west of Johnson City. With Google Map you can easily find the unpaved Sandy Cemetery Road off Ranch Rd 1320, heading south toward the Pedernales River. (locals say "Perdenales/Perd'nales") The old Sandy Cemetery named in this article is located about 0.4 mile south...off Ranch Rd 1320.

In response to an inquiry to the Blanco City offices, the Lackey Hanging Tree is still alive in 2016, on undisclosed Private Property. My search leads me to believe that it is located on the north side of Rte1623 (Fourth Street, River Road, Old Rte 66), very close to the road, 4+ blocks west of US-281in the town of Blanco. See it for yourself on Google Maps. [Garrett-4589] 15:18, 20 July 2016 (EDT) (This assumption does not completely align with some descriptions of the location. If anyone has better information, please add it here. Rhitt Garrett-4589) (Added note: But the tree shown is located only a few hundred yards from where Al Lackey is/was buried,)

There are more than one version of this story on the web. An excellent example is:

Another, reproduced below, is taken from:

Al Lackey was lynched August 26, 1885 for the murder of six of his family and relatives:

Lackey Murders & Lynching, from Blanco County History by Moursand, and others, including the account as given in the Blanco News and reprinted in Frontier Times magazine, Bandera, Tx. April 1936 by Mr. Lee Brown. What is printed here is an account written by Mr. Lee Brown. (The spelling and punctuation have been lightly edited for clarity.):

The Lackey Tragedy in Blanco County

On August 24,1885, witness the most dire tragedy of the history of Blanco county. On the morning of that day, Al Lackey, maddened or demented, slew six of his immediate family or relatives on the Perdenales River and Hickory Creek, in the north end of the county. Saddling his horse and taking his Winchester rifle he started out to exterminate, seemingly, the entire Lackey connection.

Going up the valley, Lackey shot his niece (Fanny Stokes Lackey, repeated below) who was sitting near the front door of her little home, rocking and singing to her little baby. When the body was found lying on the floor, the baby was asleep against the body covered with its mother’s blood. His brother (Nathaniel Greenberry Jr, Berry) ran in endeavoring to escape, but tripped and fell. As he begged for his life, Lackey stuck the gun behind his ear and pulled the trigger.

Mr. and Mrs. Stokes (parents of Fanny Stokes, Charles C. Lackey's wife....Charles C. Lackey is Aley Pruit Lackey's son by first husband James Lackey... James was Albert Newton Lackey's older deceased brother... so Fanny was Aley's daughter-in-law... Fanny also was killed), an aged couple, fell before the fire of his rifle. Then Lackey's own daughter (Martha/Mattie) and another relative (Berry's wife, Isabel) were slain. Then to Lackey's chagrin, he found he had no more cartridges.

Lackey then rode back to his own home, where he tried to kill his wife and small baby with a knife. She managed to escape from the house and ran to a nearby thicket, where he chased her for some time. He finally gave up the chase, and she saw him slash his own throat. He seemed to back out after one deep gash had been cut, went to his horse, and getting into the saddle headed in the direction of Johnson City.

On the road he met a neighbor, Al Bundick, and asked him to ride to a spring with him. Bundick noticed that Lackey had a handkerchief to his throat but took it to be a red bandana. Lackey rode behind Bundick and shortly attacked him with his knife. Having the faster horse of the two, Lackey was able to cut his victim until he fell from his horse. Then Lackey again rode toward Johnson City.

Upon reaching town, Lackey told that Bundick had killed some of his family and had attacked him, but he had escaped after his throat had been cut by Bundick. A posse was formed to hunt for Bundick. But before it left town, a son of Lackey came in and told officers that his father had committed the crimes, and that he did not know how many were killed. Bundick was found and taken home where physicians attended him. He was badly cut but recovered after some weeks.

Mrs. Lackey told officers of her escape and seeing her husband cut his own throat. Six were dead and on August 25 the bodies were laid to rest in a little cemetery on Hickory Creek, some two miles below the Sandy post office. (added note: their gravesites are unmarked) Blanco was then the county seat, and Lackey was brought to jail here after physicians had sewed the deep slit in his throat.

On the afternoon of August 26, Charlie Cabaniss was coming in from the ranch on Miller Creek. Just beyond Brushy Top, he was overtaken by a large party '(75-80 by some reports) of men who told him he could wait with them, have an early supper, and come on to town with them. They ate supper at a spring some few hundred yards below the present crossing of highway 66.

Some time after dark, the group rode quietly into town, captured the officers before any demonstration was made, then silently and in order rode to the jail. A few citizens discovered something was wrong and found the mob at the jail. Phil P. Cage, knowing several of the leaders, advised them that a very sick woman was in a home near the jail and asked that no commotion be made. Some of the party thought he was trying to stop the lynching party, but the leader knew Mr. Cage well and told his followers to keep quiet.

He then led the way to the cell where Lackey was confined, told him that they had come for him to pay the price for his crimes, and opened the door to his cell. Lackey grabbed a large iron bucket that was in the cell, and would have brained the leader had the bucket not hit the top of the cell; he was overpowered and taken from the jail yard. It had been the intention of the party to get to Blanco in the afternoon and make a public hanging on the square, to a live oak tree which still stands at the southwest comer of the old courthouse building. But now they granted Mr. Cage's request.

The mob, supplemented by quite a number of people from this section, rode north (west) out of town. They went so quietly that very few knew that a new crime was about to be perpetuated in their midst, the only kind of its nature to darken the history of Blanco county. They stopped a mile north (west) of town. At the side of the road stood two large live oak trees. Someone suggested a limb on the nearest tree. But Lackey, who had held to stoic silence up to this point, looked up and said, "That limb is too low and almost over the road".

Another tree just a few feet away was selected, and the wagon in which Lackey was seated drove under the limb. The noose, which had been tied in the real hangman's knot, was placed about his neck. Someone had suggested shooting him on account of the deep cut in Lackey's throat. However, the rope was thrown over the limb.

As the wagon was started up, Lackey was told to jump from the chair in which he had been placed in standing position. But he failed to jump, and was dragged from the wagon by the rope on the limb. His neck was not broken, and strangulation ended the life. His only final request was to be permitted to return to the scene of the crime to finish his intended work of killing seven others.

As the body swung and turned in the night breeze, the rope untwisted and stretched until the feet almost touched the ground. Another rope was tied in the noose, and the body raised quite a distance higher. Afterwards, the main mob of people dispersed north, going back to their homes in and about the scene of the tragedy.

Next morning, August 27, Esquire Lewellyn Robinson held an inquest at the place of the hanging. Prof. W. H. Bruce made a pen sketch of the scene.

Lackey was a large man with iron gray hair and mustache. He looked a terrible and gruesome giant as he swung in the air, the rope having buried itself in the cut he had inflicted in his throat. The body was brought to town. Contract was made with John R. Robinson for the interment of the body. Lackey was buried in the southeast corner of the Robinson (now Alvin Wegner) field, very near First Baptist Church. That field is now the site of relatively new High School facilities... apparently Al's grave has been removed.

The "Lackey tree" stands just one mile west of Blanco, on Old Rte 66, aka River Road (marked Rte 1603 as it comes into Blanco), just west of a topped tree near the highway. The second fork of the oak, pointing toward the road, is where the rope ended the career of Al Lackey in a lynching party for the murder of six of his own family connection. At that time, the road was barely south of the trees, between them and the old rock fence.

Location: On land belonging to W. A. Walker in 1985. Is at the east corner of the land near the Baptist Church, under a large oak tree. There is a ring of rocks to mark the gravesite. Outside Blanco.

On Aug 24 1885, Albert Lackey went berserk and shot and killed six persons, members of his family and relatives. The Lackey killings were followed by a hanging of Albert Lackey by a mob outside the town of Blanco where he was being held in jail. The Lackey family lived near Hickory Creek in the north end of the county and are buried in the Sandy Cemetery.

Several sources say Al had been accused of sexually molesting his teenage niece and impregnating his own daughter.

Is Al your ancestor? Please don't go away!

ask our community of genealogists a question.
Sponsored Search by Ancestry.com
DNA Connections
It may be possible to confirm family relationships with Al by comparing test results with other carriers of his Y-chromosome or his mother's mitochondrial DNA. However, there are no known yDNA or mtDNA test-takers in his direct paternal or maternal line. It is likely that these autosomal DNA test-takers will share some percentage of DNA with Al: 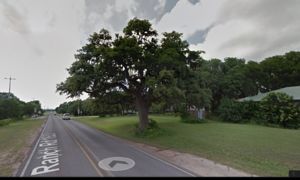