1880 Census AJ Lacy is shown as the head of household with his wife Molly along with his mother-in-law, Mary Ann Eaton (Butler) Wells and his 2 nieces Lula & Eva Scott. [4]

1900 Census [5] AJ Lacy is shown as head of household with his wife Mollie along with his children Wells, Iline, Julia, Cleveland, Kathrine, and Lucille.

06 Jan 1901 AJ Lacy was elected manager of a new camp of the Woodsmen of World. (see newspaper clipping)

A. J. Lacy, 71 years old, died suddenly in the home of his daughter, Mrs. Samuel Chatwin of 1506 Marshall street. The funeral will be held Wednesday afternoon at 3 oclock from the home on Marshall street and interment will be made in the cemetery at Keatchie. The Funeral services will be in charge of the Shreveport Lodge of the Woodmen of the World and will be conducted by the Roll Osborn and Sons Undertaking company. The deceased is survived by his wife, two sons, Wells & Cleveland, of Shreveport; three daughters, Mrs. Samuel Chatwin and Mrs. Edward Grafton, both of Shreveport, and Mrs. Zaunderer of Fresno, Cal. [9]

Is AJ your ancestor? Please don't go away!

ask our community of genealogists a question.
Sponsored Search by Ancestry.com
DNA Connections
It may be possible to confirm family relationships with AJ by comparing test results with other carriers of his Y-chromosome or his mother's mitochondrial DNA. However, there are no known yDNA or mtDNA test-takers in his direct paternal or maternal line. It is likely that these autosomal DNA test-takers will share some percentage (beta) of DNA with AJ: 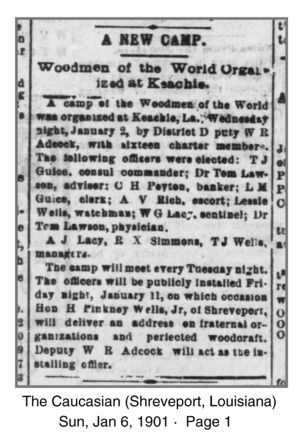 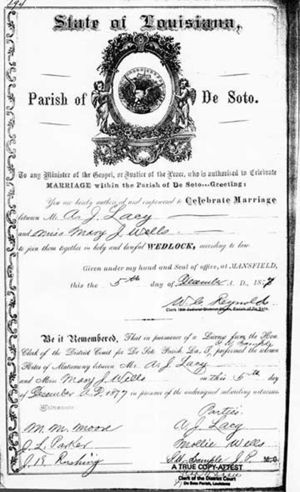