John "John of Chester, Earl of Lincoln, Constable of Chester" de Lacy formerly Lacy aka Lascy
Born about 1192 in England

"John de Lacy, the constable of Chester, was a member of one of the oldest, wealthiest and most important baronial families of twelfth- and thirteenth-century England, with territorial interests distributed widely across the counties of the north Midlands and north.

"John (c. 1192-1240) was the eldest son and heir of Roger de Lacy, constable of Chester (d. 1211) and his wife, Maud de Clere. He was a minor at the time of his father's death and did not enter into possession of his lands until September 1213. Like a number of the rebels, he was a young man at the time that he became involved in the revolt. Although a natural royalism is suggested by his decision to join John on his expedition to Poitou in 1214, he nurtured a sense of grievance against the king owing to the terms on which he was granted possession of his father's estates. The de Lacy inheritance was a highly valuable one, comprising more than a hundred knights' fees, together with the baronies of Pontefract (Yorks.), and Clitheroe, Penwortham, Widnes and Halton (Lancs.). John, when he permitted the young heir to enter, therefore exacted his price. He insisted that the latter offer a massive fine of 7000 marks repayable over three years, in the meantime handing over to a royal keeper his chief castles of Pontefract (Yorks.) and Castle Donington (Leics.), to be garrisoned by the king at Lacy's expense on pain of confiscation should the latter rebel.

"As late as the end of May 1215 Lacy was still assumed to be on the king's side. However, with the fall of London he threw in his lot with the rebels and was present at Runnymede and named to the Twenty Five. Thereafter he veered opportunistically between the rebel and royalist camps. On New Year's Day 1216 he submitted to the king, agreeing to terms which shed remarkable light on the latter's own attitude to the Charter imposed on him at Runnymede. Lacy was obliged not only to submit to the king personally but also to renounce the cause for which he had been fighting. In the words of the submission 'If I have sworn an oath to the king's enemies, then I will not hold to it, nor will I adhere in any way to the charter of liberties which the lord king has granted in common to the barons of England and which the lord pope has annulled'. Through the imposition of such terms, John was hoping to kill off the charter at birth. Although ostensibly entering into the terms of his own free will, Lacy was probably agreeing to a formula devised by the king's clerks. Precisely the same wording is found in the charter of submission of Gilbert FitzReinfrey, who likewise made his peace in January 1216.

"In May 1216 Lacy was still at the king’s side, but by the time of the latter's death at Newark in October he was in rebellion again. He was probably active on the rebels' behalf for much of 1217, but appears not to have been present at the baronial defeat at Lincoln. He submitted and was readmitted to fealty in August, a time when a good many rebels submitted to the new king. In the following month he was ordered to oversee the restoration of Carlisle Castle by the king of Scots. By now, however, his thoughts were now turning to the crusade, and in May 1218 he embarked for Damietta in Egypt with his overlord, Ranulph, earl of Chester. He did not return to England until August 1220. In 1225 he was witness to the definitive reissue of Magna Carta and in the following year he served as a king's justice in Lincolnshire and Lancashire. Following Ranulph's death in 1232 he was allowed to inherit one of the earl's titles, that of the earldom of Lincoln, as the son-in-law of the earl’s sister, Hawise.

"Lacy died on 22 July 1240 and was buried near his father in the choir of the Cistercian abbey of Stanlaw (Lancs.), his bones being moved to Whalley, when the monks transferred there in the 1290s. He left a widow, Margaret, daughter of Roger de Quincy (d. 1217), eldest son of Saer de Quincy, earl of Winchester (d. 1219), another of the Twenty Five. Margaret died in 1266 and was buried in the Hospitallers' church at Clerkenwell, London."

Richardson names only two of John de Lacy's three daughters and shows all of his children to be by his second wife, Margaret.[1] Another source, the Cheshire Visitation has Alice (Alicia) as his second wife, mother of Maud and Idonia, with Edmund the son of his first wife Margaret.[9][10]

The History of the county of Lancaster names Margaret as second wife, giving the same marriage date as Richardson (before 21 June 1221) and, like Richardson, naming her mother of Maud and Edmund (with Alice as his first wife, "by whom he appears to have had no issue").[11][1]

While Richardson notes a third daughter, whom the Cheshire Visitation names Idonia, wife of Roger de Camville, Lewis gives her a second marriage, into the Dutton family, apparently based on Pedigrees of Some of Charlemagne's Descendants and Wurts.[12][13] Several questionable Magna Carta lines of descent extend from this marriage of "Alice (Idonia)" and the "Crusader" Geoffrey de Dutton, who dies in 1248. However, Geoffrey married a different woman - Alice de Lacy, daughter of John de Lacy's grandfather, also a John, also a Crusader, like Geoffrey, also a Constable of Chester, and Baron of Halton, like his grandson.

The WikiTree profiles for John's children are attached as children of Margaret, following Magna Carta Project policy of following Richardson unless there is clear primary proof to the contrary. While information from a Visitation can sometimes meet this criteria, information about a family in the 1200s centuries later (i.e., The Visitation of Cheshire in the Year 1580 [emphasis added]) does not. Still, the profile for Idonia is attached to Roger de Camville (but not Geoffrey de Dutton). See Idonia's profile for additional information.

Whalley Abbey is also known as the Parish Church of St. Mary and All Saints, in Whalley, Clitheroe, Lancashire. The Abbey was partly destroyed in 1537 during the Dissolution of the Monasteries. Presently some fine ruins and other buildings. The intact parish church of St. Mary & All Saints, Whalley, antedates the founding of the Abbey. A premier visitor attraction.

Alton Rogers received an e-mail dated 29 February 2008 from Sharon at Whalley Abbey Reception noting that the Lacy family were major land owners in the area surrounding Whalley Abbey in Lancashire and other areas in Lancashire and Yorkshire. The family very generously donated the land for the Abbey to build upon and there is a de Lacy family tomb presently within its grounds.

Thank you to everyone who contributed to this profile. Click the Changes tab to see edits to this profile; from that list, click WikiTree IDs other than Lacy-284 to see changes to those profiles prior to being merged.

See Lacy-284 Descendants for profiles of his descendants that have been improved and categorized by the Magna Carta project and are in a project-approved trail to a Gateway Ancestor. See this index for links to other surety barons and category pages for their descendants. See the project's Base Camp for more information about Magna Carta trails. 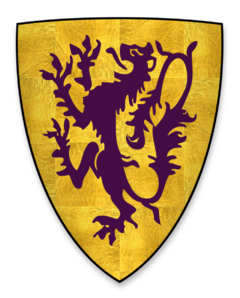 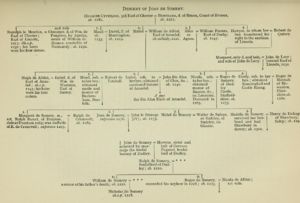 I'm just starting on a re-review of this profile.

Liz (Noland) Shifflett
Hi! In the notes for "Questionable Daughter Idonia" is a statement that seems to say daughter Maud is by Alice, not Margaret, based on the cited Visitation (of 1580):

"...Richardson has stated that there was no issue from first wife, Alice, but this Visitation pedigree has also given a verified daughter, Maud/Matilda, to Alice."

I'm working on a re-review of Maud's profile. It was my understanding that a pedigree given in a Visitation lost credibility the farther apart in time they were (e.g., Maud, born about 1220, is 350 years removed from the 1580 Visitation).

Am I misreading that statement or is the mother of Maud disputed?

posted May 07, 2018 by Liz (Noland) Shifflett
April (Dellinger) Dauenhauer
Well, Chase - you have been busy. It is a challenge to keep up with you :)

J. (Pearson) Salsbery
This says he was the 7th Earl of Lincoln.