He emigrated to America and was living in Schenectady, New York,[1] in February 1690, during King William's War, when a French and Indian force attacked the fortified settlement, destroying the fort and town. John was among the survivors of the attack who was taken captive and marched to Nouvelle-France (French territory in Canada).

He renounced the Protestant faith in 1696 in Montreal. His abjuration is on the Montreal records. In English translation, it reads:[2]

"On Monday, 19 March 1696, Jean Lahe born in 1670 at Tollo in Ireland of the marriage of Thomas Lahé, Catholic, and of Catharine Williams, Protestant, and baptized in his country in the Catholic religion & later having professed the Puritan religion until last year, when he was taken in the month of July among the Flemish of Corlar and living now in the service of M. le ber, Merchant, solemnly made abjuration of heresy into the hands of Mre Henri Antoine Meriel, Priest of the Seminary of Vile Marie, authorized to receive it by M. François Dolie priest, Grand Vicaire etc. And this in the presence of M. Yves Priat, priest of said Seminary of Ville Marie and of several others."

He sign his name as Jean Lahaye on the baptism of his daughter Sylvie.

Marriage Jean Lehait, son of Thomas Lehait and of Catherine Guillot, from the city of Tollon in Ireland, married Marie Madeleine Souard, daughter of Jean Souard and Anne Ebal, of the city of Selam, on 9 September 1697 in Notre-Dame de Québec.[3]

In May, 1710, Jean Laha, Irishman, and his wife "Marie Swarton, Englishwoman, ... established in Montreal and having three children," became French citizens.[2]

In 1714, Jean, who had been living in Côte de la Chine in Montreal for twenty-two years, was arrested along with an Englishman named Jean Joublin for counterfeiting money. The Report says that because Jean Leahy has rendered the Queen and colony great service, criminal proceedings had been suspended until further notice, and out of consideration for the ambassadors of Queen Anne of England herself, who had demanded these two prisoners as being of their nation, had promised to beg Her Majesty to order their release without trial. The long imprisonment that they have already suffered as being prisoners of war, and which they must still endure until orders from the Queen are received, is a severe punishment. The record goes on to say that the counterfeit bills were only made-and had never been in circulation. They are besides so badly made that no one could be deceived. [2]

ask our community of genealogists a question.
Sponsored Search by Ancestry.com
DNA Connections
It may be possible to confirm family relationships with Jean by comparing test results with other carriers of his Y-chromosome or his mother's mitochondrial DNA. However, there are no known yDNA or mtDNA test-takers in his direct paternal or maternal line. It is likely that these autosomal DNA test-takers will share some percentage of DNA with Jean: 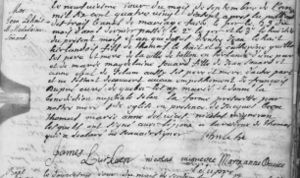 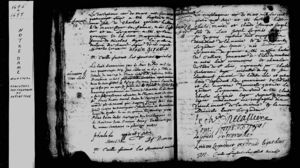 signatures of father, godfather and godmother on Sylvie's baptism