Shyama Charan Lahiri was born on 30 September 1828 into a Brahmin family in Ghurni village, now a part of Krishnanagar town in Nadia district of Bengal Province. He was the youngest son of Muktakashi Devi, 2nd wife of Gaur Mohan Lahiri. His mother died when he was a child and there is very little known about her, except that she was a devotee of Lord Shiva, "King of Yogis". At the age of three or four, he was often seen sitting in meditation, with his body buried in the sand up to his neck. In 1833, when Shyama was five, the family's ancestral home was lost in a flood, so the family moved to Varanasi (Banaras), where he would spend most of his life (Yogananda, 1946, Ch.35, 'The Christlike Life of Lahiri Mahasaya'). There his father erected a temple to Lord Shiva and ran his household with regular observance of ceremonial worship, acts of charity and scriptural study.

As a child, he studied Urdu and Hindi, gradually moving on to Bengali, Sanskrit, Persian, French and English at the Government Sanskrit College, along with study of the Vedas[1]. Reciting the Vedas, bathing in the Ganges, and worship were part of his daily routine[2].

"Shyama Charan was a kind, gentle and courageous youth, beloved by all his companions. With a well-proportioned, healthy, and powerful body, he excelled in swimming and in many feats of manual skills" (Yogananda, 1946, p.342).

In 1846, he married Srimati Kashi Moni, who became his disciple and was affectionately called Guru Ma. They had two saintly sons, Tincouri and Ducouri, and three daughters, Harimoti, Harikamini and Harimohini. Paramahansa Yogananda had been baptised by Lahiri Mahasaya, who was also his parents Guru, and sometime much later when visiting Banaras he had the opportunity to meet with LM's wife whom he referred to as an aged 'venerable lady' and had an interview with her giving him some amazing insights into her life with her husband (Yogananda, 1946, Ch.31, 'An interview with the sacred Mother').

In 1851, aged 23, he became an office worker as an Accountant in the Military Engineering Department of the British India Government, where he was to receive many promotions and transfers to different places. When his father died (no date could be found) he bought a house for the entire family in the Garudeswar Mohulla suburb of Banara, which is where Yogananda found LM's mother.

In 1861, aged 33, he met with the great Guru Mahavatar Babaji[3] near Rhaniket in Uttarakhand Province in the Himalayas, which is near Naini Tal, one of the offices he had been posted to in his work. There he was initiated[4] by Babaji in Kriya Yoga[5]. Yogananda was to write that - "The timeless bond of guru and disciple that existed between John [the Baptist] and Jesus was present also for Babaji and Lahiri Mahasaya" (Yogananda, 1946, Ch.35, p.373). Babaji 'released' Lahiri Mahasaya to begin his world mission, to spread Kriya Yoga, saying "My son, I shall come whenever you need me". It is claimed that Babaji was last seen in October 1999 at a meeting with the author M. Govindan[6]. See rather Yogananda, 1946, Ch.33, 'Babaji, Yogi-Christ of Modern India', who clearly states that there are no reliable birth dates for any of the early Avatars, such as Babaji. "Great prophets like Christ and Krishna come to earth for a specific and spectacular purpose; they depart as soon as it is accomplished. Other avatars , like Babaji, undertake work that is more with the slow evolutionary progress of man during the centuries than with any one outstanding historical event" (op.cit., p.347).

Lahiri Mahasaya was at the bodily age that corresponds with those of the majority of Bucke's, largely western mystics, 30 to 40 yrs range, who attained Cosmic Consciousness, and he had many of the other characteristics listed by Bucke[7], when he was initiated but his age at the final stage of Self-realisation is not clear.

Lahiri returned to Banaras and started to add the gift of giving Kriya Yogi initiation to those of every faith or no faith, but in accordance with their own faith, through meditation, to his role of family supporter through his accountancy work, as well as other interests, all readily accomplished in Cosmic Consciousness. Hundreds came to him from all parts of India.

After 35 years service in the same government department he was retired on a pension in 1886. In the same year, he gave permission to Rev. Yogacharya Shri Panchanan Bhattacharya (Chief Disciple of Rev. Yogiraj Shri Shyamacharan Lahiri ) to found The Aryya Mission Institution in Kolkata, India. He was the first person Rev. Yogiraj Shyamacharan Lahiri permitted to initiate others into Kriya Yoga[8].

His 'World Mission' would be taken up by his spiritual Kriya Yoga family of descendants[9], starting with Paramahansa Yogananda in August 1920 sailing to the USA, followed by Paramahamsa Hariharananda to Switzerland in 1974, and Triloki Dash to Austria, Holland and Germany in 1994 before returning to India to be initiated by his guru Hariharananda on 25 April 1995, to become Swami Prajnanananda Giri, going back to Austria the next day. He has become the head of the Kriya Yoga International Organisation that was founded by Paramahamsa Hariharananda, and now runs programmes in North America, South America, Europe, India, Asia, Australia and New Zealand[10].

The expansion of Kriya Yoga in India was carried on by Lahiri Mahasaya and "was spread by his worthy disciple Swami Sri Yukteswar Giri or Shriyukteshwarji"[11]. He also requested "his dear disciple Sanyal Mahasaya ... to spread the message of Kriya Yoga"[12]. Swami Satyananda Giri, who initiated Hariharananda, was a disciple of Shriyukteshwarji, and "spent the later part of his life from 1944 to 1971 transforming the lives of millions of people"[13].

"Lahiri Mahasaya's divine play of miracles was without end. Though he had a physical body, he was also formless. Materializing in more than one place at the same time, he accomplished his work. Kind-hearted and generous, he miraculously saved the lives of many disciples and drew true seekers to him like a sweet and fragrant flower bewitches bees"[14].

"In 1895 he began gathering his disciples, letting some of them know that he would soon be leaving the body. Moments before his passing, he said simply, "I am going home. Be comforted; I shall rise again." He then turned his body around three times, faced north, and consciously left his body, entering mahasamadhi. Lahiri Mahasaya died on 26 September 1895, four days before turning 67. He was cremated according to Hindu Brahmin rites at Manikarnika Ghat in Varanasi" (Wikipedia).

Is Lahiri your ancestor? Please don't go away!

ask our community of genealogists a question.
Sponsored Search by Ancestry.com
DNA
No known carriers of Lahiri's ancestors' DNA have taken a DNA test. 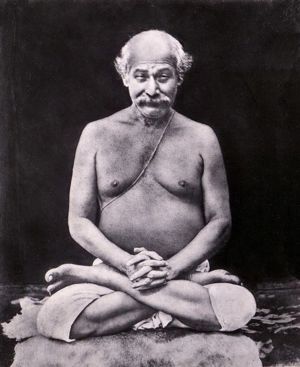