This profile won Profile of the Week the Second Week of November 2014.

Chief Rain in the Face was born of the Hunkpapa band of Lakota in the Dakota Territory near the fork of the Cheyenne River in 1835. He was named this due to being in a fight with an older boy. This resulted in his face having blood spatters on it from the blood of the other boy as if rain had hit him.[1] Later this story was enhanced when he was in a battle during a rainstorm resulting in the red and black warpaint running down his face, giving an appearance of being streaked.

He was related to the great Chief Inkpaduta through his mother who was a Dakota, called Smoke Woman.[2]Once toward the end of his life, he told that neither his father nor grandfather were chiefs, but hunters.[3][4] In other words, he worked hard for his chieftainship.[5][6]

Battles with the whites were numerous. One was the Fetterman Fight, when Capt. Fetterman was protecting a detail that was to supply the wood for Fort Kearny and the Captain had orders not to pursue or attack Indians.[7] Crazy Horse was teamed up with Chief Rain in the Face. [8] Crazy Horse made a small attack against the wood detail, luring the soldiers out. Sure enough, Captain Fetterman pursued immediately, being lured into the trap. Several hundred Indians pounced upon the soldiers, killing all of the soldiers.[9] [10] 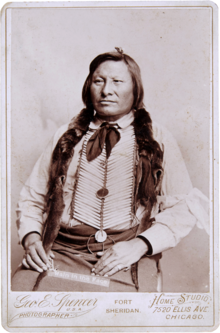 He killed several people, such as a veterinarian in 1873, an army private and a civilian. He was arrested by General George Custer's brother, Capt. Thomas Custer, then escaped or was released. [11] Lakota teamed up with Arapaho bands in the Battle of the Rosebud, destroying much of a General George Crook's army.

Later in 1876, the Chief Rain in the Face Lakota was with Chief Sitting Bull and his group, camping by the Little Bighorn River. Suddenly, they were attacked by General Custer who was supposed to be protecting railroad surveyors near the Little Big Horn river. [12] The Lakota called this Grease Grass battle but American History calls this the Battle of Little Big Horn River in which Rain in the Face is reported to have killed General Custer and his forces wiped out a lot of the U.S. 7th Cavalry. [13][14]

General George Custer was fighting in one area, and his brother, Capt. Thomas Custer fought in another area another, with two Medals of Honor.[15] Publicity after this battle varied from General George Custer's death to accusing the Chief of cutting the heart out of the general's brother, Capt. Thomas Custer. Others said the body of Thomas was badly cut up, but the heart was intact.

The poet, Henry Wadsworth Longfellow wrote a poem about this, entitled "The Revenge of Rain-in-the-Face".[17] 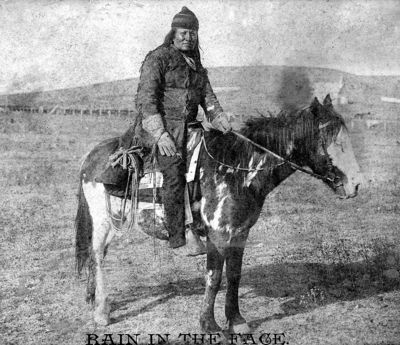 Chief Rain in the Face and others escaped to Canada, spending time there awhile. He eventually led the group back to surrender in 1880. He lived the rest of his years on Standing Rock Reservation. [18][19]

Rain in the Face died September 14, 1905, and was buried near Aberdeen, Brown County, South Dakota, USA. He said his spirit was gone when he put his weapons down. (paraphrased). [20] FindaGrave gives the date of burial as:

Sponsored Search by Ancestry.com
DNA
No known carriers of Rain in the Face's ancestors' DNA have taken a DNA test. 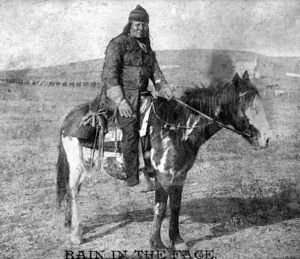 Rain in the Face Lakota Image 2

Rain in the Face Lakota Image 3

Jillaine Smith
Can we find sources that support the identification of his wives and children, please?
posted May 02, 2020 by Jillaine Smith

Mary Richardson
Jillaine, I found two sources, but not top-notch. One source on Rain in the Face's father is a dead link. The two I added to Rain in the Face, do not confirm mother's actual name, but her common name, Smoky Woman. Looks like a merge occurred so no help there.
posted May 03, 2020 by Mary Richardson

Jillaine Smith
Mary, this is a lovely profile. Nice work. I see it was project-protected many years ago. To retain project protection now requires co-management by a project (in this case it could be the Native American project). If you think it needs protection moving forward, please add wikitree-native-americans-project@googlegroups.com as an additional profile manager and switch the NA sticker to a box. Feel free to delete this comment once you've decided. I think, as a project coordinator, you have the ability to remove project protection if it's no longer needed. Thank you, Mary!
posted Oct 22, 2018 by Jillaine Smith

Paula J
I felt like one comment was not enough! Congratulations on this wonderful profile, Mary!! You really did an excellent job in every way!
posted Nov 21, 2014 by Paula J

Eric Daly
Font issue can be the settings of the browser or an out of date browser. i can provide screen shots of how the Manager intends it to look and it looks fantastic
posted Nov 14, 2014 by Eric Daly

Jillaine Smith
Congratulations; it looks like a fine profile. Unfortunately, I cannot read the text with the font being used.
posted Nov 14, 2014 by Jillaine Smith

Paula J
Yay Mary!! This excellent profile is only one example if the great work you have been doing on the American Indian project. Thanks for your dedication and hard work!!
posted Nov 13, 2014 by Paula J