Theodorus Petrus Antonius was a teacher.

Theodorus Petrus Antonius Lambooij, born 18 February 1901[1] in Dronrijp, son of Hermanus Dominicus Lambooij and Maria Hendrika Ahsmann. He passed away 10 May 1995 in Leeuwarden and was cremated in Goutum.

Theo Lambooij was a school teacher first in Lichtenvoorde and from 1919 at the Julianaschool in Leeuwarden. He is known as an organist (church of the Dominicus parish in Leeuwarden) but especially as a writer of music reviews and writer of books on (Frisian) music. He also wrote songs. For his social activities he was honored in 1982 as a Knight in the Order of Orange-Nassau[3]. He was also the bearer of the golden cross of honor of the papal order Pro Ecclessia et Pontifice

Is Theodorus Petrus Antonius your ancestor? Please don't go away!

ask our community of genealogists a question.
Sponsored Search by Ancestry.com
DNA
No known carriers of Theodorus Petrus Antonius's ancestors' DNA have taken a DNA test.

Images: 2
Headstone at the Roman Catholic Cemetery in Leeuwarden 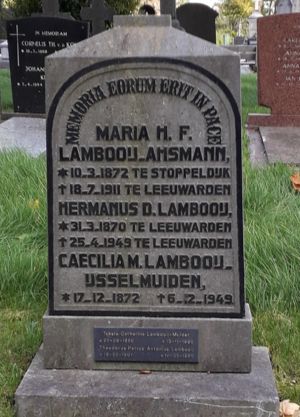