Gerrit Lammertsen was a resident of the vicinity of Kingston, New York, circa 1690 and later. He is the ancestor of the Teerpenning family (including variant spellings such as Terpenning, Terpening, and Tarpenning) in America.

There is no record in New Netherland for the baptism of Gerrit Lambertse, but Gerrit has been assumed to have been born in New Netherland. He has been assumed to be an undocumented son of Lambert Huybertszen, whose confirmed children took the family name of Brink. Presumably this assumption was based on Gerrit's patronymic, plus the information that members of the Brink family witnessed baptisms of two of Gerrit's children. (Lysbeth Lambertse Brink and her husband Ariaen Gerritsen witnessed the baptism of daughter Claertje, and Huybert Lambertsen Brink and his wife Hendrickje witnessed the baptism of Gerrit's son Dirrick.) Susan Schock found that the earliest document to identify Gerrit as a member of the family of Lambert Huybertsen was the 1906 compilation of Ulster County, N.Y. Probate Records, by Gustave Anjou. Anjou listed Gerrit among the children of Lambert Huybertsen in a footnote to the transcript of the will of Lambert Huybertsen, although the will did not name Gerrit among the decedent's children. Schock noted that a 1913 genealogy of "southern New York" did not include Gerrit among the children of Lambert Huyberten, but it appeared in many subsequent genealogies of the Brink family, in spite of observed inconsistencies in the evidence.[1] For example, in A Brink Book (1997), Powell treats Gerret as a child of Lambert and Hendrickje, but notes that Gerret is not mentioned in the will of Lambert Huijbertsen.[2]

Schock reviewed several bits of evidence that are inconsistent with the identification of Gerrit as a son of Lambert Huybertsen. These are summarized below:[1]

Schock identified some other versions of the origins of the Teerpenning family found in published sources. She described these as having "hindered and confused researchers instead of providing any understanding of the ... family's roots." These are summarized below:[1]

Gerret Lammertsen is geboren in Utrecht in 1645

Susan Schock suggested that Gerrit might have been a young man named Gerrit Lambertsen, of Bunschoten, Utrecht, the Netherlands, age 18, who arrived in New Netherland in 1663, aboard De Bontekoe, to work for Jan Thyse on his farm in Rensselaerswyck.[1] Gerrit Lamberts is listed in Ship Passenger Lists New York and New Jersey 1600 to 1825 as having traveled on the sailing of the De Bonte Koe that left Amsterdam on 16 April 1663 and arrived in New Amsterdam between 11 May and 17 August of that year. His passage was paid by Jan Thyse of Rensselaerswyck, for whom he was to work as a farm laborer.[4][5]

Schock reported that a record for the baptism on 12 January 1645 of Gerrit, son of Lambert Thomassen and an unidentified mother, had been found in Bunschoten in 2002. She said that the father was reported to be from Spakenburg, a smaller village near Bunschoten. One other record for the father Lambert Thomassen was also found: the baptism on 29 July 1632 of a son named Aert, whose mother was named Ryckgen.[1] These records have been located online in the Dutch Open Archives website at https://www.openarch.nl. The record for Aert is indexed, with an image.[6] A record image (apparently not indexed) for the baptism on 12 January 1645 of Gerrit, child of Lambert Thomasse was also found.[7] This baptism date is consistent with this man's reported age of 18 years in 1663.

Albany court minutes show that Gerrit Lambertse was employed by Jan Tyse,[8] presumably under an indenture agreement that bound him for a period of several years. The court record indicates that, in addition to his farming work, he undertook at least one trip by horseback into Mohawk country, possibly to trade with the Indians on behalf of his employer. The Jan Thyse for whom Gerrit worked as a young man is very likely to be Jan Tyssen Goes. He is the only man named Jan Tyssen (or variant forms of that patronymic) that Pearson identified as being documented in early Albany records,[9] and the mention of his wife Styntje in court records is consistent with the indication that Jan Tyse Goes married a wife of this name in about 1665.

Lawsuit Over Compensation for Employment and Journey Expenses

Schock identified this man as the Gerrit Lambertse who sued Jan Tyse, his former employer, in the Albany Court in 1682.[1] The Albany Court Minutes recorded the court action: [8]

Schock suggested that the factual situation of this lawsuit is the origin of the family name "Teerpenning." The word "teerpenning" appears in Dutch dictionaries found oniine as a synonym for "viaticum" (meaning "supplies or money for a long trip") [1] or "reisgeld"[10] ("travel money") and a definition in archaic Dutch dictionaries as "a piece of money given to a poor traveller."[11] Gerrit's success in winning the money due him for his travels could have earned him the nickname "Teerpenning," which nickname served at first to distinguish him from other men of the same name, and later became his family's surname.[1]

After the court case in 1682, the next identified evidence for this man is his appearance in the Kingston, New York, area around 1690, the estimated date for his marriage to Antje Hoogland. It is likely that he had married some time after leaving the employment of Jan Tyse, and was widowed before his marriage to Antje.

Schock speculated that Gerrit and Antje might have had familial geographic affinities in the Netherlands, noting that Antje's father Dirck Hooghlandt was born in Maerseveen (near Hooghlandt), about 4 miles from Bunschoten.[1]

There are five identified children of Gerrit Lambertsen and Antje Hooghlant:

Schock observed that four of these five children appear to have been named for Antje's family members. During her first marriage, Antje had already had a daughter and son named for her parents (Annetie, baptized in 1686, and Derick, baptized in 1689). Jan, the first son of Gerrit and Antje, was given the name of Antje's paternal grandfather and her brother. The name Breechje may have come from Antje's aunt of that name, the name Teunis may have recognized Antje's step-grandfather Theunis Bogaert ("the only grandfather that Antje had ever known"), and the youngest child Dirrick was likely named for his maternal grandfather Dirck Hooglant after the child of that name from Antje's first marriage had died young. Only the name Claertje is not identifiable as the name of a family member. The presence of members of the family of Lambert Huybertse as witnesses at the baptisms of Claertje and Dirrick also can be explained by relationships by marriage to Antje's family. Schock speculated that Gerrit might have been orphaned at an early age (possibly due to the Black Plague, consistent with Terpening family lore) and might not have known his own family well enough to want to name children for them.[1]

The last known record of Gerrit Lambertsen is an entry on the New Paltz taxpayer list of 1712, so he died some time after that. [1]

LNAB: Gerrit's origins are uncertain. Lammertsen, Gerrit's patronymic, is the "surname" that first appears in church records for him. Quackenbush-118 21:12, 17 July 2017 (EDT)

Sponsored Search by Ancestry.com
DNA Connections
It may be possible to confirm family relationships with Gerret by comparing test results with other carriers of his Y-chromosome or his mother's mitochondrial DNA. However, there are no known yDNA or mtDNA test-takers in his direct paternal or maternal line. It is likely that these autosomal DNA test-takers will share DNA with Gerret: 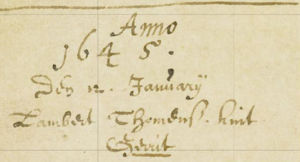 Ellen Smith
In view of the existence of a baptism record, apparently for this man, that calls his father Lambert and the indication that he was called Gerrit Lamberts when he arrived in New Netherland, I think his LNAB should be Lamberts. Any objections or other comments?
posted Feb 04, 2019 by Ellen Smith

Ellen Smith
Susan B. Schock's article "Identifying Gerrit Lambertsen: Progenitor of the Terpening Family of Ulster County NY" convincingly demonstrates that this man was NOT a son of Lambert Huybertsen and Huybertje Cornelis, so I am disconnecting then as his parents. I desperately need to get around to documenting the situation on this profile.
posted Jan 28, 2019 by Ellen Smith
Susan McNamee
This website gives some reasoning as to why the children of Gerritt Terpenning Lambertsen went with Terpenning.

I don't have access to The Freer Family: The Descendants of Hugo Freer, Patentee of New Paltz which probably contains all the answer as it isn't online.

It also looks like the parents for Brejen would also need to be consolidated.

Hopefully this is enough information to get the duplicates resolved.

posted Jul 17, 2017 by Susan McNamee
Susan McNamee
I was working on DB Error 408 Multiple marriages on same day and these profiles came up. It looks like the following three profiles all belong to the same person - two of these are set as unmerged matches.

The New York Genealogical and Biographical Record, Volumes 33-34 on page 15 lists the following:

Hugo Freer, Jr (Hugo,Hugo) was bap at Paltz, 1691, Oct 17. Witnessess: Abraham Freer and Maria Freer; m (banns recorded) at Kingston 1715, April 24, Bregjen Teerpening, who was b at Minisink and residing at Rosendale.

Ellen Smith
Terpennig-1 and Lambertse-4 appear to represent the same person because: Same wife, other details are similar (and and both profiles' birth and death dates appear to be guesstimates). The family of this Gerret Lambertse came to be called Teerpenning, and Terpennig is a different way of rendering that name.

I believe that Lambertse is a good LNAB for this man.

Ellen Smith
His baptism and marriage are not recorded in the Kingston church records. The four baptisms of children listed on this page all were recorded with a patronym for Gerrit; therefore, Lambertse-4 looks like an appropriate LNAB for him.
posted Aug 09, 2016 by Ellen Smith
Dan Sparkman
"Sprague-database...." gives a length of life for Jan Terpening of 108 years. I am sceptical of this, to say the least.
posted Jun 12, 2015 by Dan Sparkman

Robin Lee
Brad, Since you are the profile manager of this profile and the duplicate, you can make the decision on the last name at birth (LNAB)
posted Dec 05, 2013 by Robin Lee

Robin Lee
Brad, Since you are the profile manager of this profile and the duplicate, you can make the decision on the last name at birth (LNAB)
posted Dec 05, 2013 by Robin Lee