Jane Lampton was deemed the handsomest and the wittiest of girls, as well as the best dancer, in all Kentucky. She married John Clemens in 1823, in part to spite a former suitor. Jane also had a great gift of storytelling. A skill her son, Samuel, learned from her.

Jane and her husband had seven children, but only four (Orion, Pamela, Samuel, and Henry) survived at the time of her husband's, John Marshall Clemens’s, death in 1847. Once he died, Jane had to raise the children on her own. She left Hannibal, Missouri, and between 1853 and 1870 lived in Muscatine, and possibly Keokuk, Iowa, and in St. Louis, Missouri, initially as part of her son's, Orion Clemens’s, household and then with her daughter Pamela Moffett. After Samuel married and settled in Buffalo, New York, in 1870, Jane set up house in nearby Fredonia, with the widowed Pamela. In 1882 she moved to Keokuk, Iowa, where she lived with Orion for the rest of her life. She was buried in Hannibal’s Mount Olivet Cemetery, alongside her husband and her son Henry. In an autobiographical sketch written in 1897 or 1898, Samuel commented that his mother had “come handy to me several times in my books, where she figures as Tom Sawyer’s Aunt Polly.’” Her Hannibal pastor called her “a woman of the sunniest temperament, lively, affable, a general favorite.” Samuel wrote about her at length in “Jane Lampton Clemens” (1890).

There is an interesting relationship with John Adams Quarles and the family of Mark Twain. John A. Quarles married Patsy Lampton, a sister of Jane Lampton who was married to John Marshall Clemens of Jackson Co. Mr. Clemens is described in John Oscar Blackney's book, The Quarles and Some Collaterals, as "a good enough sort of fellow, a dreamer of dreams that never came true, and a financial and business failure." John and Patsy Quarles moved to Florida, Missouri, about 1830. His record as a farmer and merchant marked him a notable man, full of humor, thoroughly reliable and resourceful. He was elected county judge of Monroe Co., Missouri. The Clemens family joined the Quarles family in Missouri in 1832, and thus Florida, Missouri, became the birthplace of Samuel Clemens (Mark Twain). Samuel Clemens spent his boyhood summers enjoying the hospitality of his Uncle John's family. He hunted, fished, and engaged in all the sports of that era in a new country. Many legends survive of John A. Quarles' whimsical humor, and some of his stories have been immortalized in the literature of his distinguished nephew. This association, together with the slaves on the Quarles plantation, provided the seed that was to produce ideas for some of Mark Twain's stories. This connection is probably why Samuel Clemens wrote some of his early works under the pen name "Thomas Jefferson Snodgrass."

Florida was destined to remain a small village attending to the commerce needs of area farmers. The Clemens family, seeking better opportunities, left Florida for Hannibal, Missouri, when young Samuel was around five years old. He would continue to visit Florida for extended summer vacations at his uncle John Quarles' farm. Such summer memories and social interactions with Quarles house servants formed many of the sketches and perspectives that Clemens placed in his novels. The Quarles farmhouse remains as an active archeological project available to the public near Florida.

ask our community of genealogists a question.
Sponsored Search by Ancestry.com
DNA
No known carriers of Jane's DNA have taken a DNA test. 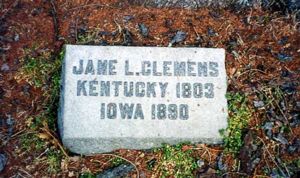 Cheryl (Stone) Caudill
James Lampton was the father of Jane Lampton, who married John Marshall Clemens, of Lexington, Ky., and became the mother of Samuel Langhorne Clemens, who won a world wide and lasting fame under the pen name of "Mark Twain." Jane Lampton was

born in Winchester in a brick house on the corner of Main and Hickman streets (then called "Highland" street). This house is still standing, and used to be known as "the Trowbridge place." http://genealogytrails.com/ken/clark/1810census2.html CLARK COUNTY, KENTUCKY, IN THE CENSUS OF 1810.