Burton Stephen "Burt" Lancaster (November 2, 1913 – October 20, 1994) was an American film actor noted for his athletic physique, blue eyes, and distinctive smile (which he called "the Grin"). After initially building his career in "tough guy" roles, Lancaster abandoned his all-American image in the late 1950s in favor of more complex and challenging roles, and came to be regarded as one of the best motion picture actors in history.

Lancaster was nominated four times for Academy Awards and won once for his work in Elmer Gantry in 1960. He also won a Golden Globe for that performance and BAFTA Awards for The Birdman of Alcatraz (1962) and Atlantic City (1980). His production company, Hecht-Hill-Lancaster, was the most successful and innovative star-driven independent production company in Hollywood in the 1950s, making movies such as Marty (1955), Trapeze (1956), Sweet Smell of Success (1957), and Separate Tables (1958).

In 1999, the American Film Institute named Lancaster 19th among the greatest male stars of all time. Burt Lancaster has a star on the Hollywood Walk of Fame at 6801 Hollywood Boulevard.

Burt Lancaster was born in Manhattan, New York City, at his parents' home at 209 East 106th Street, between Second and Third Avenues, today the site of Benjamin Franklin Plaza. Lancaster was the son of Elizabeth (née Roberts) and James Henry Lancaster, who was a postman. Both of his parents were Protestants of working-class origin.

Burt Lancaster grew up in East Harlem and spent much of his time on the streets, where he developed great interest and skill in gymnastics while attending DeWitt Clinton High School, where he was a basketball star. Before he graduated from DeWitt Clinton, his mother died of a cerebral hemorrhage.

Burt Lancaster was accepted into New York University with an athletic scholarship, but subsequently dropped out.

At the age of 19, Lancaster met Nick Cravat, with whom he continued to work throughout his life. Together they learned to act in local theatre productions and circus arts at Union Settlement, one of the city's oldest settlement houses. They formed the acrobat duo Lang and Cravat in the 1930s and soon joined the Kay Brothers circus.

However, in 1939, an injury forced Lancaster to give up the profession.

In World War II, Burt Lancaster joined the United States Army and performed with the Army's Twenty-First Special Services Division, for the USO with General Mark Clark's Fifth Army in Italy from 1943–1945.

After service he auditioned for a Broadway play, and was offered a role in Harry Brown's A Sound of Hunting, which ran three weeks, and drew the attention of a Hollywood agent, Harold Hecht, and through him to Hal Wallis, who cast Lancaster in his breakthrough film role in The Killers (1946).

When the picture that made Burt a star, The Killers, was released in August, 1946 Burt Lancaster went from unknown obscurity to instant stardom.

Burt began a brief but torrid affair with Marlene Dietrich.

Meanwhile, back in New York City Norma Anderson was having a baby.

Burt had learned she was pregnant just as he started the film for Hellinger. He was trying to get up enough money so Norma could have an abortion but that was not an option for Norma, whose religion forbid it. Baby James was born on June 30, 1946. The little one came into the world with a malformed foot and the need for surgery. On December 28th, 1946 Burt and Norma were married quietly in Yuma, Arizona. The studio announced the nuptials describing the bride as a “young war widow with a small son”.

All five of his children were with Norma Anderson:

Burt claimed he was romantically involved with Deborah Kerr during the filming of From Here to Eternity in 1953. However, Kerr stated that while there was a spark of attraction, nothing ever happened.

He did have an affair with Joan Blondell. In her 1980 autobiography, Shelley Winters claimed to have had a long affair with him.

Burt's divorce from his second wife Norma became final on June 27, 1969, Norma having finally filed in Santa Monica, charging her husband with extreme cruelty. She was awarded custody of the three minor children, and they divided the community property, valued at least $2 million.

During the 1970s Burt was then seriously dating and sometimes living with girlfriend Jackie Bone. She was a divorcee, and Burt lived with Jackie Bone in a rented beach house in Malibu.

When Jackie later rediscovered the Christian faith she had been raised in as a child, Lancaster felt he couldn't share this with her, and the couple split over the issue.

As Burt Lancaster grew older, he became increasingly plagued by atherosclerosis, barely surviving a routine gall bladder operation in January 1980. Following two minor heart attacks, he had to undergo an emergency quadruple coronary bypass in 1983, after which he was extremely weak.

In 1985 Burt Lancaster met his next and final young wife, Susie Martin, while she was working as an extra on a movie set. The couple then began a five year dating relationship. Susie was enmeshed in a slow divorce and Lancaster was reluctant to enter into another marriage arrangement that had not worked for him in the past. There may have been, too, a reluctance to marry while his ex-wife Norma was still alive.

An elderly Norma had returned to her Catholic faith and considered herself, according to the family friends who kept in touch with her, still married to Lancaster. Burt also knew that a monogamous relationship was important to Susie. There would be no more indulging for Burt in outside liaisons.

Burt's ex-wife Norma died in 1988. Four months after the airing of Voyage of Terror, Burt surprised many in Hollywood by getting married, Susie's divorce having become final on January 5, 1989. The civil ceremony, held September 10, 1990, was simple and restricted to family members. The following day, the newlyweds embarked for Charleston, South Carolina, and the final role of Lancaster's career (Separate but Equal).

Burt's acting career finally ended after he suffered a stroke on November 30, 1990, which left him partly paralyzed and largely unable to speak. He had filmed The Phantom of the Opera tv miniseries in 1990 for NBC, directed by Tony Richardson. It starred Charles Dance and Teri Polo. It is adapted from Arthur Kopit's book for his unproduced stage musical Phantom, which is based loosely on Gaston Leroux's novel.

Burt Lancaster died with Susie by his side in his Century City apartment in Los Angeles from a third heart attack at 4:50 am on October 20, 1994 at the age of 80.

Upon his death, as he requested, he had no memorial or funeral service. Lancaster was cremated and his ashes were buried under a large oak tree in Westwood Memorial Park located in Westwood Village, Los Angeles County, California. A small, square ground plaque inscribed only with "BURT LANCASTER 1913–1994" marks his final resting place.

Is Burton your ancestor? Please don't go away!

ask our community of genealogists a question.
Sponsored Search by Ancestry.com
DNA
No known carriers of Burton's DNA have taken a DNA test. 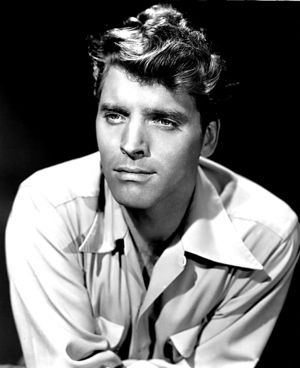