Father of Edward (Lancaster) of Lancaster
Died about May 1471 in Tower of London, London, England

Henry VI (Lancaster) of England is a member of the House of Lancaster.

Henry had been given shelter by Sir Richard Tempest, after the Battle of Hexham.[4] In July of 1465, his place of hiding was eventually disclosed by William Cantelowe, an Abingdon monk. Richard's brother, John, who was oblivious to the true identity of his brother's guest, having never met the King, himself, was surprised when the monk informed him that the guest was Henry VI.

Bringing along relatives Thomas, John, Richard, and Edmund Talbot, all from nearby Bashall and Salesbury, as well as the Yorkist knight Sir James Harrington, John confronted his brother's guest. A fight ensued, between John Tempest and Henry's faithful companion, John Tunstall, who defended the king.

Henry's small entourage managed to fight their way out of Waddington Hall, Tunstall possibly breaking John Tempest's arm in the process, but were all chased down, and captured, within hours. Henry was tied to his stirrups and led to London, where he would spend the next 5 years, as a prisoner, in the Tower of London. His captors were all well rewarded, including Henry's host, Richard Tempest. [3][4][5]

(Royal Ancestry) Henry VI of England, King of England died in the Tower of London 21 (or 22) May 1471. He was buried initially at Chertsey Abbey in Surrey. Later, when miracles occurred at his tomb, King Richard III had his remains removed to St. George's Chapel at Windsor in Berkshire.

(Royal Tombs of Medieval England) Henry VI died in the Tower of London soon after the battle of Tewksbury (21 May 1471), most likely murdered on the instructions of Edward IV. The following day his body was displayed at St. Paul's church and Blackfriars abbey in London 'opyn vysagid that he mygth be knowyn' and was observed to bleed on both occasions. On 23 May 1471 Henry was buried in the Lady Chapel of Cherstey Abbey, Surrey, a modest Benedictine house with no tradition of senior burial, close enough to Westminster but far enough away. Like other famous Medieval political casualties, Henry soon became the subject of a cult. Miracles were recorded at his grave, and in 1483 the Company of Mercers barred Chertsey as a place of Pilgrimage. On 12 August 1484 Richard III had Henry's remains translated to St. George's Chapel at Windsor, ironically the burial place of Edward IV.

Apparently the cult formed for Henry VI continued, with Henry VII having a particular interest in encouraging the Windsor cult, as Henry VI was his only blood link to the English crown. Henry's mother, Katherine de Valois, was also Henry VII's grandmother. In 1496 Henry VII began the construction of a new chapel at Windsor on the site of the thirteenth-century chapel of St. Edward to house the shrine of Henry VI and his own tomb. The following year, Henry VII's mother, Margaret Beaufort, proposed the foundation of her own chantry at Windsor. Henry VI's last surviving will, dated 1447, gives no instructions for his place of burial. In 1494 the Westminster abbot petitioned the Curia for the removal of Henry VI's remains to Westminster, describing Westminster as the royal mausoleum and referring to Henry VII's common lineage with Henry VI must have had the king's approval. And in 1498 the Westminster monks directed their petition to Henry VII. In 1498 the Privy Council approved to removal of Henry's VI's body to Westminster. But Henry VII's ambition to move Henry VI's body to Westminster was not approved by pope Julius II, and his body remained at Windsor, although Henry VII did have his own Westminster chapel built and a tomb for he and his wife installed there. But Henry VI continued to be a subject of veneration. In 1789 what may have been his coffin was unearthed at Windsor south of the high altar. And in 1910 what may have been the king's remains were found in a small box in a vault to the south of the Windsor high altar. The remains had been severely disturbed which may have happened when the king's remains were moved in 1484 when bones may have been stripped as cult relics. The remains were placed in a new coffin and reinterred. At present the black marble slab marking the grave of Henry VI at Windsor in the south choir aisle dates from 1790 and was placed in its present position in 1927.

Sponsored Search by Ancestry.com
DNA Connections
It may be possible to confirm family relationships with Henry VI by comparing test results with other carriers of his Y-chromosome or his mother's mitochondrial DNA. Y-chromosome DNA test-takers in his direct paternal line on WikiTree: 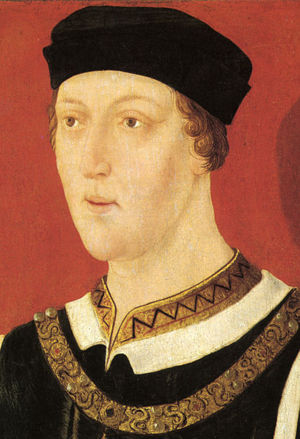 be put on the page in place of Notre Dame to connect the link, please?

Henry VI is 19 degrees from Claire Nava, 25 degrees from Levi Strauss and 3 degrees from Henry VIII of England on our single family tree. Login to find your connection.