Although Byram's obituary states Betsy's father was "David Lane", David was Betsy's brother and there are no documents establishing her father was ever named nor called, "David", whereas Robert Lain's probated Will (familysearch.org/patron/v2/TH-300-4329/-255-75/dist.pdf) bequeathed, "(Page 521) To Betsy Bybee, late Betsy Lain, her proportion, lot no. 2, containing 29-acres and bounded as follows, to wit:

A List of the Property of Robert Lain, Deceased, Sold by David Lain, Administrator on the 26th of April 1827

Will of John Bybee Barren County Kentucky May 21 1819 In the name of god amen: Fourth: I give and bequeath unto my son Byram Bybee the quantity of land on Nobob Creek out of the survey which I purchased of Robt. Craddock, Agent of Robt. Means, lying within the following boundary Towit: Beginning where Robt. Lanes line crosses the creek, thence with him to Hugh's line thence with Hugh's line to the corner thence to the creek leaving the spring of said Byram Bybee belonging to his said part about sixty yards on the right hand thence down the creek which it is by the will and desire he shall not sell or dispose of till he is twenty five years old.

ask our community of genealogists a question.
Sponsored Search by Ancestry.com
DNA Connections
It may be possible to confirm family relationships with Betsy by comparing test results with other carriers of her mitochondrial DNA. However, there are no known mtDNA test-takers in her direct maternal line. It is likely that these autosomal DNA test-takers will share DNA with Betsy: 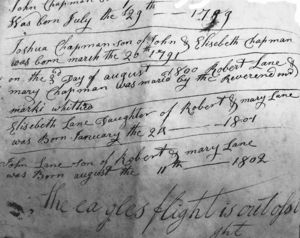 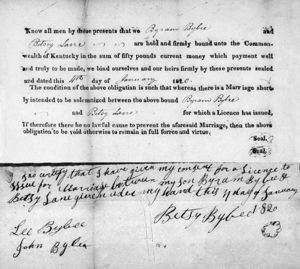 Betsy is 19 degrees from Danielle Liard, 14 degrees from Jack London and 15 degrees from Henry VIII of England on our single family tree. Login to find your connection.