William was the son of William de Lanvallei and Hawise de Boclande/Buckland.[1][2] His birth date is uncertain, but he was a minor when his father died in 1204.[1][2][3] He probably did not come of age until after 1210: in that year his mother and an uncle paid a fine of 200 marks to have custody of lands that had belonged to his father.[1][2] That points to a birth date likely to have been after 1190.

William inherited the Barony of Walkern, based in Hertfordshire.[3] He held lands in a number of counties in the southern half of England, including Berkshire, Essex, Hertfordshire, Huntingdonshire, Kent, Northamptonshire and Somerset.[1][2]

In the period 1212-1214, Alan Basset paid a fine to marry a daughter to William but this marriage appears never to have taken place.[4] Instead, William married Maud Pecche. Her marriage portion included the manor of Marston, Cambridgeshire.[1][2]

William and Maud had one daughter:

The following year he joined the Barons who compelled King John to agree to the Magna Carta, for which he was one of the Surety Barons.[1][2] In the summer of 2015 he was given custody of Colchester Castle, Essex. Along with other rebel Barons, he was excommunicated towards the end of 1215. His lands were confiscated, but restored when he returned to allegiance.[1][2]

"William de Lanvalei III (d. c. 1216), lord of Walkern (Herts.) was a member of a family of curialist administrators that had risen to prominence under Henry II and who owed much of their wealth to their years of service to the Crown and the opportunities for enrichment which these offered. It is a mark of King John’s mismanagement of the nobility that he should have so alienated such a man that he ended up on the baronial side in 1215.

"William was the grandson of the founder of the family fortune, William de Lanvalei I, a Breton whom Henry II appointed as his first seneschal, or administrator, of Rennes after his takeover of the duchy of Brittany in 1166. William served in the office for five years, crossing to England in 1171 or 1172 to become the king’s castellan of Winchester and serving thereafter in a variety of capacities in the king’s English administration. Probably as a result of his royal connections, William was awarded the hand in marriage of Gunnora, daughter and heiress of Hubert de Saint Clair, through whom he gained possession of the barony of Walkern, created for Hubert’s father, Hamo, in 1120 from the escheated lands of Eudo Dapifer (Eudo the Steward). William I died in 1181/2, leaving a son William II, who died in 1204, and was in turn succeeded by William III, the member of the Twenty Five, a minor on his father’s death.

"Like most thirteenth-century aristocratic families, the Lanvaleis had various claims to lands and offices which they pursued as and when opportunity and circumstance afforded. William’s father had brought a suit in the king’s courts against Hugh de Beauchamp over the manors of Eaton Socon and Sandy (Beds.), to which he laid claim by descent from his mother as successor to Eudo Dapifer, who had held the manors in 1120. Hugh appears to have lost possession of the manors for a time, as Gunnora was briefly in possession, but the Lanvaleis failed to establish a lasting title. William III’s own interest was rather in securing control of the royal castle at Colchester, again by right of descent from Gunnora. In Henry II’s reign the castle had been held by the justiciar Richard de Lucy, but the Lionheart had apparently granted it to William’s father, and he and his widow held it until 1209. In that year it was apparently lost to the family.

"William accompanied John on his expedition to Poitou in 1214 and was present at the truce concluded with the French king in September. It is impossible to trace the path by which he made his way into the baronial camp, but for him, as for others, the ties of kinship must have played a part. He was related to none other than Robert FitzWalter, the baronial leader, through his wife’s mother, who was FitzWalter’s niece. His own mother, moreover, was sister-in-law of Geoffrey FitzPeter, which made her the aunt of another future rebel, Geoffrey de Mandeville. William can thus be seen as belonging to the wide east of England network which was increasingly dominant in the baronial movement as it spread from its northern heartland.

"In July 1216, probably at a meeting of the council at Oxford, William secured a grant of custody of Colchester castle, for which he had striven for so long. He died shortly afterwards, leaving as his heir a daughter Hawise, who became the ward of Hubert de Burgh, the future Justiciar, and was married by Hubert to his John, to whose family the barony passed.

"It is tempting to associate the fine Purbeck marble effigy of a knight in the south aisle of Walkern church (Herts.) with this William, as lord of the manor. It shows the commemorated in a mail hauberk, a surcoat and a pot-style tournament helm. The effigy is one of a group of elegantly designed figures which includes three of the famous Temple Church effigies. On stylistic grounds the effigy can be dated to c. 1240-50, close enough in time to make William a possible candidate. The equally fine effigy of King John in Worcester Cathedral was not commissioned until the mid 1230s, some twenty years after the king’s death. One reason for associating the effigy with William is that he was the last of his direct male line, and the commissioning of an effigy in such cases was a way of keeping the family name alive. Yet it is important to say that the identification cannot be considered certain. The Lanvaleis were patrons of St John’s Abbey, Colchester, by right of descent from the founder Eudo Dapifer, and in an age when monastic burial was popular with the nobility it may well be that he was interred there. William’s grandfather, William I, had made a grant to the abbey ‘cum corpore meo’ (‘with my body’) implying that he desired to seek burial there. Unfortunately little remains of the abbey, and there is no documentary evidence which sheds light on burials within its walls. If the effigy at Walkern is not William de Lanvalei’s, it is probably that of his son-in-law, Sir John de Burgh. "

Cawley's 'Medieval Lands' database offers [1214-1216] as an estimated date of death.[4] This is possible because Cawley does not commit himself to the position that it was this William, rather than a different William (e.g. his 2nd cousin) who was the Magna Carta Surety in 1215. (Note that Cawley uses brackets to indicate uncertain information.)

There were two other people of the same name with profiles on Wikitree as at 30 April 2020:

There were other relatives of the same name in the same era and region - see Cawley's Medlands for details.[4]

This profile was reviewed and revised for the Magna Carta Project by Michael Cayley, finishing on 1 May 2020. 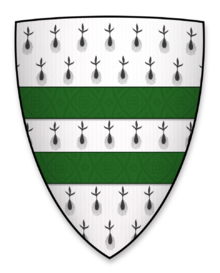 Michael Cayley
I plan to do some work on this profile as part of what I am doing for the Magna Carta Project on Surety Barons.
posted Apr 29, 2020 by Michael Cayley

Michael Cayley
I have now finished the main work I intend on this profile. If anyone spots any typos etc, please either correct them or message me. Thanks!
posted May 01, 2020 by Michael Cayley

Liz (Noland) Shifflett
um. No, the _Category_ "Lanvallei-3_Descendants" shows only MC-reviewed/approved descendants. If you click on http://www.wikitree.com/wiki/Category:Lanvallei-3_Descendants (the link that goes with the text "have been improved and categorized by the Magna Carta project."), the category is empty ... as it should be, since no MC Trails have been reviewed/approved yet.

If you click Descendants from the dropdown menu under "Lanvallei-3", or otherwise arrive at http://www.wikitree.com/genealogy/Lanvallei-Descendants-3 , you'll get his descendants according to existing WikiTree connections.

Andrew Lancaster
Don't think the remark in the text is correct that clicking on "Lanvallei-3 Descendants" will only show descents which "have been improved and categorized by the Magna Carta project." (As per recent discussions on Base Camp page, this line does have apparently wrong descents still.)
posted Oct 11, 2015 by Andrew Lancaster