“(I) Stephen Larrabee, the immigrant ancestor, was born about 1630, probably in France, and came to this country with William Larrabee (unknown relationship), and both settled in Malden, Massachusetts, where William died. He [William Larrabee] left no children, and bequeathed his estate at Malden to his Stephen' children. This will was dated October 24, 1692, and the inventory is dated September 28, 1692.

Stephen Larrabee was a soldier in the Narragansett war. He settled in North Yarmouth, Maine, but his family had to leave the town during King Philip's war. A petition dated March 6, 1732-33, is the only known record of his sons.

Each child had a grant of ten acres of land on account of their father's service in the Narragansett war.” - page n 295 [1901] NEW ENGLAND FAMILIES by William Richard Cutter; Volume IV [1914]

(I) Stephen Larrabee, immigrant ancestor, with William Larrabee, a kinsman [his younger brother], came to New England with the early immigrants. William settled in Maiden, Massachusetts, where he married, November, 1655, Elizabeth Felt, and died leaving no children. His will, proved October 24, 1692, names wife Elizabeth, and several kinsmen and kinswomen, named Stephen & William, Isaac, Thomas. Samuel; Benjamin, and Jane Larrabee, and Hannah, a daughter of said Jane, also John Larrabee, a kinsman "beyond the sea. He bequeathed to Stephen Larrabee "my cousin [nephew] Stephen's eldest son," he calls Nathaniel Nichols another kinsman of his. His estate was enumerated in an inventory taken September 28, 1692, as a house and barn with twenty acres of land.

William Larrabee was a soldier in King Philips' War, 1675-6. Stephen Larrabee was one of the pioneers of North Yarmouth, Maine, where he early purchased lands. As the lands were not occupied for many years because of danger during the period of Indian hostilities, it is likely that he himself did not occupy them, but at a later period a petition dated March 6. 1732-3, in which the names of his sons appear, would indicate that they, at least, had an interest in them, if not a settlement upon them. What relation existed between Stephen and William is not clear, but it may have been a "cousin," or nephew, as that term was commonly defined at that time.

Stephen Larrabee was a soldier in the early Indian wars in Maine. The name of his wife and the date of his marriage are unknown, and careful research has failed to reveal either the date of his death or that of his wife. This is not strange,as the unsettled state of a new country, harrassed by hostile Indians rendered many things peculiar to a more settled and orderly community next to impossible.[1]

"One of the first pioneers of No. Yarmouth, Maine, with his younger brother, William, owned land on the Royal River purchased from the Indians before the regular settlement of the town. [On] 22 Sep 1680, a charter was granted to Joseph Phippon and others for formation of the town. The town was destroyed by an Indian raid in 1688, and reformed in 1721-1722. Is or descended from French Huguenots. He was one of the North Yarmouth men killed in the attack on Jewell's Island. The news reached Wells on the 7th [Sept. 1676]." NOTE: No sources shown


Memories: 2
Enter a personal reminiscence or story.
Adrian Stanley
"Stephen Larrabee, who bought land on Yarmouth Neck from the Indians and was killed by them on Jewell's Island, Sept., 1676."

posted 24 Dec 2015 by Adrian Stanley   [thank Adrian]
Anonymous Wood
History in family says Stephen was born in Gave de Pau, a mountain town on the border of France and Italy, which was a Huguenot town.

One of the first pioneers of No. Yarmouth, Maine, with his younger brother, William, owned land on the Royal RIver purchased from the Indians before the regular settlement of the town. 22 Sep 1680, a charter was granted to Joseph Phippon and others for formation of the town. The town was destroyed by an Indian raid in 1688, and reformed in 1721-1722. Is or descended from French Huguenots. He was one of the North Yarmouth men killed in the attack on Jewell's Island. The news reached Wells on the 7th

posted 28 Jan 2011 by Anonymous Wood
Login to add a memory.
Is Stephen your ancestor? Please don't go away! 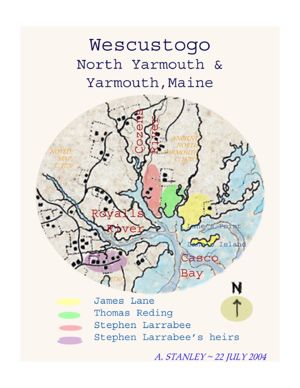 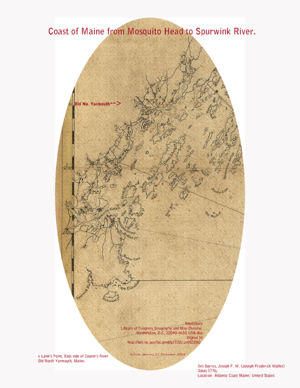 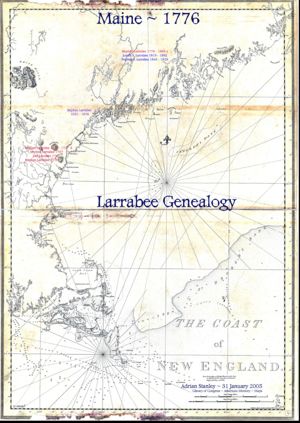 Map of the Province of Mayne 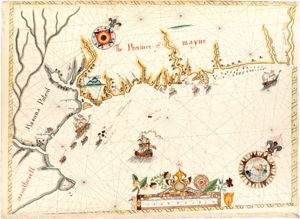 S (Hill) Willson
Stephen Larrabee's wife's name is unknown according to many quality sources. Torrey shows her name as _______ [?Mains]. Per Genealogical Dictionary of Maine and New Hampshire (Vol 3, Stephen Larrabee), "Col. Banks conj. that he was a s.-in-law of John Mains".
posted Mar 11, 2020 by S (Hill) Willson