Johann Last, like a lot of ancestors born in the 1800s, has some variants related to his actual birth day. According to census records, passenger lists, and marriage registers he was either born in 1820, 1826, or 1828 somewhere in what was once called Prussia.

After some research and lots of luck, we think we have found what is more than likely Johann’s baptism record in the parish of Batzwitz (now called Baszewice) in the collection of Germany, Pomerania church records, which also included a few other smaller parishes in the area.

On the first page of the 1825 baptism records for the parish of Barkow there is one for a “Johann Wilhelm Gottlieb,” his full name from his marriage record.[1]

Unfortunately, it seems that Johann is listed as uneheliche sohn which translates to “illegitimate son.” It does list his mother as Dorothea Sophia LAST, but no father.

As of Feb 2019, recent research into the Greifenberg church records indicates that Johann's mother had another illegitimate daughter named Hanne Charlotte Karoline in 1829. In 1830, she married a Johann Schmitt and continued to have a few more children with him. All information indicates that there is a good chance Johann Schmitt is the biological father of Johann and his sister, but more research is ongoing.

According to the church records, Johann and Charlotte Strassman were married in what was then called Plathe, but today is called Płoty. They were married on September 21, 1849.[2] It lists Johann’s residence as a town to the south called Minten. Minten is now called Miętno.

Johann and Charlotte's first three children, Augusta, Carl, and Heinrich were born in Prussia. Johann and his family left Prussia and arrived at the Port of New York on September 14th, 1857. They departed from Hamburg, Germany on the Schooner Charles Smith on July 14th 1857 for a 2-month trip.[3]

Johann, an immigrant from what is Poland today, moves to a new country in 1857 and less than a decade later he joins the Union army to fight for his new county.

After some research into where 50th Infantry of Company K was located, it seems they were stationed in what was the Dakota Territory at the time to protect the western front.

After reading some information about what went on in that area during the Civil War, it seems that he may have been at the forefront of some of the fighting with the Yanktonai bands of the Sioux tribe at the time. One location that it was located was Fort Rice. Their website has a small write-up from around this time, including the conditions he may have dealt with.

Life was not easy in these small frontier forts, isolated by distance and a seasonally ice-bound transportation system. During the fort’s first year, eighty-one men died—thirty-seven from scurvy, twenty-four from chronic diarrhea, three of typhoid fever, ten of other diseases, and seven killed in combat.[6]

According to a history about the Union army, his regiment fought in one battle, at Yankton Reservation, Dakota Territory on 16 September 1865.

Johann Last died on August 14, 1872.[4] His cause of death is listed as “Inflammation” on other records. Inflammation can be caused by things such as frostbite or even wounds. Two things he could have easily received during his tenure in the Dakota Territory during the Civil War. His is buried in Port Washington, Ozaukee, Wisconsin at Union Cemetery.[7][8]

More detailed information on Johann Last is located on his "Everything I Know About Johann Last" website.

ask our community of genealogists a question.
Sponsored Search by Ancestry.com
DNA Connections
It may be possible to confirm family relationships with Johann by comparing test results with other carriers of his Y-chromosome or his mother's mitochondrial DNA. However, there are no known yDNA or mtDNA test-takers in his direct paternal or maternal line. It is likely that these autosomal DNA test-takers will share DNA with Johann: 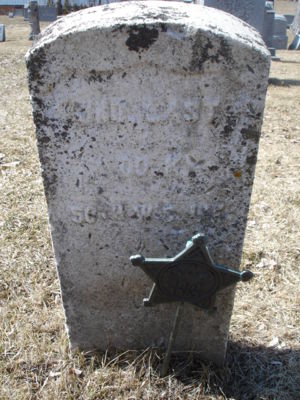