Born in London in 1923, he was the only child of Lieutenant General Sir Sydney Turing Barlow Lawford, KBE (1865-1953) and May Sommerville Bunny (1883-1972). At the time of Peter's birth, however, his mother was married to Dr. Capt. Ernest Vaughn Aylen, one of Sir Sydney's officers, while his father was married to Muriel Williams.[1] At the time, May and Ernest Aylen were living apart. May confessed to Aylen that the child was not his, a revelation that resulted in a double divorce. Sir Sydney and May then wed in September 1924 after their divorces were finalised and when their son was one year old.[4]

Lawford's family was connected to the English aristocracy through his uncle Ernest Lawford's wife (a daughter of the 14th Earl of Eglinton) as well as his aunt Ethel Turner Lawford (who married a son of the 1st Baron Avebury). His aunt Jessie Bruce Lawford, another of his father's sisters, was the second wife of the Hon Hartley Williams, senior puisne judge of the Supreme Court of the colony of Victoria, Australia. A relative, through his mother, was Australian artist Rupert Bunny.[citation needed]

He spent his early childhood in France, and owing to his family's travels, was never formally educated. Instead he was schooled by governesses and tutors and his education included tennis and ballet lessons.[5] "In the beginning," his mother observed, "he had no homework. When he was older he had Spanish, German and music added to his studies. He read only selected books—English fairy stories, English and French classics; no crime stories. Having studied Peter for so long, I decided he was quite unfitted for any career except art, so I cut Latin, Algebra, high mathematics and substituted dramatics instead."[5] Because of the widely varying national and religious backgrounds of his tutors, Lawford "attended various services in churches, cathedrals, synagogues and for some time was an usher in a Christian Science Sunday School..."[6] Around 1930, aged seven, he made his acting debut in the English film Poor Old Bill.[citation needed]

At the age of 14, Lawford severely injured his right arm in an accident when it went through a glass door.[7] The injury greatly compromised the use of his lower arm and hand with irreversible nerve damage,[8] which he later learned to hide.[9] The injury was judged to be serious enough to prevent his entrance into the armed forces, which his parents had planned.[10] Instead, Lawford decided to pursue a career as an actor, a decision that resulted in one of his aunts refusing to leave him her considerable fortune, as originally planned.[11] .

Lawford suffered from kidney and liver failure largely due to his years of drug and alcohol abuse, and he died from a heart attack in 1984 when he was 61-years-old.[1] 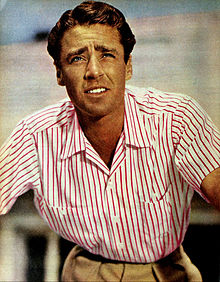 Peter is 22 degrees from Cecil B. DeMille, 23 degrees from Rosalie Neve and 17 degrees from Henry VIII of England on our single family tree. Login to find your connection.