Huddie was born in 1889 to parents Wesley Ledbetter and Sallie Brown. The date of 20 Jan 1889 was given by him on his WWII Draft Registration.

He received his first musical instrument, an accordion, as a gift from an uncle after he had moved to Texas with his father and mother, and he played on the streets of Dallas with such legends as "Blind Lemon" Jefferson.

In 1918 he was imprisoned for murder, after serving six years, he was pardoned by Governor Pat Neff, who had visited the prison and heard him sing.

Is Huddie your ancestor? Please don't go away!

ask our community of genealogists a question.
Sponsored Search by Ancestry.com
DNA
No known carriers of Huddie's ancestors' DNA have taken a DNA test. 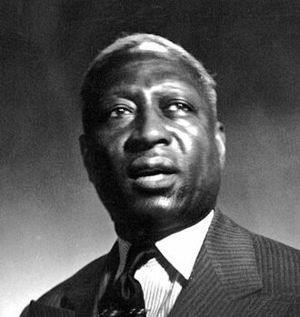