He is buried in the McClelland Cemetery (formerly known as the old Lee Cemetery), Hurley, Stone County, MO.

Thomas E. Lee enlisted on 06 Jun 1861 at Stone County, Missouri as a private under Capt. Galloway in Co. D. [or F ?] Stone Co. Home Guards. Mustered in 06 Jun 1861 at Stone Co, MO. Company disbanded 13 Nov 1861. [Source: Handwritten copy of State of Mo, Adjutant (?) General Office, City of Jefferson Oct 11, 1938] He was wounded and captured by Rebel soldiers 01 Nov 1861, and was released when the company disbanded 13 Nov 1861. [Source: History of Stone County Missouri p 520] He then enlisted in the regular Army 72 Reg. E.M.M. as Private, in Co. A under Capt. Ball, 28 Jul 1862 at Springfield, MO. He was home sick on leave when the episode occurred with gangster, Alf Bolin. Thomas E. Lee served in the Union Home Guard of Stone County. It was his duty to alert the Union soldiers of the location of the [Alf ] Bolin gang who terrorized and murdered the settlers in the area.

Published stories of the account have varying circumstances regarding his death depending on who is telling the story. According to the “Widow’s Declaration for Pension” filed by Phebe Lee on 17 Feb 1880, it states that Thomas Lee died of yellow jaundice. He did not drown in the River when going for help, nor did he die in a friend's home after going for help. Calvin Cloud was murdered on 10 Oct 1862, and Thomas died on 16 Dec 1862. Both men are buried in the old Lee Cemetery later identified as McClelland.

ask our community of genealogists a question.
Sponsored Search by Ancestry.com
DNA Connections
It may be possible to confirm family relationships with Thomas by comparing test results with other carriers of his Y-chromosome or his mother's mitochondrial DNA. Y-chromosome DNA test-takers in his direct paternal line on WikiTree: It is likely that these autosomal DNA test-takers will share some percentage of DNA with Thomas: 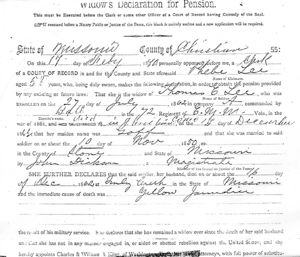 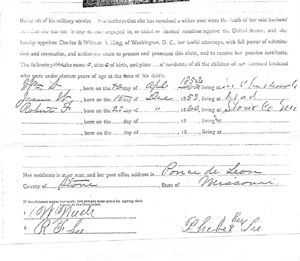