He attended Harvard University. He was a planter, a Confederate cavalry General in the American Civil War, and later a Congressman from Virginia.

He entered the United States Army in 1857 as a second lieutenant. He served with the 6th U.S. Infantry under Albert Sidney Johnston, and participated in the Utah War against the Mormons. In 1859, he resigned from the U.S. Army to operate his White House Plantation, on the south shore of the Pamunkey River, in New Kent County, Virginia. Rooney was married in 1859 to Charlotte Wickham, a descendant of the attorney John Wickham and his wife. They were living at the plantation in New Kent County in 1860. War came to the south and to Virginia in April of 1861.

War between the Union and the Southern Confederacy

Rooney became a captain in the Confederate Army cavalry the 9th Virginia Regiment. He was the Cpt of Company H Lee's Rangers. and was soon promoted to major. He initially served in western Virginia under the command of Brig. Gen. William Loring during 1861 and early 1862. He was then placed under the command of Maj. Gen. J.E.B. Stuart, becoming a lieutenant colonel, and later colonel in the 9th Virginia Cavalry.

After the Battle of South Mountain, Lee was promoted to brigadier general. He fought at Antietam under the command of Brig. Gen. Fitzhugh Lee, his cousin. He commanded the 3rd Brigade of Stuart's Cavalry Division at the Battles of Fredericksburg and Chancellorsville. He was wounded during combat at Brandy Station at the beginning of the Gettysburg Campaign and was captured by Union forces at Hickory Hill, Virginia, two weeks later, while recuperating. He was a prisoner of war in New York State until returned to the Confederate Army on February 25, 1864. To accomplish this he was exchanged for Confederate captive Union Brig. Gen. Neal S. Dow. In April, he was promoted to major general and commanded a division in the Cavalry Corps during the breakout from Petersburg and the retreat of his father's army in the Appomattox Campaign. By the end of the war, he had risen to second-in-command of the Confederate cavalry. He surrendered along with his father at Appomattox Court House.

Life after the War

Lee returned to White House Plantation and planting after the war. Nearby, his younger brother Rob lived at Romancocke Plantation across the river in King William County.

After his mother died in 1873, Rooney inherited Ravensworth Plantation, the old Fitzhugh family property (near present-day Springfield) in Fairfax County with 563 acres (2.28 km2) of land. He moved there from White House. In 1875 Rooney was elected to the Virginia Senate, serving until 1878. He was then elected as a Democrat to the United States House of Representatives in 1887. He served in the House until his death at Ravensworth in 1891. He is interred in the Lee Chapel at Washington and Lee University in Lexington, Virginia, with his parents and siblings.

Rooney married twice, first in 1859 to Charlotte Wickham, a descendant of the attorney John Wickham and his wife. They had two children, a boy and a girl, both of whom died in infancy. Charlotte died in 1863. Their names were Robert Edward Lee II and Mary Custis Lee. 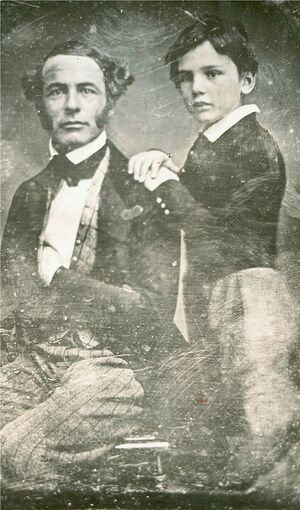