John Lees was born in Staffordshire, England in 1771. His native village was Penkhull, Stoke-on-Trent. He enlisted as a private in the 102nd Regiment of the New South Wales Corps on 18th September 1796 at Chatham, on the south bank of the Thames, thirty miles east of London. His name was included in a list of recruits raised by Lt. Col. Grose for two additional companies of the Corps. He was a private under Captain Rowley's Company. He came to New South Wales on the convict transport ship "The Ganges" which arrived at Farm Cove on June 2 1797. He was listed for discharge in 6 years, fourteen days after May 14 1803. The Monthly Pay List to 24th April 1803 showed an entry in Captain Wilson's company under privates: "John Lees 25th March to 24th April, 31 days, 14 shillings. Disch. in 14 days. Pay in advance." He was a heavy drinker and would drink to the point of blacking out. John Lees was officially granted 90 acres of land in an area known as Birds Eye Corner, by Governor King on 4 June 1804. He married Mary Stevens, a convict, on November 20 1809 when he was 32. After the initial years of struggle, John began to prosper, and gave freely to the Church. In 1821 he petitioned for a further 80 acre grant, which he called "Stoke" in recognition of this native place in Staffordshire. This grant became official in 1831, with details being published in the Sydney Gazette dated 15 September 1831. On 21 January 1825, he applied for a further grant of land, which resulted in a grant of 283 acres to the east of his 80 acre grant. This was shown as "Pankle" on the Castlereagh Parish Map, and became official in 1831.

John was bitten by a snake one night while collecting wood. In alarm he raced to Richmond where he went to a Church of England Clergyman, Rev R Cartwright, then collapsed. Medical help and spiritual power led to his recovery and prompted his deep desire to put his life under God's control. This Christ-centered experience was the start of a life which so changed him that many who previously were beaten and broken were won to new life by his radical witness. He immediately started prayer meetings in his home and set aside two acres of land to be cultivated and the money earned to go to the church. He and his family had been praying for 3 years for a missionary to be sent to this district, which would have placed these events to 1812-1813. He then met Samuel Leigh, the first Wesleyan Missionary on his first journey inland from Sydney. John Lees Jnr tended Samuel Leigh's horse whilst the evening family prayers were being conducted. This would have been around 1815-1816. After he visited a few times, the settler made up his mind to build a chapel large enough for people to attend public worship on his farm. This was the first place of worship built expressly for that purpose in Australia. John Lees supplied the land, building materials and played a major part in erecting the first chapel. It was weatherboard, built of slabs an shingles, 24ft long by 14 ft wide. The chapel adjoined his homestead. Over the door was a brightly painted sign "Prepare to Meet Thy God". Samuel Leigh opened the chapel on October 7 1817. Rev Samuel Leigh opened the chapel on October 7 1817. John Lees then opened a Sunday School in his chapel for as many as would attend. He was a strict man in his observance of the Sabbath. Later he and a few friends built a second chapel in 1819 on the 'devoted acre' on the side of the public highway. It was 28ft long by 14 ft wide and 12ft high, built of brick. A portion of the land was set apart for a burial ground. John Lees converted the first chapel into a sleeping room for the visiting preacher. He built a third chapel in June 24 1823 on Mr Stockfish's land. He moved to Sydney where he was a local preacher and was on the Committee of Methodist Laymen, as recorded in the minutes of October 2 1822. He and his family lived in Castlereagh Street, Sydney. Whilst in Sydney he became paralysed by a stroke. The family returned to Castlereagh where he lay bedridden for seven years. His physician prescribed a certain amount of brandy every day which led to a desire for more than the doctor allowed - with disastrous results. He was unable to carry on Sunday School or to look after his affairs. His businesses declined rapidly. The servants in charge of his Sydney business plundered him so that he became almost as poor as he was when he started. In 1832 the Rev Joseph Orton visited him and found him very ill and depressed from the effects of the stroke. Without Johns energy and zeal, only a few people attended the chapel and the itinerant preacher was not going to stop by there anymore. John would not tolerate such a decision and the missionary continued to visit. Not only that, but his wife and children "did not attend his instructions". He was 63 when he died on August 28 1836 and was buried in St John's Church of England Cemetery, Castlereagh (as the Wesleyans did not have a license for baptisms, marriages and burials at that time). It is noted that "several members of the late Mr John Lees' family have been soundly converted to God." On 15 & 16th October 1921 John and his wife Mary were re-interred in the cemetery of the Castlereagh Methodist Church in the grounds of the site of the first chapel. The existing chapel was built in 1847, 16 years after John died and is heritage listed. John Lees' story is told in a number of books: "A Spark of Grace" by Dr Gloster S Udy from colonial days to 1973; Colonial Chapel to Cathedral Church in Australia's Cradle City"; "A Legion of Lees"; "John Lees Chapel Builder"and "Lees for Christ" by Merle Kavanagh. 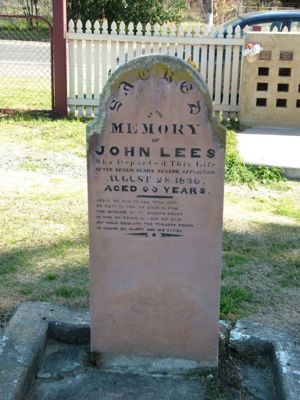 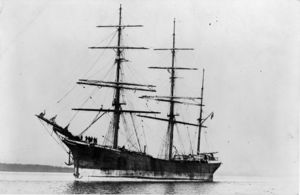 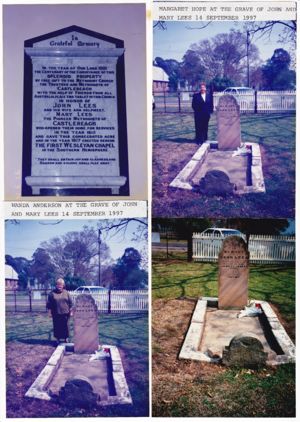 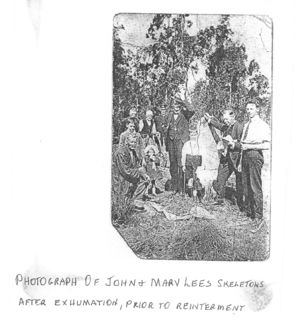 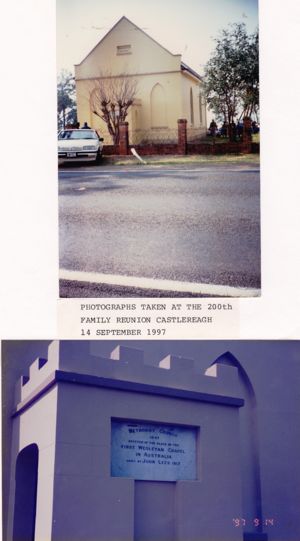 posted Nov 27, 2017 by Gaye Bartholomew
Rebecca Coombes
John Lees was an early government soldier who remained in the colony and took up land, and later donated some of it to the Wesleyan Methodist Church.
posted Oct 31, 2017 by Rebecca Coombes