Conrad Leichleiter was the eighth child and seventh son of Johann Conrad Leichleiter and Maria Barbara (Muller) Leichliter. Conrad's oldest brother was Johann Jacob Leichleiter, who inherited their father's land in Frederick County, Maryland. On March 1, 1787, Conrad, his brother Johann Peter purchased the land described as all the tract of land called 'Green Springs', all of 'Small Street', and part of 'The First Dividend' for their mother.

In 1813, Conrad and his brother, George bought an estate in Jefferson County, West Virginia, now on the National Historical List. The 218 acre farm, 'Springdale' on Flowing Springs Road 1/2 mile south of Shepherdstown, was appraised at $40 per acres, worth $8720 circa 1845. Springdale consisted of stone house, slaves, orchards, and a race track. The house is According to a descendant in Jefferson Co., the same land today (2003) would be worth between 1 and 2 million dollars. [2]

Conrad and Margaret had the following children:

In his will, Conrad left all of his property and monies to his widow, Margaret, and after her death, the properties were to be sold, and distributed equally to his children or heirs.

"Conard Leiklity" on the United States of 1800, living in Emmitsburg, Frederick county, Maryland may well be this Conrad Leichliter. There is an image of the actual census record on FamilySearch.com [4]

Is Conrad your ancestor? Please don't go away!

ask our community of genealogists a question.
Sponsored Search by Ancestry.com
DNA Connections
It may be possible to confirm family relationships with Conrad by comparing test results with other carriers of his Y-chromosome or his mother's mitochondrial DNA. However, there are no known yDNA or mtDNA test-takers in his direct paternal or maternal line. It is likely that these autosomal DNA test-takers will share some percentage (beta) of DNA with Conrad: 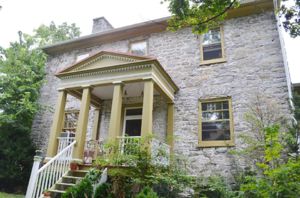