Thomas was the eighth and last child of Gabriel and Mary Lemen. He first appears in the 1860 census in his parents household in Shelby Township, Jefferson, Indiana.[1] His father was about 65 years old when he was born.

His father having died in 1869, he next appears in the 1870 census in the household of his oldest brother, John, still in Shelby Township, Jefferson, Indiana. There was some confusion that he was the son of John due to being enumerated in his household. However, John was not married until 1860 (six years after the birth of Thomas) thus Thomas was simply enumerated in the household of his brother, John, at the time of the census.

He married Alice Jane Shreve in 1877 and next appears in the 1880 census in Dillsborough, Dearborn, Indiana, with his wife Alice and their first child, Estella. After the 1880 census, he fathered two boys and two more girls.

A newspaper account suggests that he may have died in 1891 in Rexville, Indiana.[2] He most likely was buried in the West Fork Cemetery in Rexville where his wife, Alice, his daughter, Estella, his daughter Myrtle and her son, Raymond are buried.

A date of death of 3 November 1891 is on various websites, without any source, which would have him die at an age of around 37 years. His wife re-married in 1894.

A search needs to be made of the Ripley County Board of Health for a record of his death. Also, a search needs to be done of the grave markers in the West Fork Cemetery in Rexville, Indiana. He does not appear on Find-A-Grave but that cemetery is only 83% photographed. 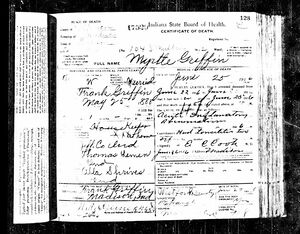 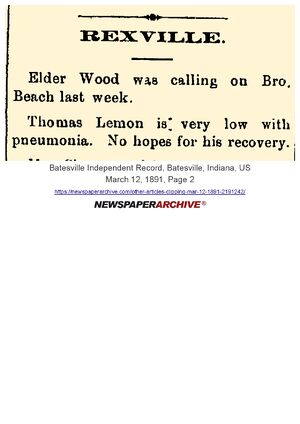