Meadowlark Lemon was an American basketball player, actor, and Christian minister. He was often known as the Clown Prince of Basketball, due to his incredible talents at the game and his ability to make people laugh.

Meadow was born on 25 April 1932 in Wilmington, North Carolina as George Meadow Lemon III. His father, George Meadow Lemon, Jr. (aka the Second) worked in the paper industry and his mother, Mamie Nesbit, is mostly unknown. His parents divorced prior to when he began attending grade school and he remained with his father. Meadow grew up in Wilmington and appears to have developed a love of all the things boys normally enjoy - movies, friendships, and sports.

Meadow built his first basketball hoop with a wire coat hanger and an onion sack, and used a Carnation milk container for his first basketball. He attended Williston Industrial School for his High School, and played both football and basketball there. He graduated in 1952, and intended to go on to college. He enrolled in Florida A&M, but after only two weeks in school he received his draft notice. He would then spend the next two years in the U.S. Army, travelling to both Austria and West Germany during his time in the military. He briefly left his Army training in 1952 due to the tragic death of his father.

Returning from overseas, he recalled the times in the past when he had watched the Harlem Globetrotters play. The Globetrotters were formed back in 1926 as an exhibition basketball team. Initially, they played fairly straightforward basketball until the 1940's when they began to introduce comic routines. Meadow had seen them play in a cinema reel when he was only 11, and it was an image he would never forget. In 1954, Meadow applied to the Globetrotters and was accepted. He only missed out on playing one game in all his years with the team, which ended up spanning 16,000 consecutive games in his streak. He decided to call himself "Meadowlark" as his nickname while playing for the Globetrotters.

He also married his childhood sweetheart, Willye Maultsby and the two began having children together. Between 1955 and 1967, they would have a total of ten children. Their lives together started off happy, but with all his travelling with the team, they faced a number of challenges.

Meadowlark Lemon became known quickly for his comic antics, his quick hands, and his incredible half-court hook shot that rarely seemed to miss. He quickly became a star player on the team, and through the mid-1950's and 1960's, he travelled all over the world with the Globetrotters. From military bases, to aircraft carriers, and even to Russia where the Globetrotters played to an audience of 14,000 who sat in silence as the team played against their opponents, the San Francisco Chinese.

His role with the Globetrotters led to his image on merchandise and even to Hollywood. His image appeared in the Harlem Globetrotters cartoon, although his voice was portrayed by Scatman Crothers. Later versions of the cartoon included Lemon's voice, as well as those of his teammates. He appeared in Scooby Doo movies as well, and in 1978 even expanded into Burger King commercials. He continued to play with the Globetrotters through the 1970's and in 1979 after fighting with management over a contract dispute, he officially retired from the team.

As his professional life struggled, he encountered similar struggles in his personal life. He and his wife had been facing an uphill battle for some time, and he began cheating on her while he was out touring with the team. In April 1977 it came to a head, as the two divorced. They continued to argue about many things, and in 1978 in a car chase out of the movies, Willye chased Meadowlark down the streets of New York, ramming him from behind with her car. When he stopped and got out of his car to gain the attention of police officers, she exited her vehicle and stabbed him in the back with a steak knife. She was arrested and he was rushed to the hospital where they removed the knife. She later pled guilty to simple assault and was sentenced for her crime.

The 1980's were a time of change for Meadowlark. Meadowlark went on to form his own team in 1980, the Bucketeers. They were a Globetrotter imitation team and only lasted 3 years. He then played for the Shooting Stars between 1984 and 1987. By 1988, he formed Meadowlark Lemon's Harlem All-Stars Team and played with them through at least 1994. In 1994, he rejoined the Harlem Globetrotters and played 50 games with them, even while still playing with his own All-Stars. He also made a few appearances on the small screen. In 1980 he made a small appearance on a television show called The White Shadow, as well as in some skits for 3-2-1 Contact. In 1983 he was on an episode of Alice.

In 1986, he turned his life around and rededicated his life to God and became a Christian ordained minister. He turned to gospel singing and began exploring what he might do with the rest of his life. He married Dr. Cynthia Lemon, a doctor of naturopathy, (maiden name unknown) in 1994, and the two of them founded the Meadowlark Lemon Legacy Foundation (MLLF), an organization dedicated to changing lives, to change the world. They created the Camp Meadowlark Basketball Camp to bring joy, hope, and inspiration to children in need. In 2003, Meadowlark Lemon was inducted into the Naismith Memorial Basketball Hall of Fame. They had 10 children: Richard, George, Beverly, Donna, Robin, Jonathan, Jamison, Angela, Crystal Joy (Brix), and Caleb Lark.

Is Meadowlark your relative? Please don't go away!

ask our community of genealogists a question.
Sponsored Search by Ancestry.com
DNA
No known carriers of Meadowlark's ancestors' DNA have taken a DNA test. 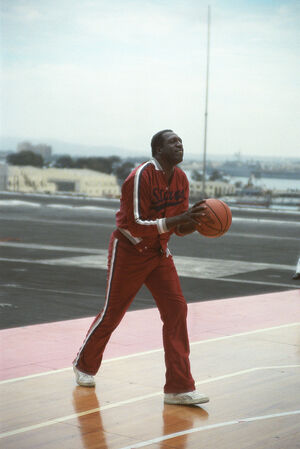