Samuel was a Friend (Quaker)

Samuel Levis, born 30 September 1649 at Harby, Leicestershire, England, was the son of Christopher Levis of Harby, yeoman, and Mary Need.[1][2]

Samuel was a Maltster and it is believed he trained at the Brewery of Nottingham Castle. It is in Nottinghamshire that he courted Elizabeth Clator (aka Claytor), the daughter of William Clator (wife unknown), and where her brother Samuell approved of her marriage to Samuel at a Friends Nottingham Meeting on 4 March 1680.[3] They were married on 4 May 1680.[2] He was age 29 and she was about 25. They had seven children (the first two born in England):[4][5]

Samuel was among the early colonists who emigrated to America in 1682, bringing servants and material for building a home for his family before returning to England to get them.[5][6][7] Before leaving England a second time, Samuel, in conjunction with his lifelong friend William Garrett, purchased 1000 acres of the land of William Penn from John Lobe, a Bristol land speculator.[3][4][8][9] Samuel left to permanently settle in Pennsylvania from Bristol, England in August 1684 aboard the ship Bristol Merchant under the command of John Stephens, with his wife Elizabeth, 3 year old son Samuel Jr,[9] and his younger twin sisters Sarah and Hannah. Since Samuel came with only one child, it is believed that his daughter Alice died before or during the trip at about 2 years old.[3][4] Samuel brought a certificate from the Friends Meeting in Harby, Leicestershire which was presented to a meeting of Friends held at "The Governor's house" in Philadelphia 4 November 1684.[2] Their removal certificate from Harby was dated 20 July 1684[1] and can be seen in the Philadelphia, province of Pennsylvania, Friend's records.[5]

Samuel was a man of considerable means and much influence especially within the Society of Friends. He was a minister of that faith and a very devout man in his walk of life. He was among the first settlers in Delaware county[7] and was barely settled when his friends first induced him to represent Chester County in the provincial Assembly in 1686. Samuel would continue to be a member of the provincial Assembly in 1689, 1694, 1698, 1700, 1706-1709. He was appointed justice of the peace for Chester County in 1686 and again on 2 November 1689. In 1692 Samuel was appointed as a member of the Governor's Council.[10] Notwithstanding his many official duties, Samuel, a man of economical and business-like habits, always found time to attend carefully to the religious and charitable duties as a member of the Society of Friends.[11]

Springfield is first mentioned as a governmental entity in 1686 and farming and the grazing of cattle were the principal occupations of the inhabitants of the township. Because of the ample water supply existing in the township every creek and run supported its grist mill and furnished power for the various colonial types of manufacturing.[12] Samuel and his family would eventually settle in Springfield Township, province of Pennsylvania[1] in 1692.[10]

On 27 August 1692 Samuel bought 150 acres bounded on the northwest by a bulge in Darby Creek in Springfield from Owne Folke, a tanner from Wales, and moved his family there.[3] His Georgian style home, still standing today, sits on 3.6 acres of open and wooded space tucked away in the Colonial Park Section of Springfield. It is all that remains from his original 150 acre parcel. It is a few miles south of Philadelphia on the Delaware River where there were numerous streams well suited for mills that his son Samuel Jr would later own and operate. The Levis Home remained in the family until 1925, passing through eight generations of Levises.

The Samuel Levis House is called the “Checkerboard" House because the bricks created a checkerboard effect using the Flemish bond (a popular pattern found in many historic houses in Philadelphia). It is one of the county's oldest and best-preserved historical homes. It contains six fireplaces and lead glass, diamond-shaped windows. Most of the floors are the original random width flooring and the uneven winding stairs with the carved finial on the newel post remain undisturbed. There was once a smokehouse in the attic.

The hearth in the cellar is believed to have been one of William Penn's favorite places to relax when he visited his good friend Samuel Levis. The original kitchen was once in the basement. It includes a great wooden bolt on the door, a brick floor with a walk-in fireplace, huge storage cellars and a tunnel said to be used by the Underground Railroad.[13]

Samuel Levis died between 4 October 1728 (date of will) and 13 April 1734 (date of probate),[1][2] probably in Springfield Township, Chester County. It is widely believed that he died in March 1734. In his will he left £10 each to his grandchildren; his Negro man Jeffry to his daughter, Elizabeth Shipley, and the remainder of his estate to his wife for life. At her death one half of his estate was to be equally divided between his son, Samuel, and daughter, Elizabeth; the other half between his son, William, and daughter, Mary Pennock. He referred to a marriage settlement, dated 5/6 March 1725, for his wife.[10]

Many of the early settlers are buried in the ancient Quaker Burial Ground, located at the intersection of Old Sproul Road, or as it was known in colonial days Chester Road, and Springfield Road. Given to the Quakers by Bartholomew Coppock, the younger, in 1686, the two-acre tract contains a possible 5,000 burials, and while few of the graves are marked today with headstones, those that are marked bear the names of families appearing on the early land-grant lists.[12] As a prominent and influential Quaker it is possible that this is where Samuel Levis was buried.


He is also a descendant of Magna Carta surety barons (see below).

This profile was reviewed/approved for the Magna Carta Project by Michael Cayley on 28 January 2020.

Samuel Levis is listed in Magna Carta Ancestry as a Gateway Ancestor (vol. I, pages xxiii-xxix) in a Richardson-documented trail to Magna Carta Surety Barons Hugh le Bigod and Roger le Bigod (vol. II, pages 221-223 NEED). Samuel is also the Gateway in trails identified by the Magna Carta Project to surety barons Saher de Quincy, John de Lacy, Gilbert de Clare, Richard de Clare and John Fitz Robert. These trails were developed for the Project by John Sigh, were badged in February 2020 by Michael Cayley, and are set out below.

Badged trails to Quincy, Lacy and the Clares:

Sponsored Search by Ancestry.com
DNA
No known carriers of Samuel's DNA have taken a DNA test.

Hearth in the cellar 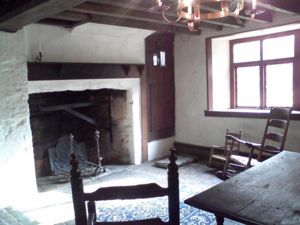 Dick Gates Sr.
Do which ever you prefer. It seems they want me to say more to get this message through.
posted Jan 28, 2020 by Dick Gates Sr.

John Sigh Jr.
Douglas Richardson's Royal Ancestry citations added and updated. Added Research Notes that Richardson's books contain an error (typo?) on the marriage date of Samuel Levis and Elizabeth Clator (aka Claytor). Is 4 May 1680 not 4 May 1684 as stated in Richardson.
posted Nov 12, 2019 by John Sigh Jr.