Captain Frederick Henry Meredith Lewes was born on 28th July 1887 and was married to Mrs A Lewes. They lived at 3 Oak Hill Road, Surbiton Hill, Surrey. The son of Col. H. A. Lewes and Lucy Julia Perfect Lewes of Rothsay, Camelsdale, Haslemere, Surrey, he was educated at Haileybury and was a civil engineer. He moved to Derby and worked in the Coaching Section of the Midland Railway. He was commissioned as a 2nd Lt in the Territorial Force on 11th April 1911. He had previously been in the Electrical Engineers, R.E. between 1905 and 1908 and the 4th North Midland Howitzer Brigade from 1908 to 1911. He contracted trench fever in September 1915 and rejoined the battalion on 29th November 1915. He died of wounds on 2nd July 1916. In spite of his body being buried by the Germans it was subsequently lost.” (p393 A Lack of Offensive Spirit? The 46th (North Midland) Division at Gommecourt By Alan MacDonald)

It appears from posts on the Great War Forum that Capt Lewes, and members of his unit were the only men of their Brigade to reach the German 3rd line, where they were cut off and never seen again. It is likely that they fought in that position until over run, hence the German burial of Lewes's body. 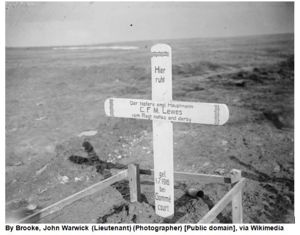