The Shadwell Testimonial Prize, founded in 1888 In memory of Admiral Sir Charles F. A. Shadwell, K.C.B., who died 1st March, 1888 will be known as the " Shadwell Testimonial," and will consist of a Pocket Sextant, or other instrument (as funds will admit) of use in Navigation or Marine Surveying.

It will be bestowed annually on the Officer of a rank not higher than Lieutenant-Commander, and who has never been classed as an Assistant Surveyor who has sent in through his Captain the most creditable plan of an anchorage or other marine survey, accompanied with sailing directions recently executed by himself. Officers of the Commonwealth Navies are eligible to receive this Prize.

In case of co-operation in the production of a plan, a junior Officer, who has assisted materially in its construction, may participate in the reward, should the funds be sufficient.

The first award was made on the plans received during 1899.
National Archives Shadwell Prize

Is Arthur Perfect Meredith your ancestor? Please don't go away!

ask our community of genealogists a question.
Sponsored Search by Ancestry.com
DNA
No known carriers of Arthur Perfect Meredith's DNA have taken a DNA test. 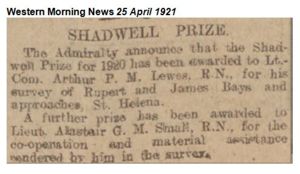