This speculation is based on the order in which Anne and her siblings are listed in her father's will. She is named sixth and may be Charles Lewis' fourth daughter. His two sons, Charles Lilburne and John Lewis, are mentioned first. Ahead of Anne is Elizabeth Lewis born in 1752. Following Anne is Frances Lewis, born January 24, 1759. If the girls are in age order in the will, Anne’s birth falls somewhere between 1752 and 1758.[2]

Some sources have recorded Anne's middle name as Jefferson, likely because she was named as "Anna" Jefferson in her father's 1782 will. No known document from her lifetime supports this.

Anne died sometime after February 8, 1799 (the last definite reference to her in family records); according to some cryptic references in Thomas Jefferson's memorandum books, she may have died in the fall of 1800.[4] Anne Lewis and Randolph Jefferson had five sons and one daughter.

ask our community of genealogists a question.
Sponsored Search by Ancestry.com
DNA Connections
It may be possible to confirm family relationships with Anne by comparing test results with other carriers of her mitochondrial DNA. However, there are no known mtDNA test-takers in her direct maternal line. It is likely that these autosomal DNA test-takers will share some percentage of DNA with Anne: 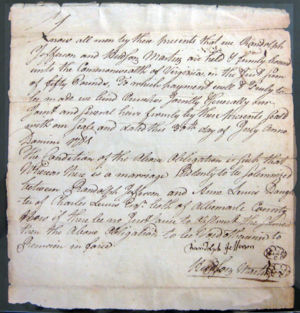