Charles Lewis as a Virginia colonist.

Colonel Charles Lewis of "The Byrd" plantation was the second son of John Lewis and Elizabeth Warner.[1] He was born at Chemokins[2] on October 13, 1696 (Abingdon Parish register) in Glocester County, Virginia.[citation needed] He married Mary Howell on May 28, 1717 in Goochland County, Virginia.[3] Mary was the daughter of John Howell. Charles took up the Byrd Plantation in 1733, was an officer in the French and Indian Wars, and a member of the Council.[citation needed]

To Wife Mary, all estate real and personal for life, at her death to:

To son Robert, land whereon I live know as "The Bird";

To sons Howell and Robert, 1st & 2nd choice of negroes;

On wife's death rest of the estate to be divided into 8 parts, one part each to children: John, Charles, Howell, Robert, Elizabeth Kennon, Ann Taylor, and Frances Lews, and an eighth part to children of my deceased son James

Attached profiles for children in need of sources to support who they belong to:

Sponsored Search by Ancestry.com
DNA Connections
It may be possible to confirm family relationships with Charles by comparing test results with other carriers of his Y-chromosome or his mother's mitochondrial DNA. However, there are no known yDNA or mtDNA test-takers in his direct paternal or maternal line. It is likely that these autosomal DNA test-takers will share some percentage of DNA with Charles: 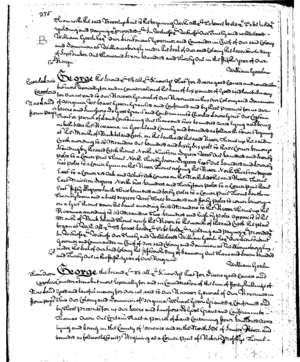 will of charles lewis 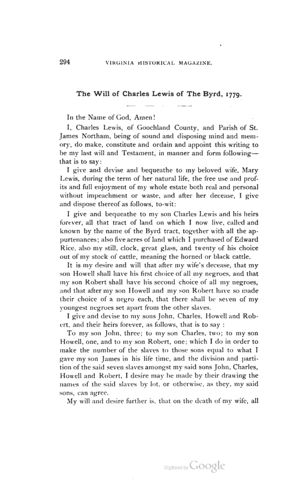 will of charles lewis page 2 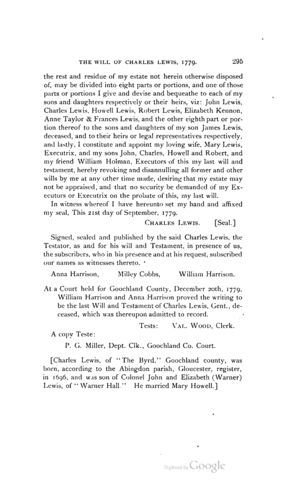 Wendy Browne
this profie Lewis-683 and profile Lewis-35853 are duplicates. can they be merged?
posted Nov 21, 2020 by Wendy Browne

Jillaine Smith
Thank you, Liz! I've changed the project box in the narrative; could you please use your Leader Powers to change the profile manager from Virginia to US Southern Colonies? Thanks!
posted Nov 13, 2020 by Jillaine Smith

Husband of Mary (Howell) Lewis  married 28 May 1717 in Goochland County, Virginiamap these mary howell are the same persons, there are my 6th great grandparents. I was unable to merge them, it said they were "rejected merges" Charles Lewis (of the Byrd Plantation) only had one wife that was Mary Howell

Mary (Weston) Jenkins
Would the managers of Lewis-22979 and Lewis-683 please compare notes and see if these profiles can be merged?

Mary (Weston) Jenkins
Would the managers of Lewis-22979 and Lewis-683 please compare notes and see if these profiles can be merged?

Mary (Weston) Jenkins
The profile managers may want to reconsider including the FAG memorial among their references. The FAG site has some problems with facts and it has included pictures that do not go with this Charles Lewis.
posted Feb 28, 2018 by Mary (Weston) Jenkins

What I found is that he now has a sister Mary born April 1696 in Pennsylvania.

I posted a note on her profile that she probably does not belong in the John Lewis family of Virginia.

Paula J
Thanks to Liz for all the work on this profile and getting it ready to merge!!
posted Jan 22, 2017 by Paula J

Liz (Noland) Shifflett
Lewis-683 and Lewis-20240 appear to represent the same person because: Hi! One of the sources for Charles had that his will was written 21 September - cited in Lewis-683. In my research, I saw that another had 1 Sep, but I didn't note the source at the time (dang). Lewis-20240 has "Died 1 Sep 1779 in The Byrd, Henrico, Colonial Virginia" - Goochland was created from Henrico in 1728, so I think we're talking about the same place (I haven't tracked down where The Byrd Plantation is actually located yet). From what I can tell, Charles' father was associated with Chemokins, which you have as birth location (and I think it is probably a homestead or a community in Gloucester County, but I haven't researched it yet either). Several sources cite the register for Abingdon Parish (Gloucester County) for his birth, but I have not seen the entry myself. The clencher that these are duplicate profiles is the daughter Anne attached to Lewis-20240 - Lewis-20239, married Edmund Taylor. Charles' will (abstract in Lewis-683 & link to full transcription) names daugther Ann Taylor & other sources (notably, DAR) show she married Edmund Taylor. Please merge. Thanks!
posted Jan 22, 2017 by Liz (Noland) Shifflett

Liz (Noland) Shifflett
I've added biography & links to this profile that should help us keep him straight. We still need to figure out the profiles attached as siblings (that's up next for me), but Charles is attached to the right parents/wife (well, pending merge/detachment or merge - should just be the one Mary Howell) & I'm working my way through the children.

However, problems with attached profiles for children/siblings doesn't impact whether or not Charles (1696-1779) has duplicate profiles that should be merged.

I'll send a note to Paula & ask her to delete her comment, but in the meantime, please merge duplicates for Charles - provided you're sure it's this Charles & there's no conflict with parents.

posted Jan 22, 2017 by Liz (Noland) Shifflett
Linda Lewis
this is my 5 times great grandfather how do I connect trees
posted Oct 05, 2014 by Linda Lewis

Please complete the merge with Lewis-683. Thanks, Vic