William was born in 1722. He was the son of [Lightfoot-245|Philip Lightfoot II]] and Mary (Armistead) Lightfoot.

William Lightfoot married Mildred Howell. He acted as one of the executors of his father's estate & inherited considerable property from his father, Philip. By terms of Philip's will William inherited property which included all of the lands in Charles City and Surry Counties except for one called "Troopers", the lots and appurtenances in York City where he was then living, except for those of his mother, warehouses, a mill, store houses & 1/3 of the plate once his mother died. He was also given 200 pounds to repair the house at Sandy Point (Tedington); & in the event that his two brothers, John and Armistead, died without male heirs, he was to inherit their lands as well. The home now called "Nightengale House", named for a subsequent owner, in Williamsburg passed to him upon the demise of his brother John.

He served as Sheriff of York County in 1746 & was a deligate to the House of Burgesses from 1756-58. His son, William, became the proprietor of "Tedington" upon the death of his father. 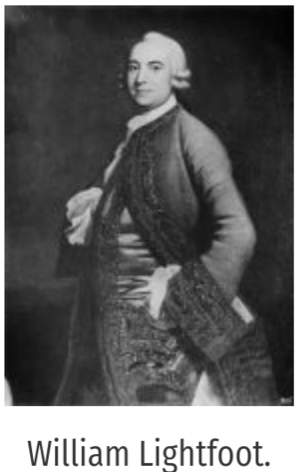 Duplicate found as part of http://www.wikitree.com/wiki/Project:Database_Errors
Proposer is a 'Data Doctor' and not related to the Profile/s