This person is an ancestor of President Abraham Lincoln. 16th US President

A son of Abraham and Bathsheba Lincoln, Thomas very probably did NOT have Herring as middle name. In 1998, Paul H. Verduin - then General Secretary of the Abraham Lincoln Institute of the Mid-Atlantic and a noted authority on President Lincoln's antecedents - pointed out two crucial items concerning Bathsheba Lincoln's maiden name. In a letter dated 13 October 1998, Verduin noted that : (1) the name Herring has not been found on any document relating to Bathsheba; and (2) the "tale was invented in 1908, some 140 years after her marriage to President Lincoln's grandfather, by the daughter of one of the co-authors of the highly flawed study of the Lincoln genealogy which appeared at that time". Verduin wrote further that the daughter "visited Rockingham County that summer and enticed a story from a couple of individuals named Chrisman. The tale had never been heard before [1908], and there's absolutely no evidence for it. I've searched high and low, but haven't found the answer - and it may well be that none is available from any extant records."[1]

Issue: Abraham Lincoln, President of the United States, an only son, who in 1854 was of Springfield, aged 45, and had three children, the eldest of whom was 11 years of age. His wife was born and raised in Kentucky. He was born 12 February 1809.

The ancestry of Abraham Lincoln's mother Nancy Hanks has always been somewhat of a mystery. For over a century, historians and genealogists have repeatedly made claims that they have finally solved the mystery of Lincoln's mother, and that everyone before them was wrong. They claim to be able to "prove the truth!" All of these theories regarding Nancy’s ancestry have been “documented” mainly through circumstantial evidence and oral traditions. There are very few primary documents remaining. The one thing that can be proven about Nancy’s origins is that no one can prove the truth, at least not yet.[3]

[The following information has been disproved, and its inclusion only adds confusion:]
"Nancy HANKS daughter of James Hanks (1760-1793) and Mary Shipley. James Hanks was the son of Joseph Hanks and Nancy Anna Lee (1728-1808). Nancy Anna Lee was the daughter of William Lee, Jr. (1704-1764) and Anne.
[Delete entire paragraph? What of the following discussions of various theories?]

A widely accepted premise, again unproven, is as follows. Joseph Hanks, who had a daughter Nancy, also had a son James who married Lucy Shipley and had a daughter named Nancy. Lucy was widowed at an early age and later married Henry Sparrow. [5] Lucy Shipley reportedly was in turn the youngest child of Robert Shipley and Sarah Rachel Dorcey. It is said that, after her husband James Hanks died, she and their daughter Nancy Hanks lived with his parents, Joseph Hanks and Ann Lee; further, that she moved with them to Kentucky and later married Henry Sparrow while Nancy went to live with her mother's sister and her husband [?] Berry.[6]

Baber presents various theories and traditions concerning the birth of Nancy Hanks in a number of different Virginia counties but proves none of them.[7]

Child's theory is that Lincoln's grandmother was Lucy Shipley who married James Hanks, a son of Joseph, and had a legitimate child, Nancy. However, that Joseph had a son James is purely circumstantial and is based on interaction between Lucy and the Shipley family. Child believes James died about 1785 making Lucy a young widow and accounting for the lack of records.[8]

Sponsored Search by Ancestry.com
DNA Connections
It may be possible to confirm family relationships with Thomas by comparing test results with other carriers of his Y-chromosome or his mother's mitochondrial DNA. However, there are no known yDNA or mtDNA test-takers in his direct paternal or maternal line. It is likely that these autosomal DNA test-takers will share some percentage (beta) of DNA with Thomas: 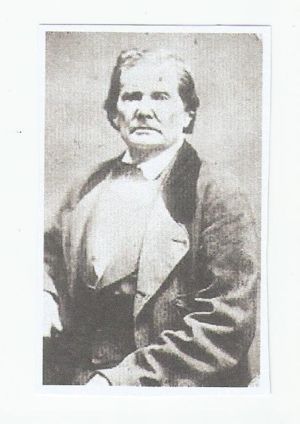 Court Document for an Estate Sale. 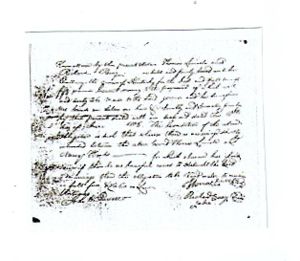 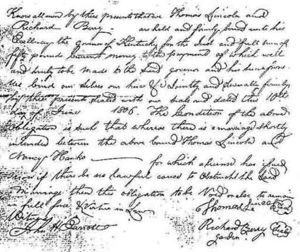 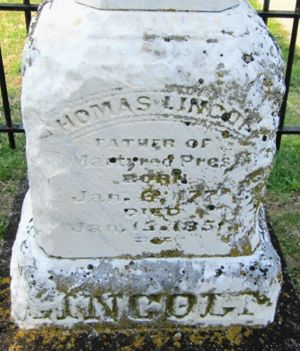 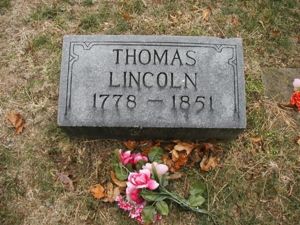 There is no documentation available, which affirms that the family name of Bathsheba was Herring .

Maggie N.
So what's with that middle name being HERRING ? I have never seen that anywhere but here (-:
posted Feb 20, 2014 by Maggie N.
[Living Lincoln]
Id just like to point out that Nancy Hanks was Thomas Lincoln's first cousin by marriage. her aunt mary Shipley married mordecia Lincoln and her mother Nancy Shipley married Joseph Hanks then Nancy hanks (named after her birth mother married Thomas source link is already provided P#54: http://archive.org/stream/historicalgeneal04stil#page/196/mode/1up makes for an interesting read it even gives her mothers parents names.
posted Dec 05, 2013 by [Living Lincoln]