This person is an ancestor of President Abraham Lincoln.

Mordecai "MORDEKE" Lincoln was the fourth son born to Samuel Lincoln, the second son that was named Mordecai. He had an older brother who was first given the name but who lived only a few weeks.[1][2][3][4]

Note: The English alphabet at that time included a character called a thorn, which looked very much like a letter "y" but in fact represented the "th" sound. Thus, the word that appears to be "ye" in fact was "the" (the body, the 28[th], the 71[st]).

Is Mordecai your ancestor? Please don't go away!

ask our community of genealogists a question.
Sponsored Search by Ancestry.com
DNA Connections
It may be possible to confirm family relationships with Mordecai by comparing test results with other carriers of his Y-chromosome or his mother's mitochondrial DNA. However, there are no known yDNA or mtDNA test-takers in his direct paternal or maternal line. It is likely that these autosomal DNA test-takers will share some percentage of DNA with Mordecai: 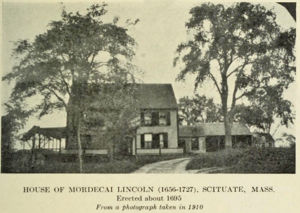 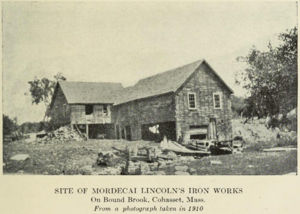 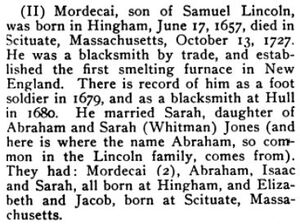 Leave a message for others who see this profile.
There are no comments yet.
Login to post a comment.
George F. Bentley Jr.
Note there are 2 "Lincoln-18" s.

Edited response: Hi Robin, Per your concern: Thanks. It was a bit weird, but I got Mordecai and Mordecai "Mordeke" to pop up and both showed Lincoln-18. Did it more than once.... That is why I posted it. Probably just a glitch... George

Robin Lee
I am not sure what you are trying to say. There is only one Lincoln-18, that is this profile. He does have a younger brother Mordecai that died before he was a month old. There are no duplicates of Lincoln-18 that I can find.
posted Mar 28, 2020 by Robin Lee

Dena (Ellis) Oneal
According to information from University Microfilms of Ann Arbor, Michigan, Mordecai forged the first iron made in America. He was a blacksmith.
posted Mar 07, 2015 by Dena (Ellis) Oneal
[Living Lincoln]
During the 1600's if 2 children were born with the same first name they were classified as the elder (first named) and the Younger ( second named) this was not uncommon.
posted Feb 02, 2013 by [Living Lincoln]