Please see: Disambiguation of Thomas Lincoln before making any changes to this profile.

Thomas, the "cooper", and also known as the "maltster," came from the west of England, says tradition, and settled in Hingham about 1635-6. His name, however, does not appear upon our records until 1636, when there was granted unto Thomas Lincoln, cooper five acres of land at the west end of town for a house-lot, butting on the town street eastward, and upon the common westward, and with the land of Francis Smith northward, and with the land of Thomas Nichols southward." This lot he afterwards sold or exchanged for one on North Street, near Beal Street, which was his homestead. He also had a small triangular lot of land granted him subsequent to the first distribution of lots in 1635, at what is now the corner of North and Lincoln Streets. This (the triangular lot) he afterwards gave with malt-house, etc., to his youngest son, Benjamin. [2]

His wife, whom he married in England about 1630, was Anis, or Avith lane, a daughter of William Lane. She died in Hingham Feb. 13 or 14, 1682/83. Hingham town records say: "Annis Lincoln dyed 14 February, 1682-83." David Hobart, son of Rev. Peter Hobart, recorded the event in his diary as follows: "February 13, 1683. The wife of Thomas Lincoln the cooper dyed." At the time the present meeting-house of the First Parish was erected (1680-81), Thomas Lincoln, cooper, was one of the five elderly gentlemen to whom was assigned a sitting "in the second seate under ye pulpit;" while for Mrs. Lincoln a place was allotted "in the second seate next ye pew." He died at his residence on North St., West Hing., 28 Sept. 1691.[2]

In his will, dated 13 July, 1688, proved 17 Oct. 1692, he mentions three sons and one daughter; son Joseph to have the home place. Joseph's son Nehemiah came next into possession, and having no issue he left it to his nephew Israel Lincoln. [2]

Children of Thomas Lincoln the Cooper, with his only wife Annis Lane were: 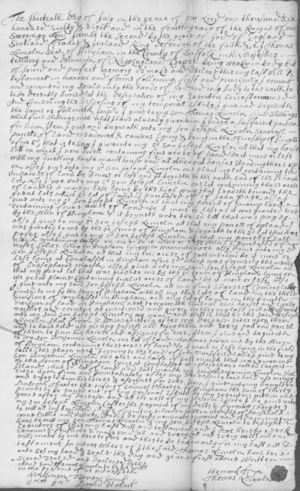 Vic Watt
I have tried to set up a simple comparison for people so they can choose the correct Thomas. I will also include the Profile number for each Thomas. Then we can move the bio information to the correct profile and include this comparison at the top of each. Does this work?
posted Oct 18, 2013 by Vic Watt

See the free link to that book, or buy it.

written by George Lincoln, originally published 1893. The New England History Press republished the material in 1982 and again in 1987. The book, while published without a copyright, should be ordered from your local bookstore if the information here is of interest to you. Ordering information: F The History of the Town of Hingham Massachusetts, The Genealogies Author: George Lincoln Pub: New England History Press Somersworth, New Hampshire 03878 ISBN: 0-89725-029-X Library of Congess Number: 82-80017