Carl Nilsson Linnæus in Råshult, Stenbrohult parish, was baptized May 19, 1707. Someone has later underlined this note and added: "This is the great, famed in the world, a glory to Sweden, Archiater and Knight Carl von Linné.[1] Carl's parents were Comminister (later Vicar) Nils Linnaeus in Stenbrohult parish (map) and Christina Brodersonia[2]

Carl von Linné systematized the scientific nomenclature of living things, and developed a hierarchical classification system (kingdoms, classes, orders, genera, and species). Although he was not the first to use the binomial nomenclature system (Latin genus and species names), his works popularized it in the scientific community. Scientists today widely use the hierarchical system (with many changes since Linnaeus), the binomial naming system, and many of the Latin names Linnaeus created for specific plants and animals.[3]

Carl was born as the first child and eldest son, in the night between the 12th and the 13th May 1707. He grew up in the garden of his father, since the father had built the most beautiful garden in the county, with chosen trees and the most precious flowers. Linné recounts a memory from the summer when he was four years old and followed his father to a picnic at Möcklanäs, where his father entertained the party by talking about the flowers around them, their names, and their various remarkable properties. The boy was entranced and would subsequently ask neverending questions.

Carl's first experiences with formal schooling were less inspiring. When he was seven he was given a tutor who was "not well suited to the bringing up of children". The schooling offered in Växjö, where next he went from 1722, was mostly geared towards preparing future priests - which was also the career projected for Carl by his parents. These subjects did not appeal to the talents of young Carl, with his naturalist mind. Linnaeus comments in the autobiography that it was easier in a class than alone with a tutor to avoid the studies that did not interest him. However, when his father came to Växjö to consult Carl's teachers in 1726, their advice was to take the lad out of school and have him apprenticed in a craft like tailor or shoemaker. The only voice against was the Medicus Johan Rothman, who, on the other hand, recognized in Carl a potential greater than in any of the other pupils. Rothman told his father that the young man would be well able to support himself as a doctor. He took Carl under his wing and introduced him to the proper botanical and medical literature of the time.[2]

Carl Linnaeus went to study botany and medicine, first in Lund and then in Uppsala. In May 1732 he set off on his journey to Lapland, reported in Iter Lapponicum[4] and Flora Lapponica.[5]

After his famous journey to Lapland, Carl visited the province of Dalarna on several occasions. His primary interest in this part of Sweden will have been mineralogy. Falun in Dalarna was where he met his future wife, Sara Lisa Moræa. Before Linnæus went on his Grand Tour to Holland and England in 1735 he asked for Sara Lisa's hand in marriage. Her father, the Medicus for Falun, recognized his qualities and gave his Yes. Sara Lisa's mother was less favourably inclined.[2][6]

By way of Hamburg Linnæus went to Amsterdam, where he presented his thesis on Malaria for a docoral degree in medicine and made friends with some of the most prominent scientists of the time. He found sponsors who helped him publish his Systema Naturæ, brought along from Sweden in manuscript.[7]

Linnæus came back to Sweden in June 1738. First banns were read for Medicus Doctor Carl Linnæus and Sara Elisabet Moræa, the daughter of Medicus Johan Moræus in Falun, second day of Whitsuntide 1739.[8] They were married two weeks later.

Linnaeus was knighted by the king in 1757 and introduced in the House of Nobles in 1761. His name as a nobleman became Carl von Linné.

Linnaeus's best known works are two massive catalogs of plants and animals. He published Species Plantarum in 1753. The book's two volumes ran to 1,200 pages and included over 7,300 species. In 1758 he published Systema Naturae, which classified 4,400 species of animals and 7,700 species of plants. 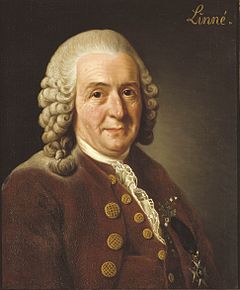 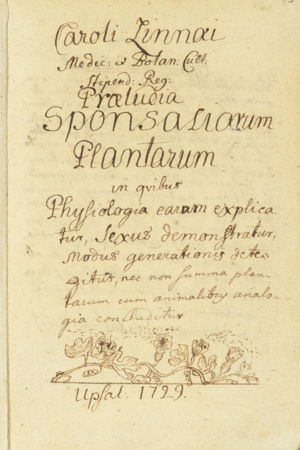 Elizabeth Hargrave
Apparently the keeper of the University of Uppsala website on Linnaeus has a whole database of Linnaeus descendants. I wonder if we could get him to bring some of that data over to WikiTree? Article here: http://hd.se/familj/slaktforskning/2013/01/29/slaktforeningen-som-varnar-om-kunskapen/ (I opened it in Chrome and used Google translate to read it)
posted Sep 10, 2014 by Elizabeth Hargrave