Franz Liszt "was a Hungarian composer, virtuoso pianist, conductor, music teacher, arranger, and organist of the Romantic era. He is widely regarded as one of the greatest pianists of all time.[1] He was also a writer, philanthropist, Hungarian nationalist, and Franciscan tertiary."[2]

"A prolific composer, Liszt was one of the most prominent representatives of the New German School (German: Neudeutsche Schule). He left behind an extensive and diverse body of work which influenced his forward-looking contemporaries and anticipated 20th-century ideas and trends. Among Liszt's musical contributions were the symphonic poem, developing thematic transformation as part of his experiments in musical form, and radical innovations in harmony."[4]

He was born 22 October 1811 in the village of Doborjan in Sopron County, in the Kingdom of Hungary, Austrian Empire, the son of Adam List and Maria Anna Lager. His father, Adam, was an accomplished musician, and Liszt became his father's pupil. Later, he received additional training in Vienna.

Death of Abbe Liszt, the greatest of pianists, died Saturday in the little Bavarian town of Baireuth, where he has been the principal guest and lion during the Wagner festival now in progress there.

Franz Liszt would have been 75 years old had he lived until October 11. He was born in Raiding, Hungary, and manifested an aptitude for music when he was six years old, so that his father, a musician of some note, began instructing him on the piano. He was so brilliant a performer in his ninth year that several Hungarian noblemen took in charge his education, and he was taught at Vienna by Czerny and Salieri. His education proceeded at Paris, and when he was 13 years old his great career as a pianist was fairly opened by tours in France, Germany and England.

The death of his father in 1827 threw the young Liszt into a state of profound mental depression, and this, combined with a precocious love affair, determined him to religion and for some years his art was forgotten. But making acquaintance with the most interesting society of Paris, he was drawn from his seclusion by the dazzling career of Paganini, resumed his practice on the piano-forte, and when Thalberg appeared in 1835 he sprang forth as his rival, and both the Thalberg-Liszt fever possessed Paris, both arousing high enthusiasm, but Liszt at last eclipsing Thalberg.

Thenceforth his life was one unbroken course of triumph, without a competitor, all other pianists frankly confessing their inability to approach the versatility and excellence of his performance, for all music, whether of Beethoven, Chopin, Lehmann or his own brilliant compositions, was interpreted with equal skill of technique and beauty of power of expression. He was a favorite of courts, nobles and people, and wealth flowed in upon him, with which he was always generous. He often gave concerts for public objects and the Beethoven monument at Bonn was his gift.

In 1848 the duke of Weimar made his director of music at the court and opera, and that city became a musical center, and Liszt the patron and teacher of many musicians, including Wagner, Rubinstein, Von Bulow, and the American Wm. Mason. Here he wrote his "Faust" symphony, with choruses; his oratories, "Saint Elizabeth" and "Christus." his "Tasso," and other of the "symphonic poems," which was his special gift to musical forms, and is often cited as the exemplar of "program music."

Liszt, when a young man entered into intimate relations with the celebrated "Daniel Stern" (the Countess d'Agoult), and they had two daughters, one of whom became wife of Emile Oilivier, the other the wife of Von Bulow, whom she afterward left for Wagner. Long after, the escape from an infatuated woman, he went to Rome, and was made an abbe by Pope Pius IX, whose friendship for him was warm and lasting.

He was written a life of Chopin, a rhapsodic production of no value; a work on "Gypsies and their Music," a text book on "The Theory and Practice of Music," in three volumes, and other works; besides being the composer of several hundred pieces, including masses, oratorios, symphonic poems, fantasies, "Hungarian rhapsodies," arrangements of songs and compositions of other musicians. He was had a life of the most unbroken popularity and success, worshiped particularly by women, and during his recent visit to London he reproduced, with even greater intensity, the sensation he produced in his prime.

Bayreuth, Aug. 1--The remains of Abbe Liszt, at his own desire, will be buried in the cemetery here. The funeral will take place on Tuesday.

The presidency, directorate, and teaching staff of the Hungarian Royal National Academy of Music announces with deeply saddened heart that its esteemed, beloved and unforgettable president

passed away on 31st July of the current year, in the 75th year of his meritorious life, in Bayreuth at 11:15 at night.
The dear deceased's earthly remains will be laid to eternal rest in Bayreuth on the afternoon of 3rd August of the current year.
Dated in Budapest, 1st August 1886.
Blessings and peace over his ashes!

Is Ferenc your ancestor? Please don't go away!

ask our community of genealogists a question.
Sponsored Search by Ancestry.com
DNA
No known carriers of Ferenc's DNA have taken a DNA test. 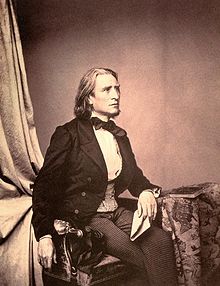 Leave a message for others who see this profile.
There are no comments yet.
Login to post a comment.
Dan Sparkman
Among the many reasons Ferenc Liszt deserves to be honored is for his support of August von Fallersleben and his family during their stay in Weimar in the 1860's. Von Fallersleben was a scholar, composer, author, and German patriot, whom, for his unwavering support of German unification during a period of petty miniscule German states, was hounded out of 39 different cities by the police! Without Ferenc Liszt's support, von Fallersleben and his family would have starved.

Von Fallersleben collected many German folk tales and folk songs, wrote commentaries on his friends' the Brothers Grimm's works, and perhaps is most famous as the author of the song "Die Gedanken Sind Frei" ("Thoughts Are Free"), which has been translated into English by Pete Seeger, and also von Fallersleben is the author of the German national anthem, for which Ferenc Liszt wrote the music. Liszt also wrote the music for "the A.B,C, song" whose real title I do not know, but whose music and words every American schoolchild knows. I am also very happy to have ANY connection to Ferenc Liszt for these reasons.

We plan on featuring Franz as the Example Profile of the Week in the Connection finder on September 16th. Between now and then is a good time to take a look at the sources and biography to see if there are updates and improvements that need made, especially those that will bring it up to WikiTree Style Guide standards. A Team member will check on the profile closer to the week we'll feature it and make changes as necessary.