"Sho-go-nik-kaw (Little Hill) is not an hereditary chief; but some fifteen years ago [1838] was put at the head of a small party that collected in the neighborhood of the school. By energy and good management he has acquired an influence equal to that of any of the hereditary chiefs, and has now the largest band in the tribe. His mother was a Menomonie, and his father half Winnebago and half Sioux, consequently he is but one fourth Winnebago. In person he is below the medium height, but strongly built and very athletic. He is now about forty years old, is an industrious man, has been a very successful hunter, but has lately turned his attention chiefly to farming, and has done more than any other chief to advance the civilization of the tribe.

Warm-hearted, generous and brave, Sho-go-nik-kaw is the idol of his friends; intelligent, shrewd, ambitious, crafty in design and bold in execution, he is one of the leading spirits of the tribe; raised from the common ranks of the people to his present position, he understands thoroughly the elements of public sentiment, on which he relies to sustain himself, and while he would be considered as the fountain and guide of public sentiment, he is generally content to be its organ, and is careful not to deviate far from its clearly indicated path. Sometimes, inspired by a noble impulse, he will fearlessly advocate and sustain justice and right against any odds, regardless of opposition or consequences; anon he will be found playing the demagogue, and pandering to the worst passions and prejudices of the mob. Ardent in his temperament, he has more energy than Firmness, and is guided more by impulse than by principle. As an orator, he is bold and fluent in style, rapid in utterance, and energetic but not graceful in manner. He has twice visited his Great Father at Washington as a delegate from his tribe, and was speaker for the delegation in negotiating the treaty of 1846, in which negotiation he displayed talents highly creditable as a diplomatist. Sho-go-nik-kaw has uniformly been an advocate and patron of the school established in his tribe; from which school his band have received great assistance in the support of their children. In his religious belief he adheres to the traditions of his fathers, although he occasionally attends divine service with the Protestants, and considers himself an honorary member of the Roman Catholic Church. In his domestic arrangements, he approximates nearer to the usages of civilized life than any family in the tribe, the credit of which is, in a great measure, due to his amiable, excellent, and virtuous wife." (Schoolcraft, 234)

Is Šoǧogᵋnįka your ancestor? Please don't go away!

ask our community of genealogists a question.
Sponsored Search by Ancestry.com
DNA
No known carriers of Šoǧogᵋnįka's DNA have taken a DNA test. 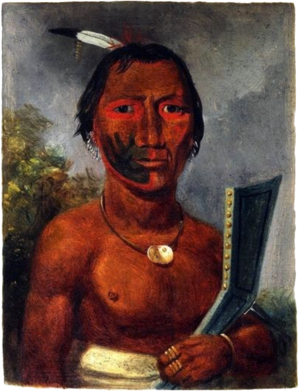 Little Hill, by R. A. Lewis 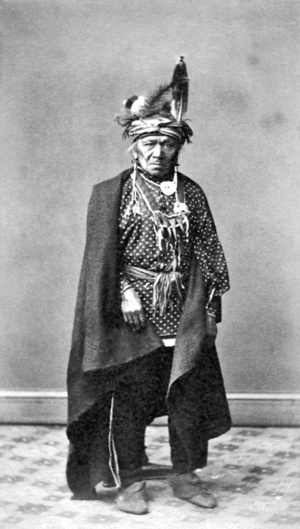 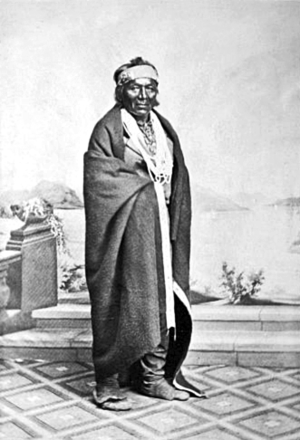