The name Hųgᵋxų́nųga is from Hųk-xų́nų-ga, where hųk can be translated as "chief, priest, prophet"; and xų́nų as "young, little." These may be recombined to give many different permutations of his name, the two most common being "Little Priest" and "Young Prophet."

Hųgᵋxų́nųga was born in 1829 in a village on the shore of Lake Koshkonong in Wisconsin, which at the time was part of Michigan Territory. He was the son of the elder Hųgᵋxų́nųga (Little Priest). They were members of the Bear Clan, probably the Blue (Gray) Bear Subclan, since the younger Little Priest was blessed with Grizzly Bear powers. The Grizzly Bear Spirit is the patron of the Blue Bear Subclan. The Blue Bear Subclan are the priests of the Bear Clan, so it is not surprising that Little Priest was brought up as a priest. However, the Bear Clan are the mą́ną́pe, "soldiers," who function in peace as the police, but have special functions in war. Consequently, it is also not surprising that in the 1840s Little Priest became a War Chief.

The historian Tim Smith has an excellent succinct account of the life of Little Priest which will be quoted here. "Little Priest, the son of Little Priest. He was born in 1829 at Lake Kosh Ronona, Wisconsin and trained as a medicine man. At the age of fifteen, he was made war chief, after his accomplishments against the Lake Superior Chippewas. In order to help his people, he fought against the German settlers during the 1863 Santee [Dakota] outbreak. When the Winnebago were shipped down the Mississippi and up the Missouri Rivers, he ordered John Omaha and Little Hog to fall off the boat and to swim to the Omaha at the Blackbird Bend and open up negotiations with them about acquiring some land in the northern part of their territory. At that time in 1863, the Lakota bands were making hit and run attacks all along the northern and western border of Omaha Territory until the Omaha were forced to move south. The attacks became worse as the months passed on. The Omaha agreed to sell the northern part of their reservation to the Winnebago in 1863. The Omaha Chiefs made an agreement with John Omaha and Little Hog and signed their agreement on a beaded wampum belt. Some of our old beadwork has the agreement on them, if one knows where to look. As a researcher I am experienced in this. In 1864, Little Priest traveled to the Omaha Reservation and agreed to the agreement. With him was one of the principal Chiefs, Little Hill. In 1863, General Sully made an agreement with Little Priest. If the War Chief helped him against the Western Sioux, then he would use his influence to help relocate the Winnebago to Nebraska. Little Priest knew it was wrong to fight against his own brothers, but in order to save his people he joined General Alfred Sully. He fought from 1863-66 with the United States Army against the Lakota Bands, Northern Cheyenne, Northern Arapahoe and the Santee Dakota Bands. Little Priest was finally wounded outside of Deer Creek Fort in Wyoming by a band of Oglala Lakota and some Northern Cheyenne warriors. That was in April of 1866. He was shot four times, one in the lung." (Smith, 1, 6)

Here is a list of the wives and children of Little Priest (quoted, with punctuation adjustments, from Linda W.):

Child of Little Priest: Edward Wawahaskah Priest (1856-1892).
“Mrs Beaver was previously the wife of Jos. Armell by whom she had one son & dau. (Baptist John Armel, enrolled with A.L., 20 yrs. and Mary Armell, He nu kaw, married to John Johnson, enrolled Jos. Johnson, 19 yrs.) Mrs. Little Beaver was first married to Little Priest by whom she had one son Ed Priest, Wa-wa-ha-ska (or Driving Off).” [Alice Fletcher enrollment pages]

Other husbands: Peter Brown (whose children were named Jennie and Paul Priest),
Charles English and
an unknown man (whose child was named William Priest).

"He returned to the newly bought Winnebago Reservation and died on September 12, 1866." (Smith, 6) "Little Priest was buried on September 13, 1866 and his remains were placed in a small mound in the Timbers, 3 miles west of the Missouri River." (D. L. Smith, 7)

"The Winnebago Nation of Nebraska has the oldest Memorial Celebration in the United States. It was started in July of 1866, in honor of the Last War Chief that our tribe had, Little Priest, the son of Little Priest. ... The same year that Chief Grey Wolf asked the council of fourteen village leaders to honor his brother with a celebration for his death in the Sioux Wars and to honor the surviving members of the Company A, Omaha Scouts of the Nebraska Volunteers. Robert Fumas signed his name to the paper authorizing the celebration of the Powwow. So this is a fact that the Winnebago, Ho-Chunks do have the oldest Memorial Celebration." (Smith, 6)

One of the things that Little Priest said before he died was, "Be strong and educate my children," which is now the mission statement of Little Priest Tribal College, located in Winnebago, Nebraska, and dedicated to the memory of the last War Chief of the Hochunk Nation, Little Priest.

Is Hųgᵋxų́nųga your ancestor? Please don't go away!

ask our community of genealogists a question.
Sponsored Search by Ancestry.com
DNA
No known carriers of Hųgᵋxų́nųga's DNA have taken a DNA test.

Images: 1
Little Priest and Henry Decorah of Co. A of the Omaha Scouts 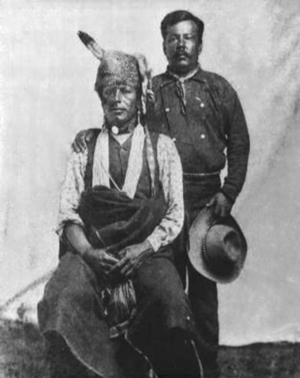