"Little Prophet," "Little Priest," and "Little Chief," are all common translations of Hųgᵋxųnųga, where strictly speaking, the initial hųk denotes a chief. The -xųnų- element can mean either "little" or "younger." He also had the clan name Mórajega ("Travels the Earth"), as well as the names Mącosepga ("Black Grizzly") and Rohąt’ehiga ("Kills Many"). He was known to have been of the Bear Clan.

In a speech on the Winnebago Prophet, Congressman, and Minister to France, Elihu B. Washburne said, "Little Priest was one of the most reputable of all the chiefs, able, discreet, wise, and moderate, and always sincerely friendly to the whites." (Indian Honor) When the Black Hawk War broke out, Col. Gratiot, who was the Winnebago Agent, was ordered by the Army to seek out the Winnebago Prophet in his village at Prophetstown, and to dissuade him from entering the fray. In this endeavor he was accompanied by Little Priest, Broken Shoulder, Whirling Thunder, White Crow, and Little Medicine Man. When they landed at Prophetstown, they were surrounded by hostile men intent upon killing them, but the Winnebago Prophet intervened and gave them his protection. After giving them his personal hospitality for three days, he warned them that his young men were intent upon killing the lot of them, and that they must make a dash for their canoes and make good their escape. This they did, and they were vigorously pursued, but Little Priest and his friends proved stronger, and escaped to Rock Island. (Bent, 524)

Is Hųgᵋxų́nųga your ancestor? Please don't go away!

ask our community of genealogists a question.
Sponsored Search by Ancestry.com
DNA
No known carriers of Hųgᵋxų́nųga's DNA have taken a DNA test.

Little Priest (the Elder), by R. A. Lewis 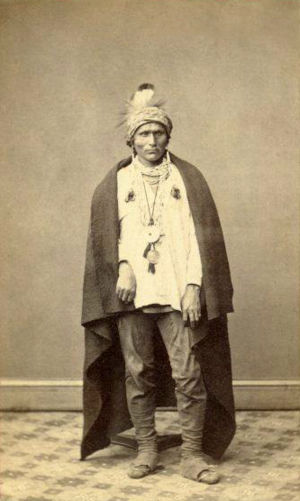