This is the main profile for Heinrich I (Henry the Fowler). Merge duplicates into this one.

Heinrich I "the Fowler"

"Heinrich der Vogler, German king and founder of the Saxon dynasty (918-1024) who strengthened the East Frankish, or German, army, encouraged the growth of towns, brought Lotharingia (Lorraine) back under German control (925), and secured German borders against pagan incursions.

The son of Otto the Illustrious, the Liudolfing duke of Saxony, Henry became duke at his father's death (912). His first marriage, to Hatheburg, daughter of Erwin, count of Merseburg, was declared invalid because she had become a nun after her first husband's death. He married Matilda, daughter of Dietrich, count of Westphalia, in 909; their eldest son would rule as the Holy Roman emperor Otto I the Great (936-973).

Although at war (912-915) with Conrad I of Franconia (German king, 903-918) over title to lands in Thuringia, Henry received Conrad's deathbed designation as heir to the throne. He was elected king of Germany (May 919) by nobles of Saxony and Franconia, two of the four most influential duchies; the other two important duchies, Swabia and Bavaria, did not recognize him as king.

Henry considered Germany a confederation of duchies rather than a nation. Having complete authority in Saxony and nominal sovereignty in Franconia, he sought to bring the duchies of Swabia and Bavaria into the confederation. After forcing the submission of Burchard, duke of Swabia (919), he allowed the duke to retain control over the civil administration of the duchy. On the basis of an election by Bavarian and East Frankish nobles (919), Arnulf, duke of Bavaria, also claimed the German throne. In 921, after two military campaigns, the king forced Arnulf to submit and relinquish his claim to the throne, though the duke retained complete internal control of Bavaria.

Henry defeated Giselbert, king of Lotharingia, in 925, and that region, which had become independent of Germany in 910, was brought back under German control. Giselbert, who was recognized as duke of Lotharingia, married the king's daughter Gerberga in 928.

When the Magyars, barbarian warriors from Hungary, invaded Germany in 924, Henry agreed to pay tribute to them and return a captured Magyar chief in exchange for a nine-year (924-933) cession of raids on German territory. During these years the king built fortified towns and trained the cavalry force he used to defeat various Slavic tribes; he conquered the Havelli at Brandenburg and the Daleminzi at Meissen in 928 and suppressed a rebellion in Bohemia in 929. The king refused to pay more tribute when the nine-year truce ended in 933. He used his seasoned cavalry to destroy the Magyars, who had resumed their raids, at Riade on March 15, 933, and ended their threat to the German countryside. The king's last campaign, an invasion of Denmark (934), added the territory of Schleswig to the German state.

The story that Henry received the surname Fowler because he was laying bird snares when informed of his election as king is probably a myth." 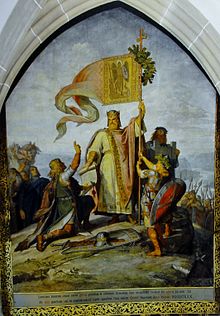 Henry "The Fowler" and Matilda of Ringelheim 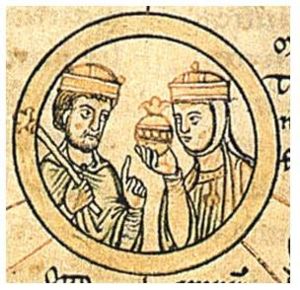