William Livingston is a member of Clan Livingstone.

William Livingston was a member of aristocracy in Scotland.

From The Livingstons of Callendar, etc by Edwin Brockholst Livingston 1920: That Sir William Livingston was a personage of considerable importance is shown by the fact that in August 1340 he was one of the five noble Scottish hostages for the Regent Moray, son of the famous Randolph, when the regent was released on his parole in that year. These hostages included Patrick Dunbar, Earl of March, and Sir Alexander Seton. Sir William also in the summer of the following year, at the head of ten horsemen, escorted Moray back to his English prison on the termination of his parole. Four years later July 10, 1345 he recived from King David II, as a reward for his loayal services, a charter of the lands of Callendar in Stirlingshire, then in the king's hands through the forfeiture of Patrick de Callendar, who had been actively employed in the English interest. These lands had been previously granted by Patrick de Callendar to a Henry of Douglas, but this transaction had naturally not recieved the royal confirmation. The better to strengthen his title to these lands, at a time when estates were constantly changing hands at every turn of the tide in the struggle between England and Scotland, Sir William deemed it prudent to marry Patrick's only daughter and heiress, Christian de Callendar. ---

Sir Willliam Livingston, founder of the house of Callendar was Sheriff of Haddington in 1339; June 1344 Sir William was a member of the parliament which was held at Scone in that month. He was also a member of Assize appointed by that parliament to try Malise, Earl of Strathearn, for felony and treason.

Additional Note: He was at the siege of Stirling by the Steward of Scotland in 1341, the Chamberlain's account for 1342 showing that 160 merks were sent to him during the siege, doubtless for the subsistence of the men under him. During the period of the same account (22 May 1341 to 11 June 1342) he went abroad on the business of the kingdom, and was paid a sum of £6, 13s 4d for loss sustained by him in his equipment for the journey. One of the hostages for the payment of the King's ransom of 100,000 merks was Patrick, son and heir of Sir William Livingston, he having apparently been substituted for his younger brother William. A most unfortunate substitution for the son and heir, as he never lived to return to his native country. The latest mention of Patrick is contained in a "Memorandum of the Delivery of the Hostages for King David's Ransom,' which read: "Item Patrik filz et heire a monsire William de Leiuyngstone est delivre a Richard Snel, bourgois de Barewyk (Berwick-on-Tweed), et que le roy David a promis par promesse de sa bouche, et une lettre plackette de son signet quil sera bien garde et ne eslongera.' LEARN MORE: The Scots Peerage V:423-424]

Sir William was deceased between the 17th of Oct. 1362 and the 30th of Nov. 1364, on which latter date the rools of the Exchequer contain particulars of a payment made to his son William, by order of King David, towards defraying the expense of his father's funeral. The junior William was evidently acting as executor to his father's estate, an office which was often performed by younger sons in those days.

The Livingstons of Callendar, and in all probability their predecessors, buried their dead within the south aisle of the Old Kirk of Falkirk and their family tomb was marked by four grit-stone statues, representing two knights and their ladies, two of which lay within and two without the church.

Sir William supported the House of Bruce, and he accompanied King David II on his ill-fated invasion of England in 1346. Following the Scottish defeat at the battle of Neville’s Cross on October 17, 1346, King David along with many of his followers, including Sir William Livingston, were taken prisoner. Sir William being a prisoner of note was committed to the special care of the Archbishop of York, who was made personally responsible for his safekeeping by a royal warrant, signed at Reading Feb. 14, 1346-47. He was soon released at the request of his captive king, who valued his services so highly that he wanted Sir William appointed a member of the Scottish Commission, in whose hands were entrusted the negotiations with the English government as to the Scottish King's ransom, and the ratification of a Treaty of Peace between the two countries. It was in connection with these negotiations that he received a safe-conduct from King Edward the Third of England, dated Dec. 7, 1347, in which he is styled Willelmus de Levyngstoun bannerettus. In a list of hostages embodied in the preliminary articles of the treaty, the eighth name is William, son of Sir William Livingston of Callendar. These wearisome negotiations extended over a period of ten years, so that as one of the Scottish Commissioners, Sir William had to make several journeys to visit his captive king, and must therefore have felt quite at home in the Tower of London. It was not until Oct. 1357, eleven years after the battle of Neville's Cross, that the treaty settling the terms of the ransom of David de Bruys, the King's prisoner, and his release from the Tower was finally agreed to and ratified. Sir William's armorial seal is attached to the treaty, as well as to the ratification of the same, and both of these records are still carefully preserved in the Public Record Office, London.

From papal letters of this period we learn that the presentation to the church of Restalrig, South Leith, was at this date in the gift of Sir William de Livingston, and that in July 1358 Pope Innocent VI granted an indult to him and Cristina his wife, of the diocese of Glasgow, to choose a confessor, who shall give them, being permitted, plenary remission at the hour of death, with the usual safeguards.

Died between the 17th of Oct. 1362 and the 30th of Nov. 1364, on which latter date the rools of the Exchequer contain particulars of a payment made to his son William, by order of King David, towards defraying the expense of his father's funeral. The junior William was evidently acting as executor to his father's estate, an office which was often performed by younger sons in those days.

AKA LORD OF CRAIGMILLAR AND DRUMRY


William de Livingston (son of William de Livingston and Margaret) died Bef. 30 November 1364. Sir William Livingston of Callendar accompanied King David II on his expedition to England in 1346 and acquired the Barony of Calendar, Stirlingshire, and whose heiress he married. Military service: 1341, Seige of Stirling Castle (under Sir William Douglas, Knight of Liddesdale). Title (Facts Pg): Knight Banneret. --- William LIVINGSTON was born ABT 1290 in Drumry, Dumbartonshire, Scotland, and died 30 NOV 1364 in Callendar House, Stirling, Stirlingshire, Scotland. He was the son of 2. William LIVINGSTON and 3. Margaret (Agnes) ERSKINE. He married Christian CALENDAR, daughter of Patrick CALENDAR. She was born ABT 1300 in Callendar House, Stirling, Stirlingshire, Scotland. Her father Patrick de Callendar was given the lands of Callendar by King David II; William de Livingston obtained Callendar (firmed up his claim to these lands by marrying Christian de Callendar, the daughter of Sir Patrick de Callendar. Patrick had been stripped of the lands of Callendar by King Robert the Bruce because he had supported the politically wrong side. William was granted the lands by Robert's son, King David II. William died prior to December 1, 1364. --- Father William Livingston, Lord Drumry d. a 1328 Mother Margaret Erskine Charts Pedigree Chart of James Irvine Sir William Livingston, Sheriff of Haddington was born at of Callendar, Stirling, Scotland. He married Christian de Callendar, daughter of Patrick de Callendar. Sir William Livingston, Sheriff of Haddington died in 1364. Family Christian de Callendar Child Sir John Livingston+ d. 1402 Citations [S7363] Unknown author, Wallop Family, p. 494. --- MILITARY: Battles and Wars Present at the siege of Stirling 1341; battle of Neville’s Cross 1346. MILITARY: Imprisoned Taken prisoner at the battle of Neville’s Cross; released shortly afterwards. OFFICE: Sheriff of Haddington 1339; Sheriff of Lanark 1358-1359. OFFICE: Commissioner to negotiate for the ransom of King David. ASSIGNMENTS: Scottish hostage sent to England as security for Randolph, Earl of Moray 1340. HONORS: Knighted. PROPERTY: Obtained a grant of the barony of Callendar, Stirlingshire, Scotland 1345/1346; PROPERTY: Obtained from the King a charter of the lands of Kilsyth 1362. TRAVELS: Went abroad on the business of the kingdom 1342-1343; had a safe-conduct to travel to London 1347. PUNISHMENT: Imprisoned Imprisoned in England; released shortly afterwards.

Sir William Livingston of Callendar accompanied King David II on his expedition to England in 1346 and acquired the Barony of Calendar, Stirlingshire, and whose heiress he married.

The next laird, their son William, was to marry Christian of Callander and inherited the barony of Callander by his father-in-law's forfeiture in 1345. Appointed in 1402 as guardian of his nephew Alexander.

UNCONFIRMED ANCESTOR. DISCREPANCIES ABOUT PARENTAGE, DATES OR BIRTH OR DEATH, or other criteria make this identity possible – only.

Notes for William de Livingston: Sir William de Livingston of Gorgyn, Crainmillar and Drumry, was a firm adherent of the House of Bruce, and fought against the English at Halidon Hill, July 19th, 1333 Died: 1339 Married: Margaret, whose surname unfortunately is not on record; she may have been a daughter of Sir Fergus Comyn, Lord of Gorgyn, circa 1260. Other family researchers say she was Margaret (Agnes) Erskine, daughter of John Erskine of Erskine, Renfrewshire, Scotland. Edwin Brockholst Livingston says in his publication of 1920 called The Livingstons of Callendar, etc, the following: It is unfortunate that the Newbottle charter of William Livingston in 1338 does not give his wife's surname, as the author would not be at all surprised to discover that she was descended from royalty. She may have been the daughter of Sir Fergus Comyn, Lord of Gorgyn, her husband's predecessor in the ownership of these lands, as her son Sir William de Livingston, the founder of the Callendar line, and his descendants as well as the descendants of her elder son, John of Drumry, had the right to bear the royal tressure of Scotland in their paternal coat-of-arms, which tressure was not borne by the Livingstons of that ilk, nor by any other of their cadets than Drumry and Callendar.

Sir William de Livingston and Margaret had the following children:

John Livingston (died 1366) married a daughter of Wemyss of Wemyss and was the founder of the Livingstons of Drumry and East Wemyss, but the line became extinct when Sir Robert Livingston was slain at the Battle of Flodden Field on September 9, 1513. More in this family: [2]

Generation Two Died: 1339 ? Married: Margaret, whose surname unfortunately is not on record; she may have been a daughter of Sir Fergus Comyn, Lord of Gorgyn, circa 1260. ? Sir William de Livingston and Margaret had the following children: ? John Livingston (died 1366) married a daughter of Wemyss of Wemyss and was the founder of the Livingstons of Drumry and East Wemyss, but the line became extinct when Sir Robert Livingston was slain at the Battle of Flodden Field on September 9, 1513. ? Sir William Livingston of Callendar

Shield of Livingston of Callendar 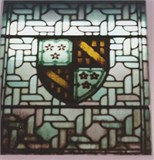 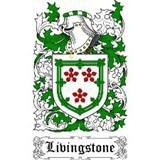 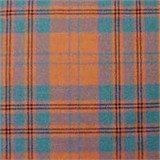 Leave a message for others who see this profile.
There are no comments yet.
Login to post a comment.
[Living Gibson]
Hello :) I have just been researching the Livingston tree and found your entry. Is it okay if I copy this information to my tree in Ancestry?