David Livingstone was born in Scotland.

David Livingston [1]was a medical missionary with the London Missionary Society and an explorer in Africa.H. M. Stanley is remembered for his meeting with David Livingstone on 10 November 1871 where he said "Dr. Livingstone,I presume? 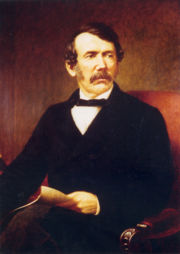 In 2003 a [2] DNA project was established to compare the Y-DNA of males bearing the different variations of the surnames Livingstone and MacLea. The project aims to find a blood link between the so-called Highland Livingstones and the Lowland Livingstons, and to investigate the various origins of these surnames.Many male lines have been identified, including those of Dr David Livingstone, a clan member, and the chiefly line of Barons of Bachuil.

David Livingstone lived in [3]Hamilton, South Lanarkshire from 1862 for a short time the house still stands and has a plaque that can be seen outside the house at 17 Burnbank Road, he was also awarded the freedom of the town of Hamilton.

David Livingstone was born on 19 March 1813 in Blantyre,his parents were Neil Livingstone and Agnes née Hunter.David worked at the cotton mill of H. Monteith & Co. in Blantyre Works from the age of 10. His brother John also worked there .They both worked to surport their family.David was taught to read and write by his father, he also went to school in the evenings which the company provided , he taught himself Latin and developed a love of natural history.

He was a student at the Charing Cross Hospital Medical School from 1838-40.At the end of the year he qualified as a Licentiate of the Faculty of Physicians and Surgeons of Glasgow.He was also ordained a missionary by the London Missionary Society.In December [4]he left for for South Africa to the mission station at Kuruman as a missionary doctor.

The Kolobeng Mission had to be closed because of drought,so [5] David Livingstone started exploring the middle of Africa, from 1852–56.He was the first European to see the Mosi-oa-Tunya "the smoke that thunders" waterfall which he renamed Victoria Falls Victoria Falls after Queen Victoria, of which he wrote later, Scenes so lovely must have been gazed upon by angels in their flight.

David Livingstone, was one of the first Westerners to make a journey across Africa, Luanda on the Atlantic to Quelimane on the Indian Ocean near the mouth of the Zambezi, in 1854–56 many Europeans attempted this crossing , but the threat of malaria, dysentery and sleeping sickness stopped them. 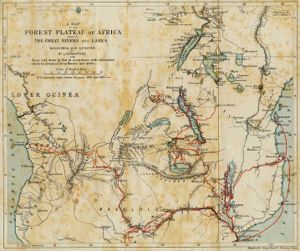 Map of livingstone travels in africa

David Livingstone explored the interior of central and southern Africa,he wanted to spread Christianity and bring civilisation to these regions of Africa. His later missions were more about exploring, firstly of the Zambesi and its tributaries, and later to find the source of the Nile during this time he returned to Britain twice, in 1856 and in 1864. From March 1858 until the middle of 1864 he explored Zambezi. In 1862 Mary Livingstone, David's wife, arrived. She died on 27 April 1862 of malaria. 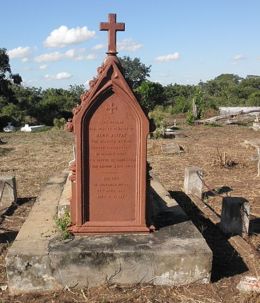 At the beginning of 1869 David Livingstone, was very ill ,he was saved by Arab traders who gave him medicines, and took him to an Arab outpost.In March 1869 he was suffering from pneumonia,he went back to Ujiji,only to find his supplies stolen again. He now had cholera and tropical ulcers on his feet, the slave traders took him as far as Bambara, where the wet season had begun, he had also ran out of supplies.On the 15th July 1871 while he was visiting the town of Nyangwe, he saw 400 Africans being massacred by slavers.This horrified Livingstone, he could not continue his journey to find the source of the Nile.At the end of the wet season, he travelled 240 miles from Nyangwe back to Ujiji, he arrived on 23 October 1871.He was violently ill most of the journey.

David Livingstone was not heard for six years.He was ill for most of the last four years of his life, Henry Morton Stanley who had been sent to find him by the New York Herald newspaper in 1869, found Livingstone in the town of Ujiji near Lake Tanganyika on 10 November 1871,greeting him with the words [6]Dr. Livingstone, I presume? he said Yes, and then I feel thankful that I am here to welcome you. .

David Livingstone died in Chief Chitambo's village at Ilala southeast of Lake Bangweulu on 1 May 1873. It is thought from malaria and internal bleeding caused by dysentery,his journal states that the date of his death, would have been 1 May, but the 4 May is the death date ,carved on a tree, this is the date on his grave . David Livingstone's heart was buried under a Mvula tree near the spot where he died, now the site of the Livingstone Memorial, his body and [7]his journal were carried over a thousand miles by his loyal attendants, Chuma and Susi, to the coast to Bagamoyo, his body was returned to Britain for burial at Westminster Abbey London. 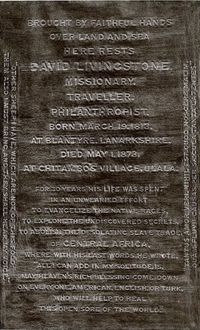 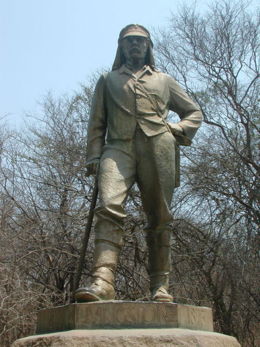 Sponsored Search by Ancestry.com
DNA
No known carriers of David's DNA have taken a DNA test. 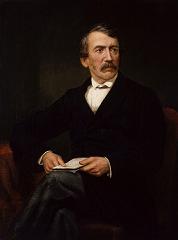 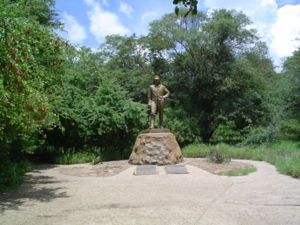 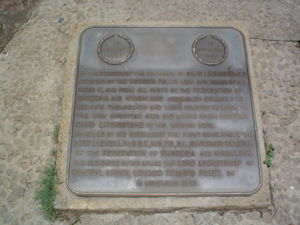 David is 21 degrees from Jaki Erdoes, 23 degrees from Wallis Windsor and 20 degrees from Henry VIII of England on our single family tree. Login to find your connection.