Nicholas Locke was born in 1574 at Brockhampton, Dorset, England. His father Edward Locke "lived at Brockhampton, a hamlet near to Canning's Court, in the parish of Buckland-Newton, of which he was churchwarden in 1573; but his son Nicholas, born in 1574, migrated early in life from the Dorsetshire hamlet to a Somersetshire village.”[1]

Nicholas Locke moved from Dorset to Pensford in Somerset, where he built up a flourishing business, collecting in, and shipping on, the woollen cloth woven in cottages throughout the west of England.[3]

Nicholas and Frances had the following children:[1][3][5]

There may have been another son, Jeremy Locke, born about 1605, who married Elizabeth Kenn, daughter of Edmund Keene.[citation needed]

Nicholas Locke of Pensford, Somerset is mentioned in the 1611 and 1612 Wills of his brother William Locke and his wife Alice Harte.[6]

Nicholas married secondly in 1624, Elizabeth Keene, widow,[5] she “being a well-to-do widow living at Chew Magna, in the same neighbourhood, whose maiden name was Elizabeth Keene. After that, it would seem that he lived in the second wife's house.“[7] Nicholas’ son John Locke married Agnes Keene. In reference to Nicholas’ father Edward Locke — “The elder of these two sons was the father of the John Locke whose life is to be recorded in these pages. On the 15th of July, 1630, at the age of twenty-three, his wife being ten years older, he married Agnes Keene, his step-mother's niece and sister of an Edmund Keene, who, probably, a year or two before, had married his [John’s] sister Frances.“[8] Edmund Keane, or Keene, a tanner of Wrington, Somerset, wrote his will in January, 1628. It was proved in June, 1630. He writes, " A marriage shortly to be solemnized between my daughter Agnes Keene & John Locke, son of Nicholas Locke, of Pensford. Elizabeth Locke, my daughter. My wife, Mary, Extrix."[5]

Nicholas died in 1648, only a few months before the end of the civil wars and the execution of King Charles I. In his will of 25 Aug 1648, made three days before his death, Nicholas Locke bequeathed to his son John certain "tenements and grounds" in Publow parish consisting of three leasehold properties, which John already "held by grant" and which he was to hold for the rest of their term. John was also to have the whole interest in a freehold "messuage or tenement in Belluton" in the parish of Stanton Drew, which Nicholas had bought from one John Feare. Finally, following various bequests of land and money to others, John, who was to act as Nicholas's executor, was willed the residue of the estate. In fact there was further property John Locke owned, and, though its origin is obscure, it may be that this should be counted as part of what he "inherited" from his father Nicholas Locke.[3]

Nicholas Locke was buried at Chew Magna, a village within the Chew Valley, Somerset.[5]

ask our community of genealogists a question.
Sponsored Search by Ancestry.com
DNA
No known carriers of Nicholas's DNA have taken a DNA test. 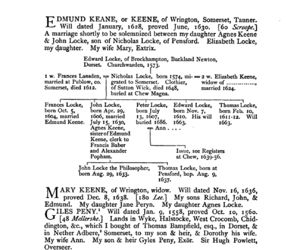 Susan Keil
Locke-284 and Locke-4 appear to represent the same person because: Clear duplicate. Would be nice to "eliminate" long unconnected profile Locke-4. Thanks for considering!
posted Dec 07, 2018 by Susan Keil